Snowmaking HAS BEGUN! More snowmaking and some NATURAL SNOW is on the Way! 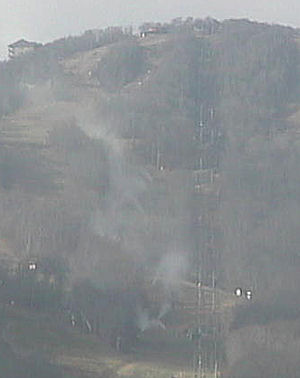 10:35am: Update: – One look at the Extreme Snowboard and Ski Cam across from Sugar shows that there hasn’t been any real progress in terms of snowmaking as yet. The sun is still out and temps have warmed a bit. What the heck – they tried, right?

Watch the live cams to see the snow begin to fall and the snowguns crank up!
<end of update>

I was at it prior to 6am this morning. One glance outside told me that some ski areas might be making snow – there was a blanket of white (frost) on my vehicles. Snowmaking is on the minds of many today. Len Bauer, a longtime Sugar employee who lives on a peak in Banner Elk asked me last night if anyone was making snow because he could HEAR snowguns firing somewhere. He might have been hearing the guns at Sugar Mountain as they did begin making snow overnight and as of this writing at 8:20am they are still at it. They MIGHT be the only ski area in the entire Southeast and Mid Atlantic to be making snow at this hour as we have confirmed that no other North Carolina ski area is. None of the Virginia resorts are and we know that Canaan, Timberline, Winterplace nor Wisp is making snow.

Snowshoe’s Laura Parquette is sick with the flu (Get well Laura!) and they have not updated their snow report in a few days (hey they aren’t open yet) but the temps at Snowshoe are hovering around 32° and I was a betting man I’d say that Ed Galford, Tex Ritter and his crew is making some snow. It is Thanksgiving morning and we’ll get confirmation on that later if we can, but Sugar might be the only ski resort making snow right now.

The GREAT news is that ALL of the ski resorts will be able to make snow later in the day and each of the next FOUR nights according to Meteorologist Brad Panovich. Check out Brad’s latest Skier’s Weather Forecast for West Virginia to North Carolina Ski Resorts!

Brad is forecasting 1-3" of snow for the North Carolina mountains and as much as 6" or so for the snow prone West Virginia resorts. That snow should begin later today and tonight and continue into Friday and perhaps Saturday! The temps should stay cold enough to make snow around the clock for some ski areas and that will make for an opening or two amongst the ski areas. Cataloochee has not been able to make snow yet today, but we heard from Tammy Brown that they will make snow as soon as temps allow later this afternoon! With Sugar getting a head start on the top of their mountain overnight and with some natural snow in the forecast, we COULD see Sugar opting to open sometime on Friday (around noon) or by Saturday morning at the latest. They have been selling tickets so we’ll see when they drop the ropes and let you know.

Appalachian Ski Mountain’s Brad Moretz told us on Wednesday that they will make snow ASAP and even though they can create a darn BLIZZARD with their snowmaking plant, they will not open for this weekend. They might opt for Sunday or Monday but we’ll keep you informed on their opening day as they award the first 100 skiers on the mountain FREE! Moretz told me, "We’re not in a race to get open first. We prefer to create a strong base and let it set up a bit and you can’t do that with skiers on the mountain."

Other resorts in the region echo Moretz’s comments. Either Cataloochee or Sugar will open first and that could come as early as sometime on Friday with Saturday being a better bet. With Sugar’s early lead the smart money is on Sugar.

You can check out the camera across the street from Sugar and see the snowmaking. (It’s pretty foggy so the image isn’t great this AM, but the sun is shining early and that could improve as the day goes on. Then again SNOW is on the way so who knows!?)

We have some AWESOME news to share with you guys perhaps as early as Friday. We’ll give you a hint: We have just finished installing TWO LIVE, STREAMING CAMERAS on the lift towers of two ski areas in the region and we’re going to have some CRAZY fun with these as we’ll be able to show you the smiling faces (and Lord knows what else) of people riding up the lifts as well as some awesome angles for skiers and snowboarders coming down the mountain!

Check out the Skier’s Forecast and have a great Thankgiving FEAST and think snow!