It’s Snowing at the Ski Resorts this Morning! Check the LIVE WEBCAMS at ResortCams.com! 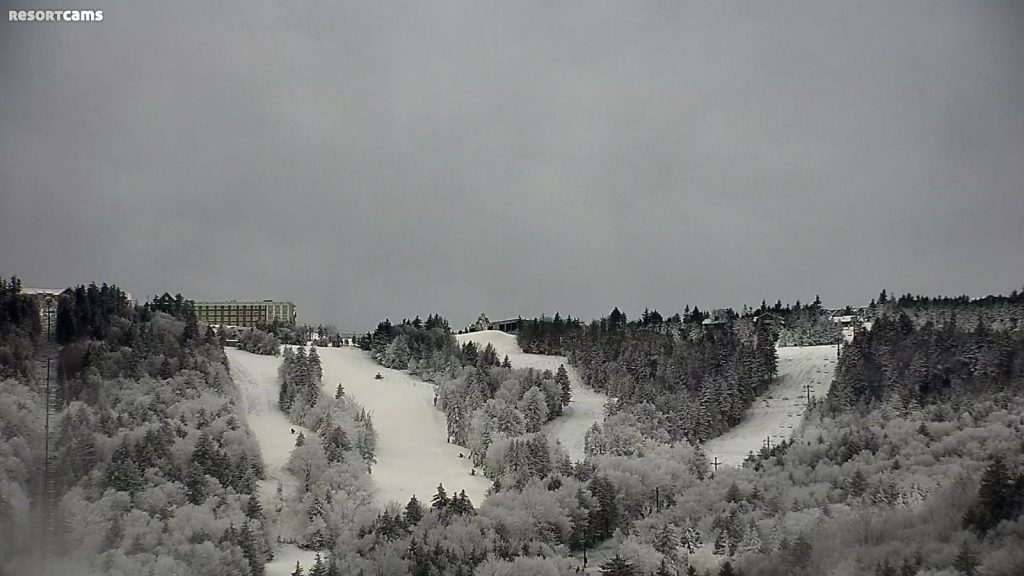 I was looking at the LIVE SKICAMS at Snowsnow and Canaan Valley last night and saw some pretty significant snow falling at those resorts. As I woke early this morning my deck was covered with “underdeveloped snow” (rain). However as I began checking in on the snow reports I witnessed pretty moderate snowfall coming down at Appalachian, Beech, Sugar, and Wolf Ridge in North Carolina. Snow is also falling at Canaan Valley this morning and on top of that THEY ARE ALSO MAKING SNOW! 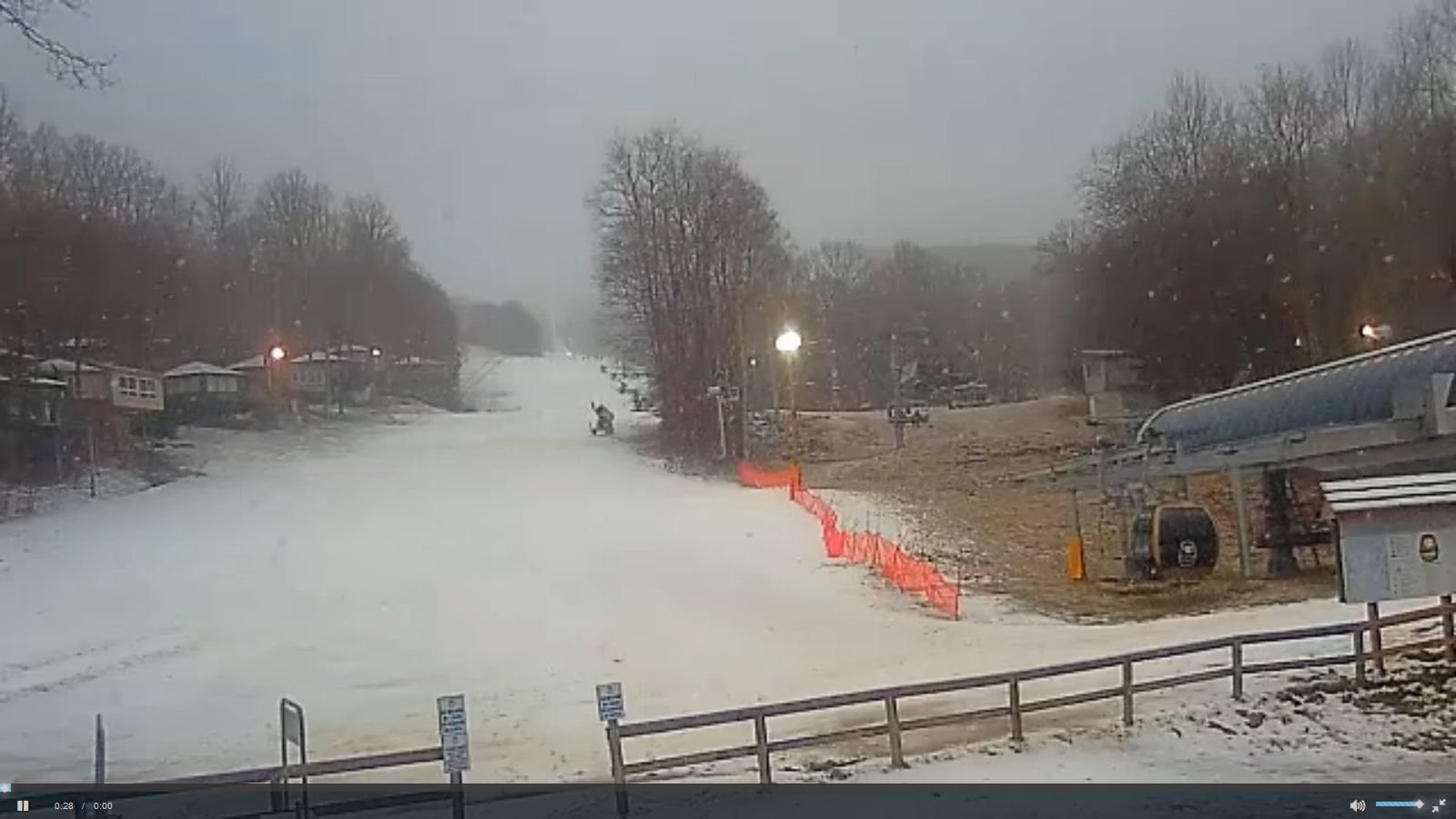 Sugar Mountain this morning via their LIVE CAM. Click to Enlarge!

Since I am based about ten minutes from Sugar Mountain, I naturally had to have a look at my “neighborhood ski area” and it was awesome to see some good snow falling atop the mountain at Sugar Ski & Country Club as well as at the base. They are open for day and night sessions with 4 slopes. I drove by there late on Saturday and the mountain actually looked pretty good and there was pretty brisk traffic on the slopes.

I had to cringe a couple of times though as I was reviewing the snow reporting as Sugar is reporting 2″ of natural snow – AND IT IS CLEARLY NOT. They are also reporting their base as “Natural Packed Powder & Frozen Granular”. As the webcams clearly show – the ground is barely covered on the sides of the mountain. Atop Oma’s Meadow is where Sugar Ski & Country Club is located and our LIVE CAM up there shows some nice, snowy conditions and about .5″ to 1″ of snow. The CoCoRaHs reporter located at The Reserve on top of Sugar is also reporting .5″ of snow this morning. (There is no NWS reporting station at Sugar like there is at Beech Mountain.) 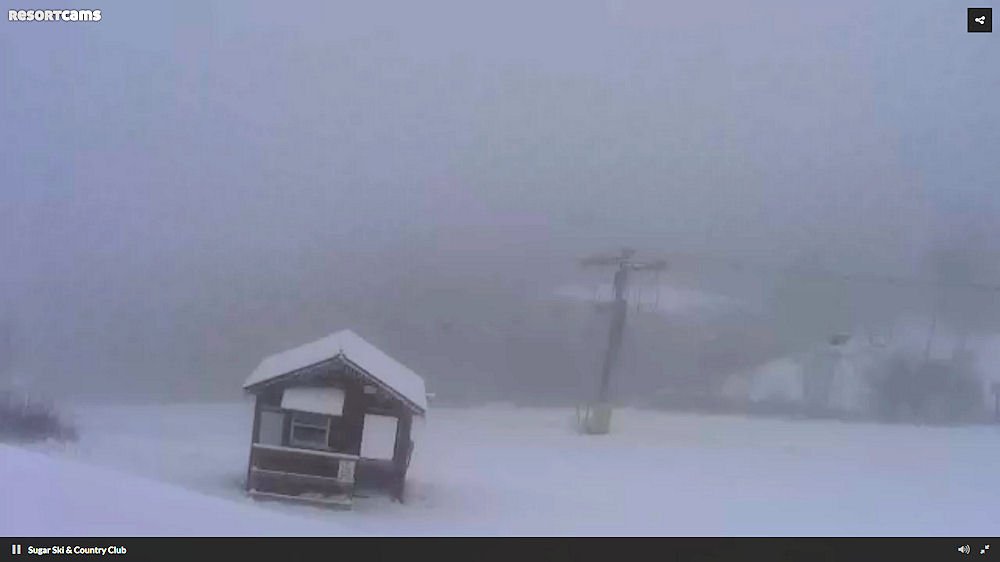 I will say as I continue to update this Morning Report, that there is now about an inch of snow atop Beech as well…so we’ll give Sugar 1″ as well.

Canaan Valley Resort – 23° this morning and it is lightly snowing and they are making snow and building base for their opening NEXT SATURDAY, December 10th.

David Lesher of Canaan Valley wrote, “Trees have become frost-covered. Temp hardly budged from 24F yesterday morning, 25F in the afternoon, down to 22F overnight and now 23F at 7AM.” 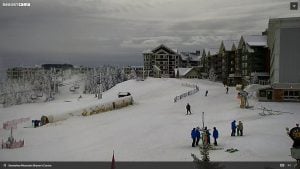 Snowshoe Mountain saw natural snow and they are making snow this morning! Click to Enlarge!

Snowshoe Mountain – 24° and looking like a snowy, winter-wonderland this morning. They are open for day skiing and snowboarding Sunday with 9 slopes and trails. They are not reporting the snow that fell overnight, however the National Weather Service Daily Hydrometeorological Products report is showing .5″ of precip and it is in the form of SNOW!

Shawn Cassell of Snowshoe posted, “The snowguns were running all day yesterday and much of last night, so there is plenty of fresh, groomed snow on the slopes. Today’s temperatures are forecasted to stay low while the lifts are running, so it should be a fantastic day to get out there.”

Progression Park is open with 9 features, including 1 jump. The Mountaineer Parks Crew have been busy this week, putting three new features in Progression Park– a pyramid; a new rail; and the new “Never Summer” feature, the “Pontoon”.

Cataloochee Ski Area is OPEN today! They are reporting 35° at 8am and not making snow. They are open for day sessions Sunday with 4 slopes open from the midstation.

Tammy Brown shared that Cataloochee will not operate during the week of Monday, December 5 until snowmaking weather moves back into the area Wednesday or Thursday.  “We will begin daily operations again as quickly as temperatures and snowmaking allow.  Please check with us for an updated report on Thursday.”

Tube World located in Maggie Valley, across from Ghost Town in the Sky, four miles from the ski area is not open at this time.

It is SNOWING atop Beech Mountain!

Beech is getting its FIRST measureable snow of the season. Okay it isn’t much, but hopefully it is enough to “get the lid off the basket” and now we will see some good snowfall for the rest of the season. Longtime Beech Mountain resident and wearer of many hats at Beech Mountain Resort is also the CoCoRas reporter up on Beech and he is officially calling it four-tenths of an inch of snow this morning.

As of my last look at the LIVE BEECH MOUNTAIN CAMS, it is still snowing.

Winterplace Resort – 29° and no snowmaking or anything falling from the skies right now. Winterplace is obviously holding tight until the frigid blast of cold weather hits later in the week.

Wisp Resort – 27° at the Garrett County, Deep Creek Lake resort. They saw a dusting of light snow overnight but (again) did not crank up the snowmaking equipment. As we mentioned last week, we are getting a lot of emails from the restless folks in McHenry, Maryland who want to do some skiing and snowboarding. However, like I ALSO said yesterday, ski resorts are simply having to play the cards they’re dealt and right now the best plan of action for Wisp is to hold until the cold weather hits in earnest this week. We’re thinking they will have a few slopes open NEXT WEEKEND, December 10th or 11th. 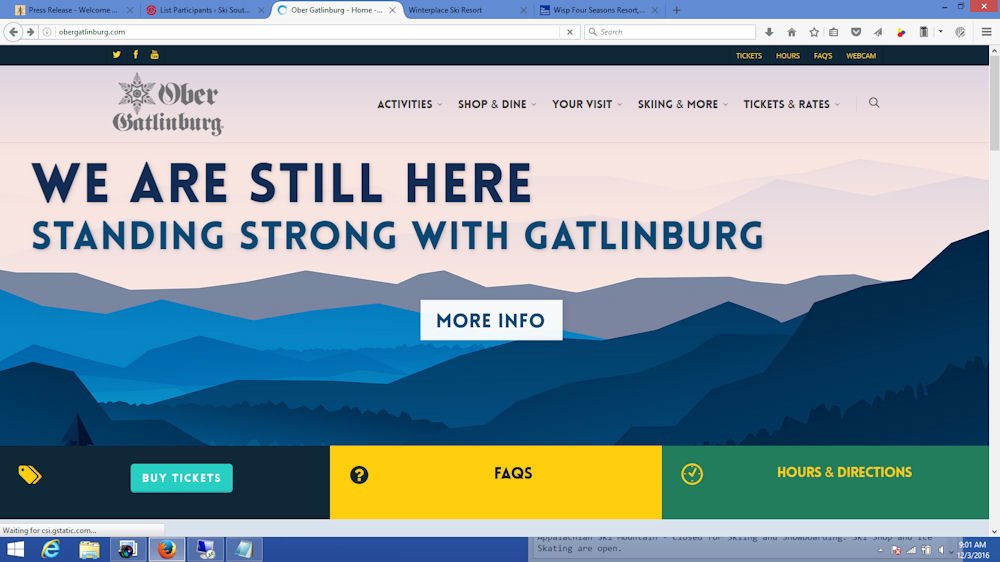 Ober Gatlinburg – 35° and light rain. They made snow for the tubing hill recently but as everyone knows – Ober has been dealing with the aftermath of the devastating wildfires that hit Gatlinburg and the Smokys this past week. Kate Barido and the Anders family who own and manage the ski resort posted this on Saturday, “Due to this unfortunate situation, our operation will be closed through at least Wednesday, Dec 7th, as access to Downtown Gatlinburg is restricted until then. We are gathering information and will give updates as we receive them. Our structures on the mountain and downtown are unnaffected.  Our animals in the Wildlife Encounter are safe.  Please keep our residents and rescue workers in your thoughts and prayers.” 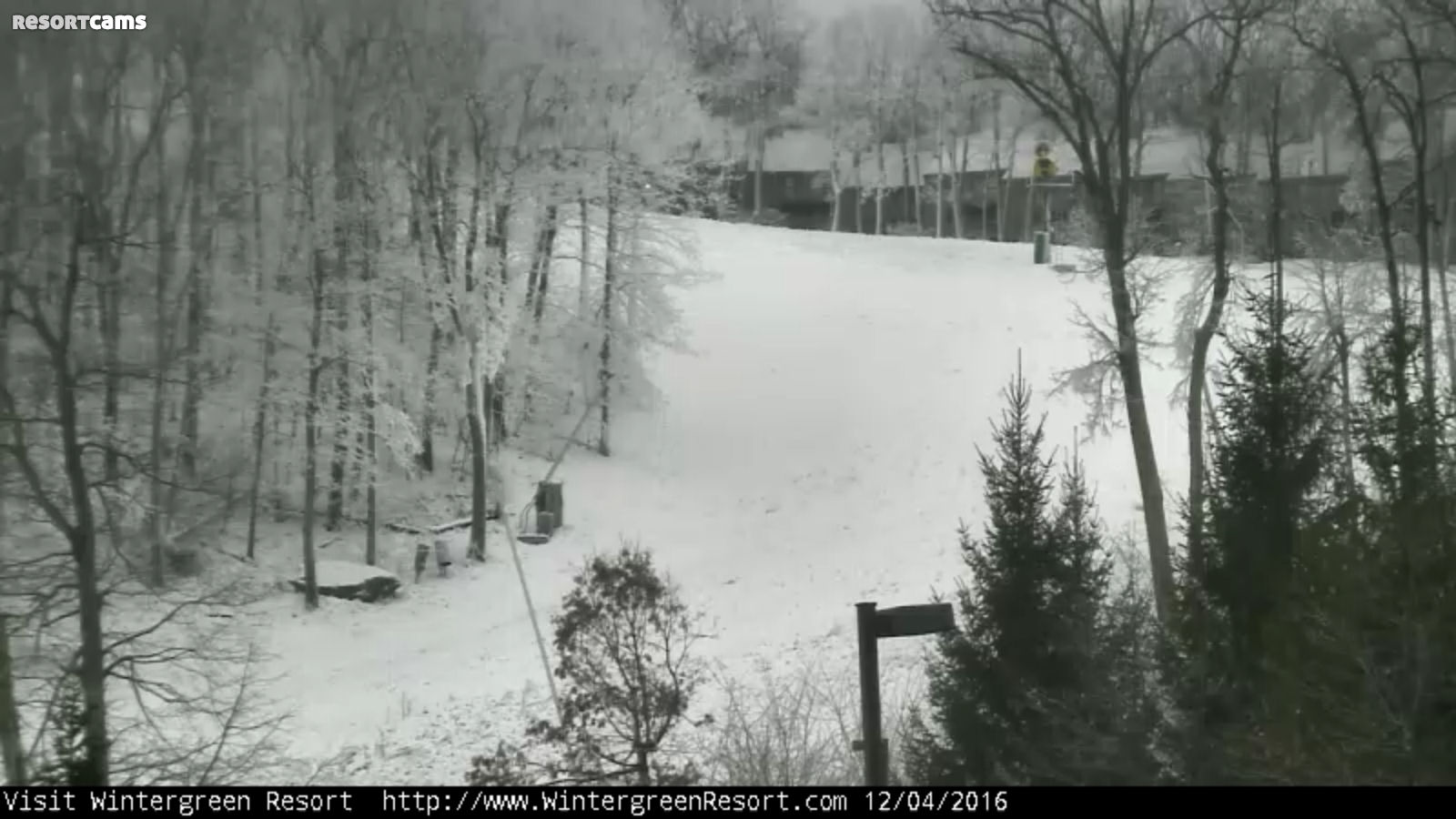 Wintergreen Resort saw a bit of snow overnight and this morning! Click to Enlarge!

Wintergreen Resort in Virginia is getting a bit of light snow and no doubt they and all of the Virginia ski resorts are awaiting the cold, arctic blast that is scheduled to filter into the mountains of Virginia and all of the Southeast and mid-Atlantic later this week.

That’s going to do it for snow reporting this morning. I have some other news to share related to weather and I’ll get that posted asap today.

Stay tuned and check back often!