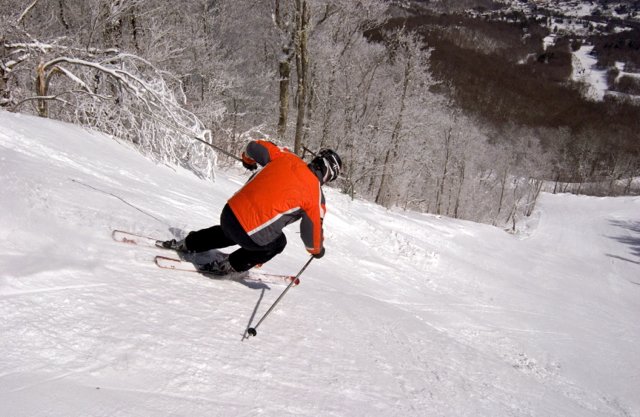 North Carolina ski area operators and tourism officials heard great news about the economic impact of the state’s ski industry in a gathering at Sugar Mountain last Wednesday. Beyond being key to the winter economy of North Carolina’s mountains, snow sport resorts in the state and the entire Southeast have become a critical component of the nation’s ski industry. 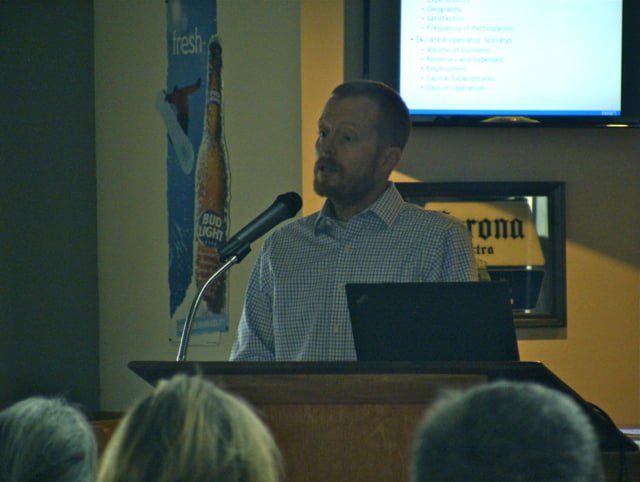 Despite last year being the second busiest in the history of North Carolina skiing—2009-10 was busier with 671,000—even that record season didn’t generate as much economic impact. “The 2014/15 figure [of $197.2 million) is 35.1 percent higher than the 2009/10 number, an average increase of 5.0 percent per year in economic value,” advised RRC. “This level of growth is impressive and shows the continued importance of the ski area industry to the state economy.”

The third such study conducted since 2002, the second by RRC, proves that skiing in North Carolina is really on a roll. Even with the conversion of Ski Hawksnest to a snow tubing and zipline resort, the remaining six ski areas employ more people than in years past. North Carolina slopes employed 1,875 full and part-time workers in 2014-15—a slight dip, but higher than all but one year (2013-14, at 1,891).

Along the way, the economic impact of skiing has grown from close to $120 million in 2002-03, to $145.9 million in 2009-10, to last years’s $197.2 million. That’s happened in part because NC’s slopes have increased their appeal to a regional audience. Five years ago, 56% of the skiers at North Carolina slopes came from inside the state, and 48% were out-of-staters. Last season—nearly 60% of the people who skied in North Carolina came from outside the state, a remarkable improvement.

That could have something to do with the improving economy, but it shows that a solid majority of the people spending an average of $182.84 a day to ski in North Carolina were coming from Georgia (17%), Florida (15%), South Carolina (14%), Tennessee (6%), and farther afield, including Alabama, Virginia, and Texas. 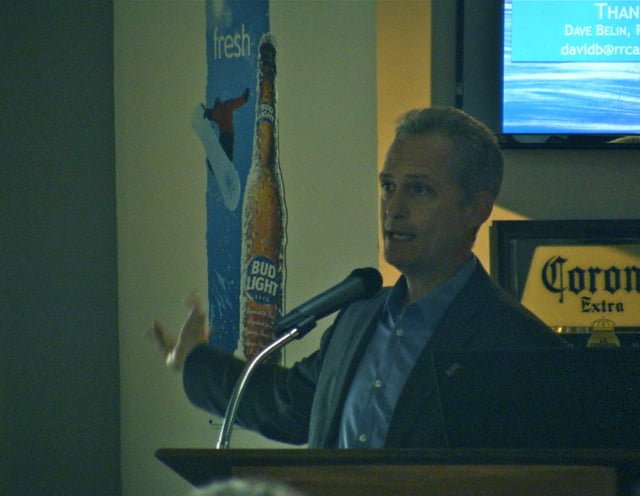 The researchers calculated how much of that cash was spent at the slopes, and how much was spent farther away, but still inside North Carolina. They didn’t estimate the number of jobs that ski spending generated elsewhere in North Carolina, but it is obvious that skiers are buying gas, eating out, staying in motels—and supporting jobs—in many towns and counties across the state.

That’s the real home-run for North Carolina, according to Wit Tuttell, Executive Director of the state’s travel and tourism arm, Visit North Carolina. “That’s huge,” he said. “It means jobs, and the ability of North Carolina to achieve the status of a year-round destination—which is exactly what we need to be.”

The national context of the research is startling. Last year skiing in the United States was down 5% to 58 million, with the Rockies down 2%. The Southeast was down 1.4%, but North Carolina was up 7.5%, which explains why the state comes in a remarkable 18 among the country’s 37 ski states, just behind Rocky Mountain destinations New Mexico and Wyoming, and ahead of West Virginia and Virginia, the former with a significant natural snow advantage over more southerly North Carolina.

The key to those remarkable statistics, RRC reported, is that Southern slopes, North Carolina included, are among the national leaders when it comes to reinvesting their profits in improvements. Perfect example—Sugar Mountain’s new multi-million dollar, state-of-the-art Doppelmayr detachable “Summit Express” chairlift sitting outside the windows of the Last Run Lounge.

The South has other advantages. As the fastest growing region in the nation, the research discovered that North Carolina nicely represents the Southeast where younger skiers make up a bigger part of the audience, compared RRC said, to a state like New Hampshire where the ski crowd is “aging out.” Millennials (age 18-34) and Gen Xers (age 35-49) represent a rising percentage of the ski market—and their participation is growing at a nationally significant pace. Add to that that a remarkable 17% of North Carolina skiers are beginners, and that 43% of groups have at least one first-time skier, the potential for growth in North Carolina (and the Southeast) is much greater than it is elsewhere in the country. Belin said every ski area, and the entire industry, relies for future growth on attracting beginners, then converting them to lifelong skiers. That’s a lot more likely if your customers are young and newbies to the sport.

Another plus for growth, ski groups in North Carolina generally include more people than they do in other ski states. And most importantly, ski groups are double the size (6.8 people) of the state’s typical group of tourists (2 to 3 people). 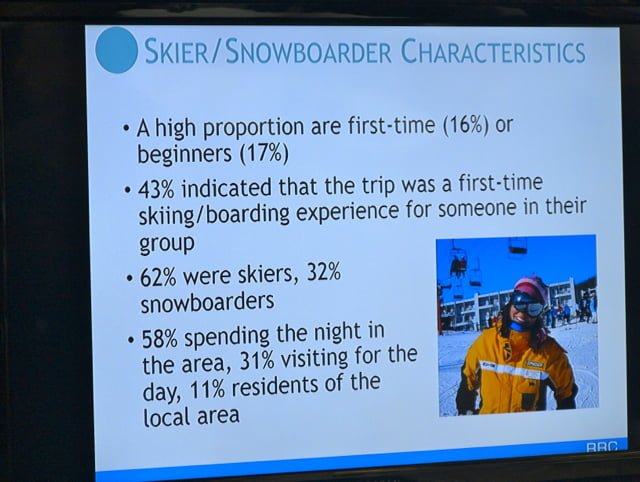 RRC’s presentation was a constant flow of fascinating facts about skiing in the Southeast.

RRC’s Belin called North Carolina (and the region) a “ski incubator” for the rest of the nation. “North Carolina plays a huge role bringing people into the sport,” he said. “Other states can learn a lot from you.”

Other states can also “earn” a lot from North Carolina and the Southeast. As skiing matures in the United States, more and more of the folks flocking to the nation’s biggest slopes in Colorado and California, Maine and Montana—are likely to have Southern accents or zip codes. Many of those travelers will be able to thank North Carolina or Southern slopes for attracting them to the sport and teaching them to ski or board. After years of being taken for granted or overlooked by the ski industry, the future will see the country’s biggest resorts increasingly benefiting from skiing in North Carolina and the Southeast.

Belin and Tuttell both emphasized how important skiing is, especially during the winter when travel usually dips in the typical tourist economy. Even though summer is generally the most important travel season in the cool, breezy mountains of North Carolina, many Tourism Development Authorities in ski country earn most of their occupancy tax in winter. That includes the Town of Sugar Mountain (78%), Beech Mountain (71%), and Banner Elk (51%). The counties count on skiing too, with winter lodging representing 40% of earnings in Watauga County, 41% in Madison County (with Wolf Ridge Ski Area) and 24% in Haywood County (with Cataloochee Ski Area). 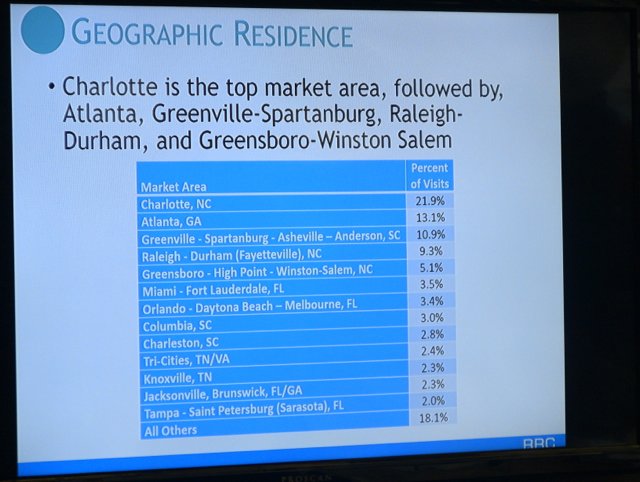 North Carolina slopes rely on major market cities but the bulk of the state’s skiers come in from outside the state.

“These gross occupancy revenues,” wrote RRC, “demonstrate the extent to which the ski resort industry has a real impact on the local economy beyond the ski area’s direct revenue.

North Carolina’s favorable ski demographics include that skiers are an average 36.4 years old, roughly 55% male and 45% female, and make between $50,00 and $150,000 a year. Skiers and snowboarders compare at 62% skiers vs. 32% (with more snowboarders than the 28% national average due to the younger age of the state’s snow sports fans).

Speaking of sports fans, if you thought sports teams like the Carolina Panthers and the Carolina Hurricanes were important to the state’s economy—well, the North Carolina ski industry out scores both those nationally-known franchises when it comes to economic impact.

Unlike local “attractions” such as restaurants and shops that appeal to visitors once they arrive, says Wit Tuttell, skiing is an “attractor, the real reason people come from outside the state to begin with.”

The meeting attracted representatives from all but one North Carolina ski area. Gunther and Kim Jochl attended for Sugar Mountain. Grady and Reba Moretz, as well as Brad and Brenda Moretz attended from Appalachian Ski Mountain. Among other representatives were Gil Adams for Beech Mountain, Chris Bates from Cataloochee Ski Area, and Rick Bussey and Orville English from Wolf Ridge Ski Area.