20° and Making Snow Around the Ski Mountains 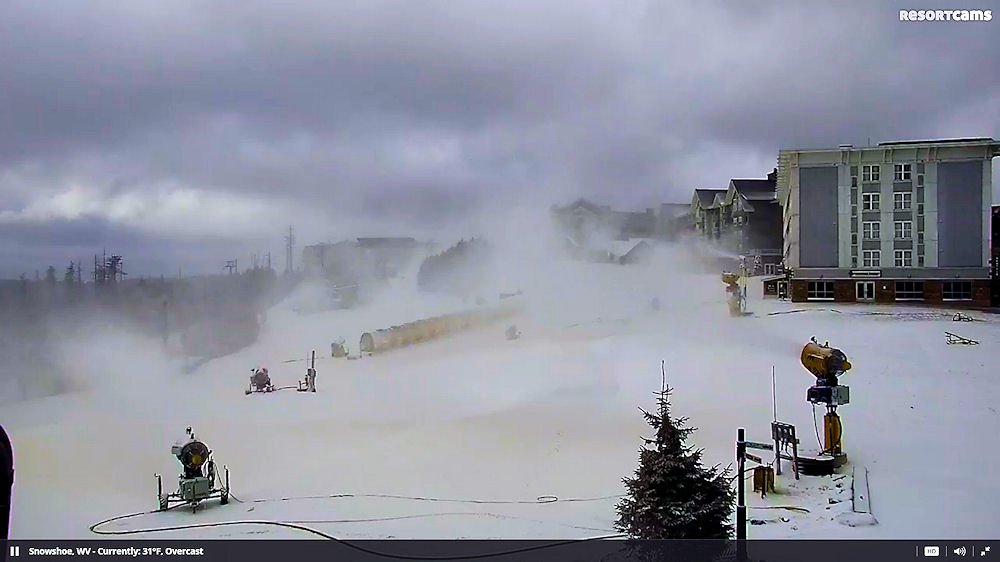 Light Snow is Falling This Morning at Snowshoe Mountain Resort

…and there are some ski areas making snow as of 8:30am. However no ski resorts are open today.

No snowmaking was happening anywhere else; not even the usually colder and snowy West Virginia ski areas.

Canaan Valley, Timberline and Winterplace resorts were all still showing nothing but grass. One still has to remind themselves that it IS only November 22nd and that most of the WV resorts wait into mid-December to open anyway. So there’s nothing to worry about at this stage. It is, after all, pre-Thanksgiving weekend. 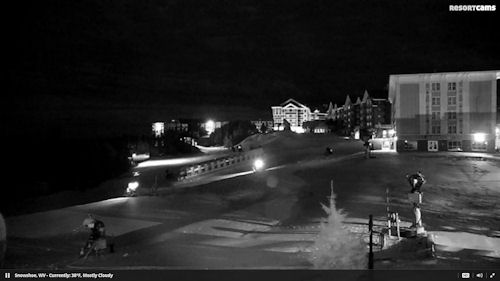 Snowshoe’s snowmaking equipment was quiet at 7:30pm as temps hovered around 38 degrees.

Snowshoe Mountain Resort looked pretty ready-to-open up top as their snowmaking efforts of the previous few days produced really good results. However on this particular Saturday night – there was no snowmaking going on there either.

In fact, temperatures at Beech and Sugar Mountain didn’t drop to literal freezing until 4am this morning and then things really got cold as temps nosedived to 20.8° at 8:36am this morning. Sugar Mountain’s low temp this morning was registered at their summit at 8:52am (minutes ago as I work up this update) and it was 21.5°.

THOSE are optimal snowmaking temps.

It is 20° on the nose at Snowshoe Mountain Resort this morning and we’re seeing a little evidence of a dusting of natural snow but they are not reporting it. In fact that got me to thinking – we haven’t SEEN any measurable snowfall YET at ANY of the ski areas of the Southeast and mid-Atlantic.  THAT IS VERY, VERY UNUSUAL.

Snowshoe shows NO measurable snowfall on the season through Nov 22nd.

Just to be clear – no ski resort in the region has seen any measurable snowfall to date. That has to be some kind of record. I don’t have time to dig through the research for records this morning, however I CAN report that as of November 22nd, 2014 Beech and Sugar mountains had already seen EIGHT mornings with measurable snowfall totaling 12.1″ of natural snow.

So we are some one to two feet of snow UNDER what we saw this time last pre-season.

We ARE Getting Some Reports of Snow Flurries this Morning

It’s a start, right? We witnessed some light snow falling at Snowshoe this morning and we’ve gotten a few texts from friends about some light dustings around Beech Mountain.

MORE importantly – we are seeing some snowmaking happening. As I toured the ski mountains via all of the live, webcams, here’s what we saw:

Beech Mountain Resort – making snow at 20° – and things are looking quite “Beechy” although there is some pesky fog blocking the views.

Cataloochee is making snow and will reopen soon.

Hawksnest’s Tubing is making snow for the first time this season. They are blasting what used to be the #1/#9 golf holes with a blizzard this morning. Hawksnest does a nice job with the tubing operation these days – although there’s a HUGE part of me that misses that ski mountain. 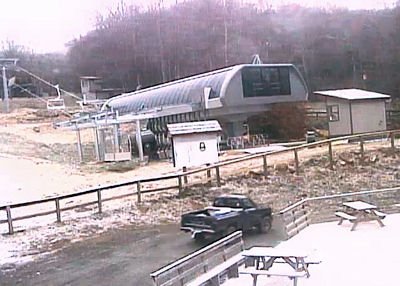 Sugar Mountain Resort – making snow at 21° but the base area still needs a lot of snowmaking to get them open. We noticed the lift moving a bit but it must of been transporting snowmaking crews.

With these kinds of snowmaking temps, Sugar can open in one more day, so we’re kind of expecting a Monday reopening although Sugar COULD opt to protect their snow and hang on to it until mid week for Thanksgiving skiing and snowboarding. That is sheer speculation on my part though.

Canaan Valley Resort – We’re seeing some light snowfall at 10am but no snowmaking happening. Canaan Valley has a planned opening date of December 18th so they are no doubt waiting on the next round of consistently cold temps to begin making snow for the season.

View their LIVE CAM to watch the snowfall! 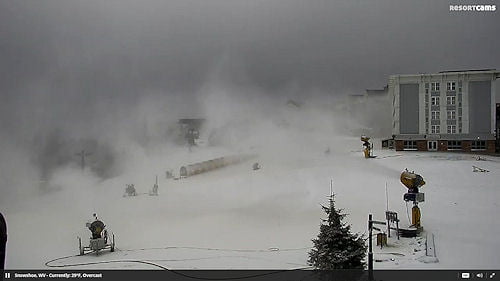 Snowshoe is receiving some light snowfall and great snowmaking this morning

Snowshoe Mountain – Lots and lots of great views to watch the natural snowfall and the snowmaking happening! Here’s a link to the SNOWSHOE MOUNTAIN BASIN WEBCAM which is situated across Shavers Lake. It offers some awesome views of the mountain all season long.

However the best view on the mountain right now is from atop their 4848′ elevations at the Village area. The image above is from the SNOWSHOE MOUNTAIN WEB CAM at Shavers Center.

Winterplace Resort – they are making snow for the first time this season and temps are hovering at around 32 degrees as of 10:22am. Check out the WINTERPLACE SKI RESORT WEB CAM to see their snowmaking efforts. 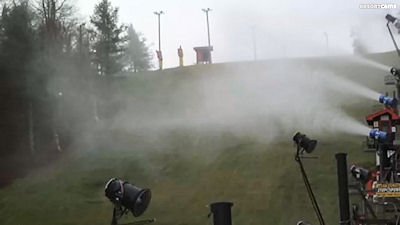 Snowmaking was happening earlier but nothing was sticking.

Appalachian Ski Mountain – WAS making snow at 8:30am but it obviously wasn’t hanging around…so the snowguns were turned back off.

Sapphire Valley Ski Area – nothing happening quite yet but they don’t tend to start making snow until the first week or so of December to open just PRIOR to Christmas.

Timberline Resort – no snowmaking just yet, but they don’t plan to open until December 11th anyway. Tom Blanzy and his crew will have the snowguns firing with the next round of colder air.

The Virginia Ski Areas – there is no snowmaking happening at any of the Virginia ski areas. 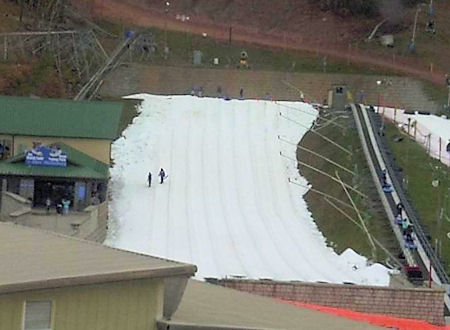 Ober makes a special kind of snow to operate their tubing park.

Ober Gatlinburg – There’s no snowmaking happening at Ober, although they ARE open for tubing.

The fact that Ober is OPEN for tubing prompted a few questions about HOW they can have snow on their tubing hill and not anywhere else. That is because a couple of years ago Ober began implementing two different types of snowmaking. The weather is certainly a bit more challenging over in the Great Smoky Mountain National Park and it has been especially so over the last three seasons.

Ober decided to take matters into their own hands with something called “Snow Crystal”. Basically the ski area has the same kind of snowmaking that you’ll find at all other ski areas in the region. Across the ski slopes that have traditional snowmaking equipment where you “shoot water up in the air” and the cold air freezes it and it fall to the ground as snow. HOWEVER on their tubing hill they use a system where they actually freeze everything inside a small building and then blast it out as snow. Again, they call it “snow crystal”.

Snow tubing is hugely popular at all ski areas and you may begin seeing resorts go to something similar.

Well HOW ABOUT THAT for an in-depth tour of the region on this pre-Thanksgiving Sunday? Enjoy your day and THINK SNOW! THINK COLD!