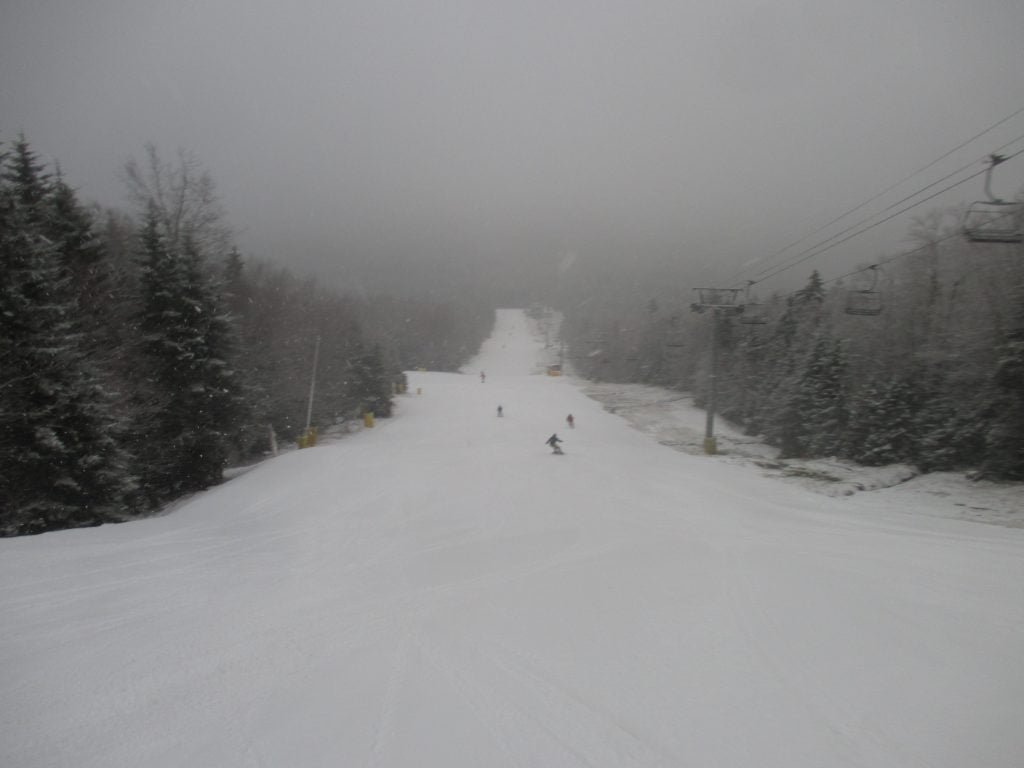 And number twelve is in the books, the record book in terms of attendance with over a hundred people coming together this year and a good time was had by all that I met. Allow me to break down some of the highlights. I arrived towards nightfall on Friday; interestingly I had been given an opportunity to be part of the Snowmobile Tour that Snowshoe runs after the lifts have closed but, regrettably, knew I couldn’t arrive in time. However, as I was unpacking my things at Highland House, I heard the racing engines and saw the beam of headlights sweeping across the slope outside my room. The tour was on and it looked like a blast. I stepped onto the porch shouting, “You Kids get off my Lawn,” but no one paid me any attention.

All settled and geared up, I resolved that having missed that adventure I would make my way to Silver Creek and to ski there until the lifts closed. The rain had been steady all day, but when I got off the shuttle it had just come to a stop, and did not return for the remainder of the summit. Still, the wet had done its part for crowd control and the runs were as empty as I have ever seen on a Friday night session. It was mostly just me and mashed potatoes, but I did meet the longest traveling Summit attendee, Lou from Miami; as often happens, we both knew we shared a SkiSoutheast kinship even before we spotted any identifying stickers.

Saturday morning was the time to find a core group of SkiSoutheaster’s, the Captain and his crew kept their streak alive; hard to believe I’ve skied with this group at Snowshoe and Beech for over a decade now. A lot of friendships have been made thanks to this website. By the way aside from the videos and writing that has already appeared on this page; check out Frances Miller’s trip report on the message board, Ski Pink always represents. https://www.skisoutheast.com/messageboard/viewtopic.php?f=116509&t=645600&p=654835#p654835. 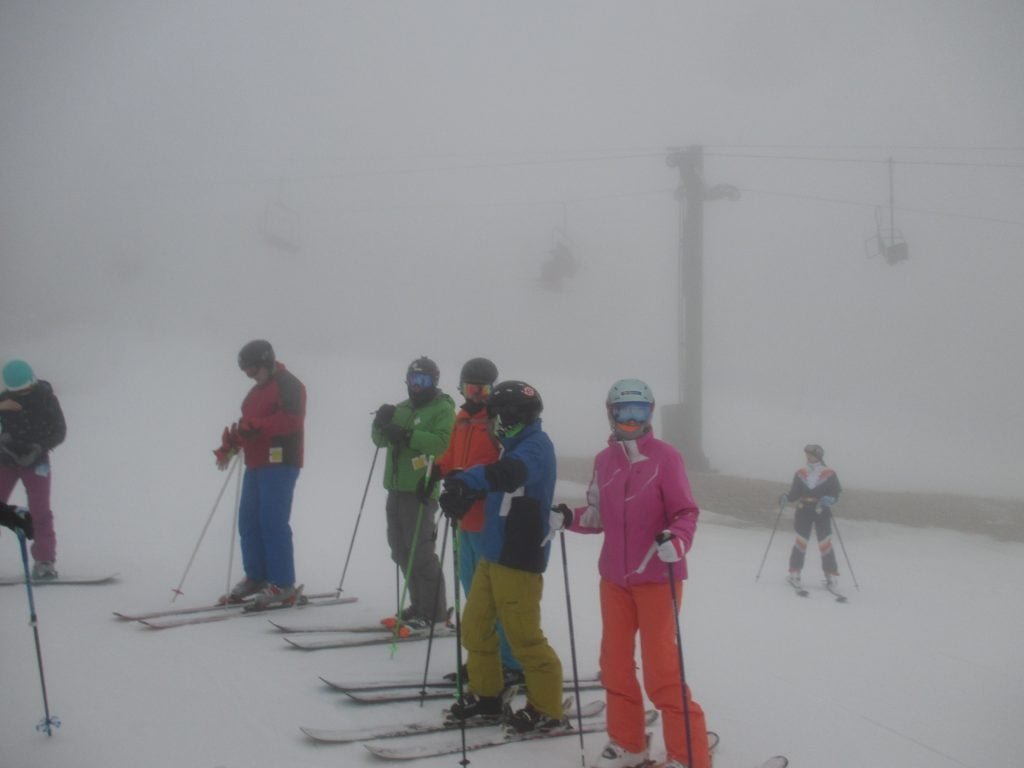 Lunchtime at the Boathouse under Ballhooter lift we all gather and celebrate. And talk about party favors, not only did Mike provide food and drink, but bestowed literally dozens of boxes of SkiSE swag. Beanies, t-shirts, hoodies; the stuff was just spilling out. All attendees were satisfied, and my guess is that a lot of people who had never heard of the SkiSoutheast Snowshoe Summit before are sporting a t-shirt now wherever they call home. 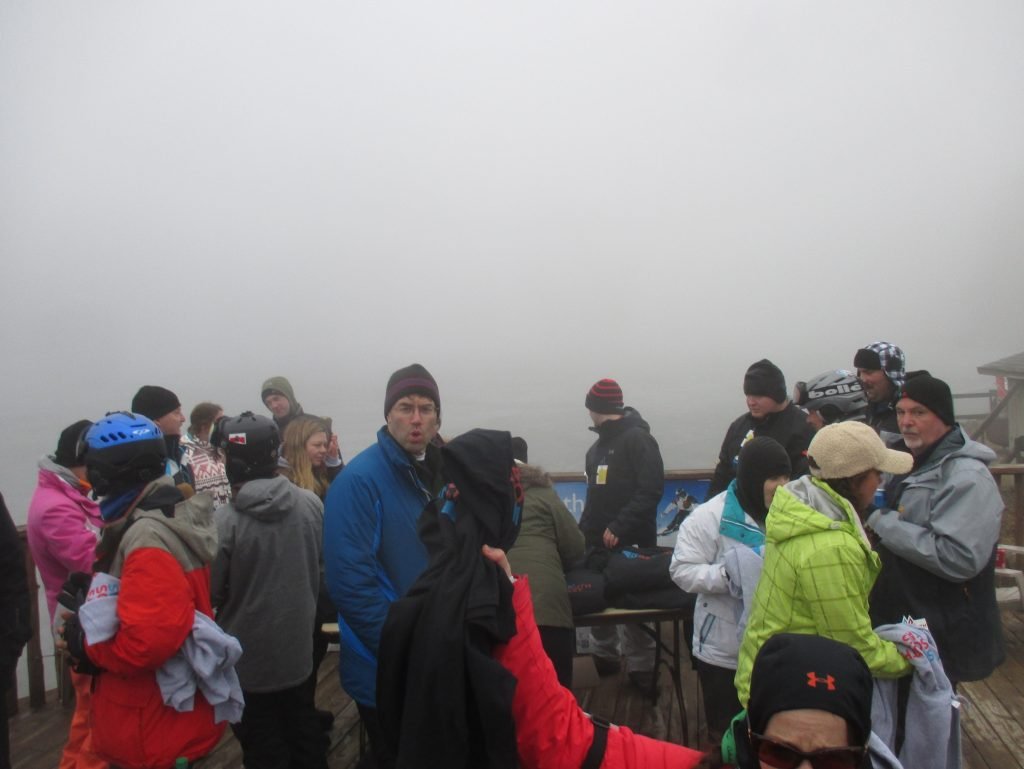 As always Snowshoe was a perfect host, with lodging specials and all terrain open. We were certainly not the only ones on the mountain, but I skied a lot of the busiest times with fellow attendees and Snowshoe regulars Tom (Spydee) and Steve (Swoop). While I have always heard of various strategies for avoiding lift lines on a busy day, it was surprising how well their strategies worked, even on the main lifts. Of course, Western Territory and Silver Creek can usually offer some relief. All day and into the night, Saturday was (as Sean Cassel would say), Ikonic. 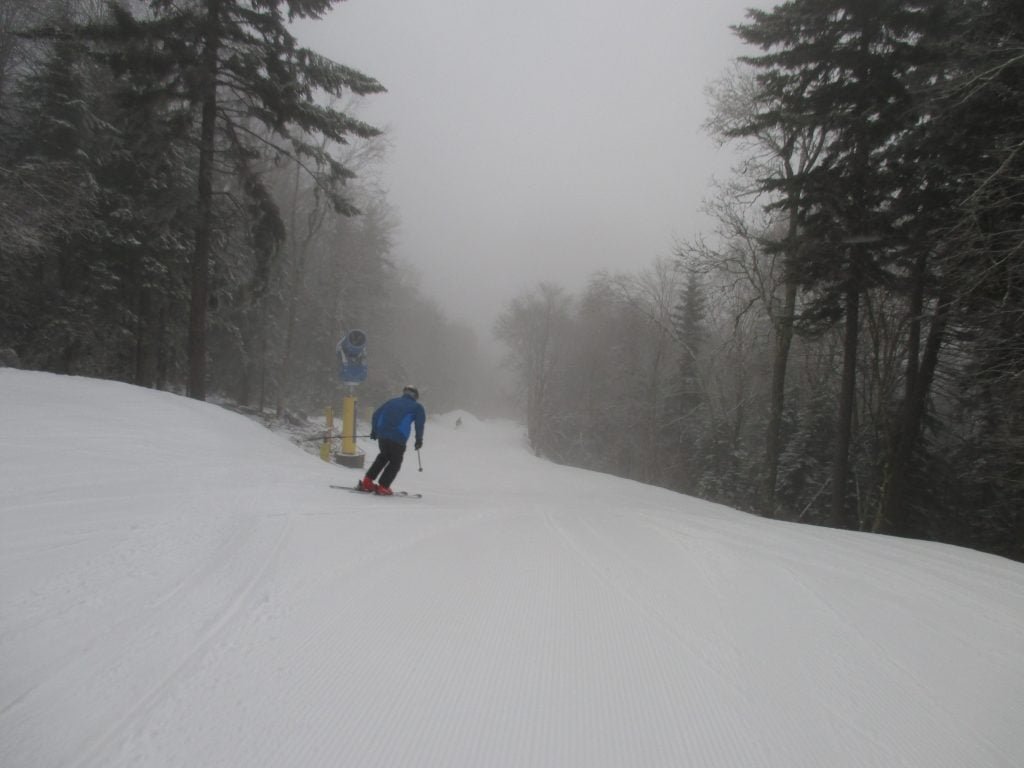 First Tracks and a First Ask
Sunday morning provides Summit attendees with a special treat, not only do we get a free all-day lift ticket, again thanks Snowshoe, but we get the Soaring Eagle Lift and associated runs all to ourselves for almost an hour before rope drop. This year that was sweetened by a fresh coating of snow on top of the base; it was by no means a powder event but that one or two inches made a huge difference in the snow quality. With the warm temperatures, conditions were a little beat up by the close of Saturday, and this refresh and the nights grooming work made for our best runs of the weekend with only ourselves to track them. 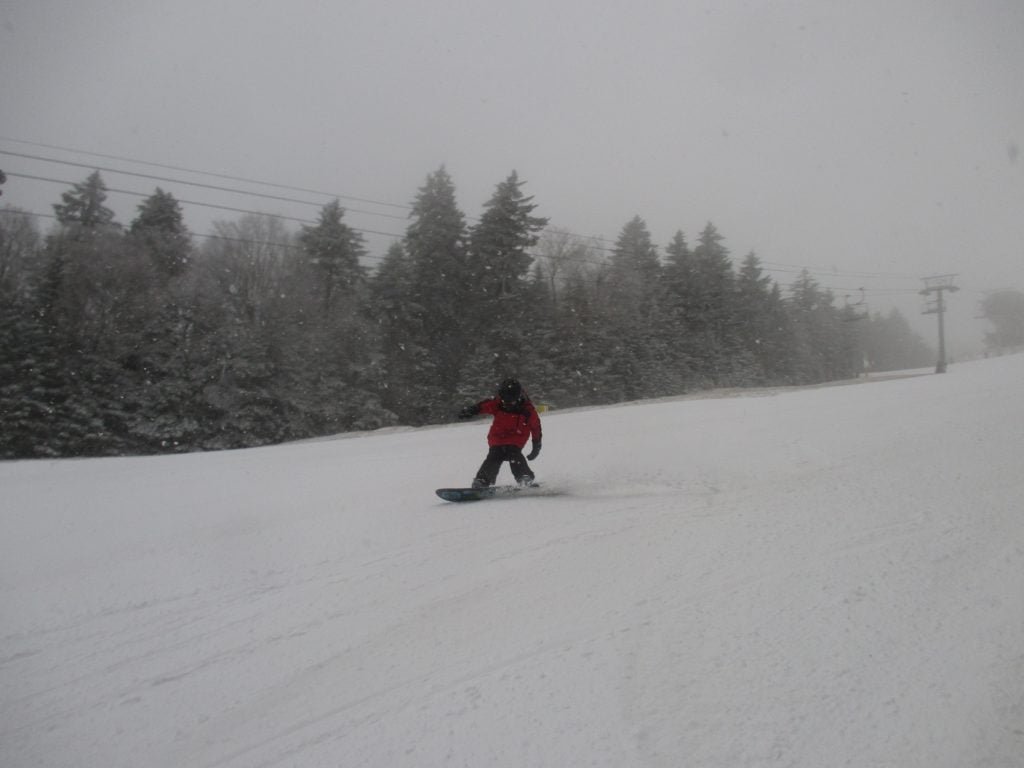 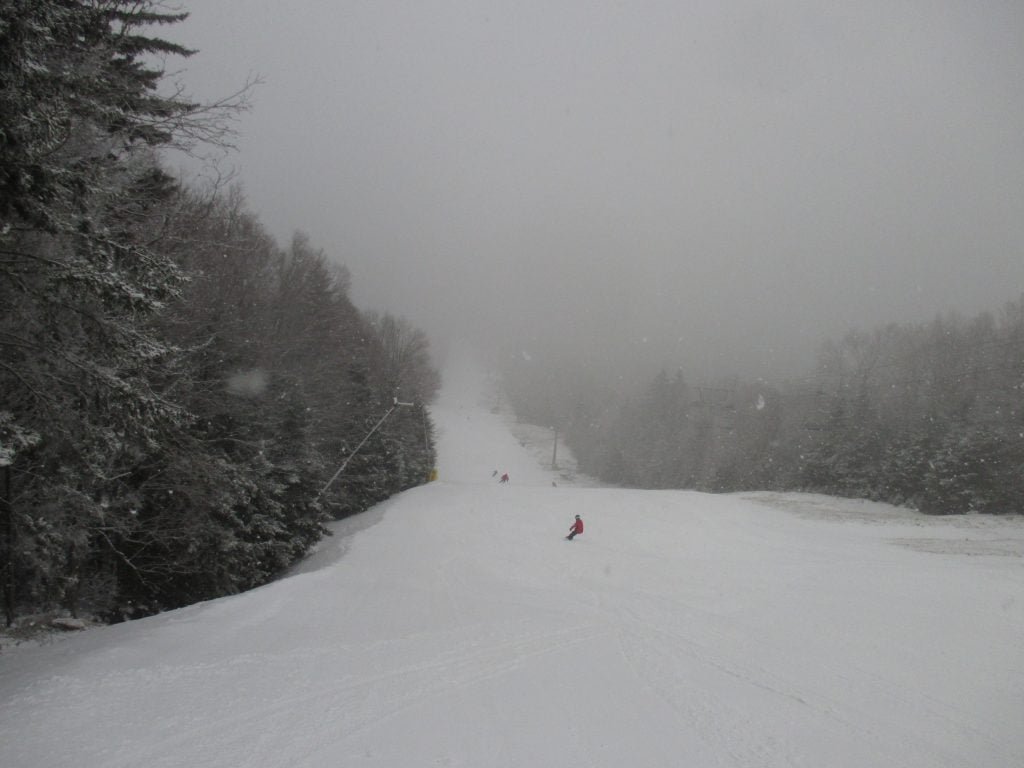 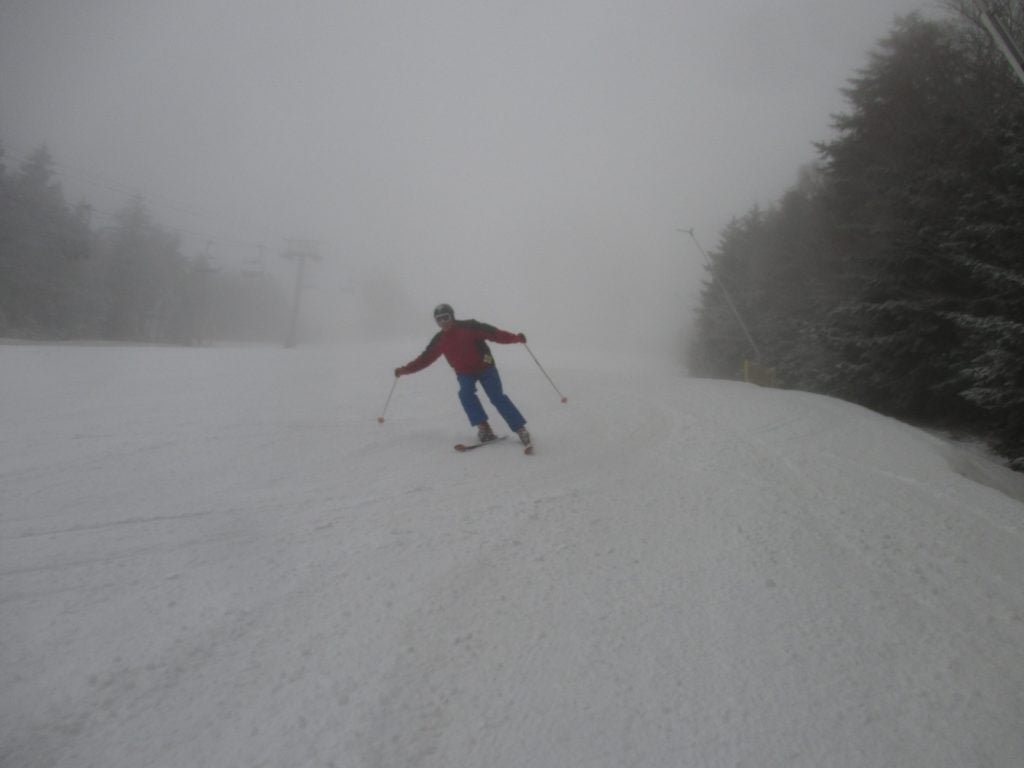 Along with the record turnout those of us who made first tracks were treated to another Summit first. Justin Harris from Canaan Valley Resort joined us and was slated to do his own snow report that morning; in fact, he took the opportunity to propose to his now fiancée, Marcie.

This was my first time to meet Marcie, but I have gotten to know Justin through the course of this season and I am so happy for them both, and they looked very happy too when I skied with them later on Cupp before I had to head home and bid another Summit farewell. 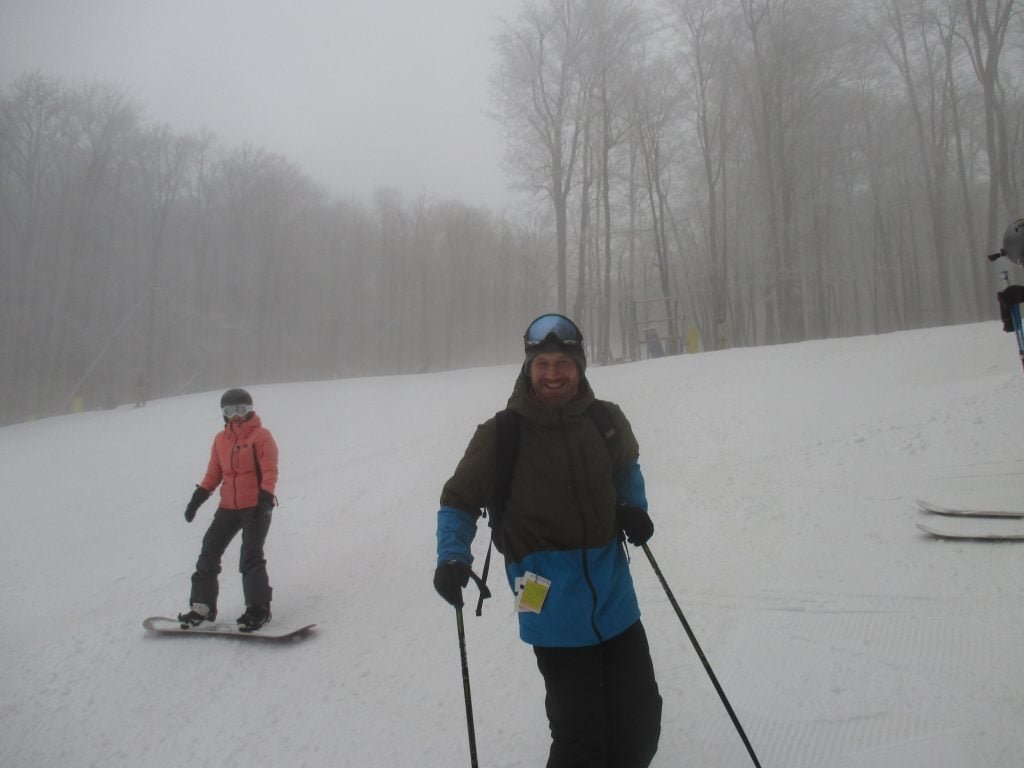 So, the Summit is done, but Snowshoe and skiing throughout the region are far from it. Check out the webcams… I mean really, do it now, it’s a beautiful sight to behold. Who’s in for a mid-March mini-summit? There’s still plenty of venues to choose from, dare I say all the way to April for some? Yes, I think I’ll make that bet.