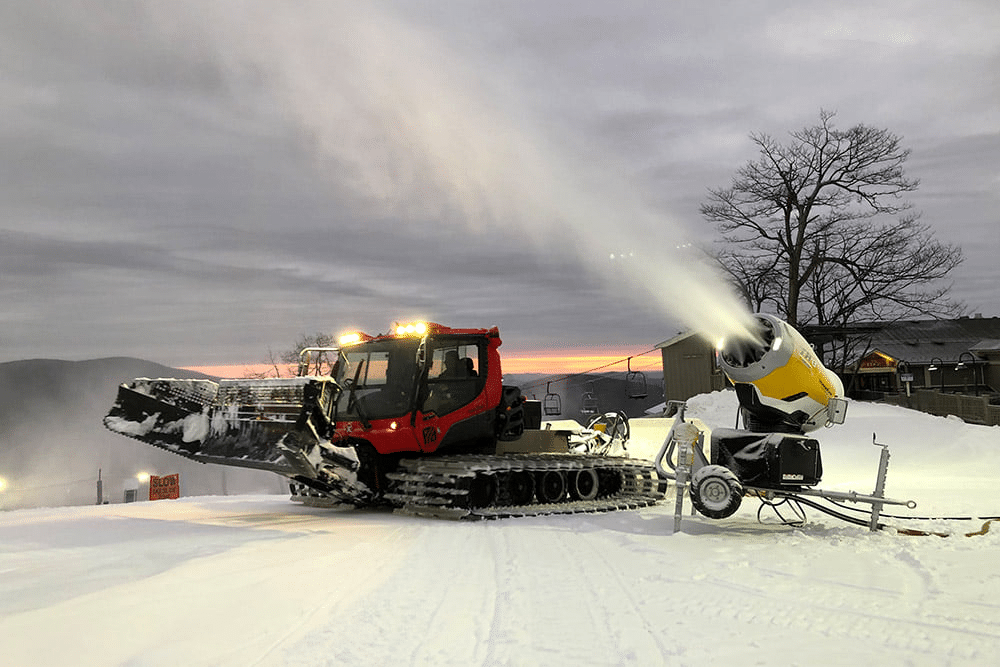 The clouds of snowmaking that was happening this morning at various ski resorts was making some of the photo captures from the LIVE webcam streams a bit on the blurry side. However, that was a welcome side effect as snowmaking is just what the doctor ordered to treat any leftover ailments from all of the rain that hit the ski resorts these last several days. We just went through some SERIOUS spring-like weather.

A little trace of natural hasn’t hurt either – as a few resorts at the highest elevations saw a little dusting of snow this morning. A few resorts were even “snogged in”.

With that light, dusting of snow and brighter skies this morning, Winterplace Resort may be the winner of today’s “Snowyland Beauty Contest”.

Back to “damage control” and how much damage was done to the slopes and trails of our ski resorts of the Southeast and mid-Atlantic.

In two words (twice) – a lot AND not really.

Okay, that’s probably confusing. Depending on whether the rain gauges at various weather stations were reporting accurately or not, every mountaintop within our region, from Wisp Resort in Maryland down to Sapphire Valley in southwestern, North Carolina saw significant rainfall over the last four days – going back to Tuesday, February 22nd. Based on some of those weather stations, anywhere from about 1-2″ of rain fell at Massanutten, Wintergreen and the Virginia mountains. The West Virginia mountains saw from 1.80″ of rain at Snowshoe, to 1.94″ at Canaan Valley.

The real “winners” / losers in the rainfall “debate” were our ski mountains in North Carolina and Tennessee which picked up anywhere from 2.50″ at Blowing Rock to 2.81″ of rain at Sugar Mountain and as much as 3.34″ of rain atop Beech Mountain.

However you want to look at it, I was fortuitous on last Saturday, amidst a run of very favorable, cold and snowy weather – to document the base depths at all of the ski resorts in the region. …and I’ve added in a column for what is being reported this morning. (Note some are marked with asterisks as those resorts either don’t do a good job of adjusting base depths or they report a ‘one number average’ and it isn’t as noticeable. 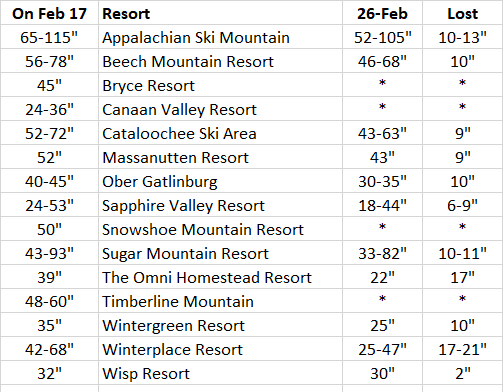 As much as base snow HAS dropped, it is important to note that there is STILL a ton of snow on the slopes.

Base depths at our ski areas were (and still are) so deep, that they were able to push snow around and hence Saturday and Sunday will be…

Business As Usual…for all but ONE…

In a bit of a SHOCKER / NO SHOCKER, Wolf Ridge Resort in Mars Hill, North Carolina just called it quits on the SEASON!

This was posted on the home page of their website:

“Unfortunately, due to the warm temperatures and rain our base has been depleted. Therefore, with much sadness the 2021-22 ski season has come to an end at the Wolf!”

We reported it via Facebook this morning and in less than one hour the post has reached 1,043 people and pulled 15 comments and none of them are nice.

It is a shame. As we have reported numerous times over the last several years now – if Orville and Wolf Ridge didn’t have bad luck, they would have NO luck. Wolf is very popular within its core fanbase and they have had some glory years, but it seems that everything kind of began to go south on them at about the same time, in 2005, when investors came into the area and bought up Wolf Laurel – as in Wolf Laurel Country Club, Wolf Laurel Stables, Wolf Laurel Real Estate and forced every entity that was using “Wolf Laurel” in their name to cease and desist immediately.

What WAS a fairly successful Wolf Laurel Ski Resort, became Wolf Ridge Resort or “Ski The Ridges” and within a year or so along with some infusion of money/investors, the place LOOKED to be ready to make a huge step forward. There was the new (at that time) exit off of I-26 which would make them even more accessible. There were new trails cut and a gorgeous lodge built…and then the financial crash of 2008 hit. Mix in a ton of controversial, bad luck and fires that destroyed the new lodge and damaged lifts in 2014…and they’ve pretty much been snake-bitten since.

While we are not 100% certain – we are thinking that Wolf’s closing for the season on February 22nd – might be their earliest shut down in their history. You’ll have to check out the Facebook post as the comments are not flattering.

So there you have it – one ski area has already thrown in the towel on the 2021-2022 Ski & Snowboarding season.

Check out the temperature differences across the region in this quick glance look at all ski areas:

27° The Omni Homestead Resort – Not sure about snowmaking – 22″ base – 3 of 9 slopes open and Tubing & mini snowmobiles open today!

The Forecast for the Week Ahead… 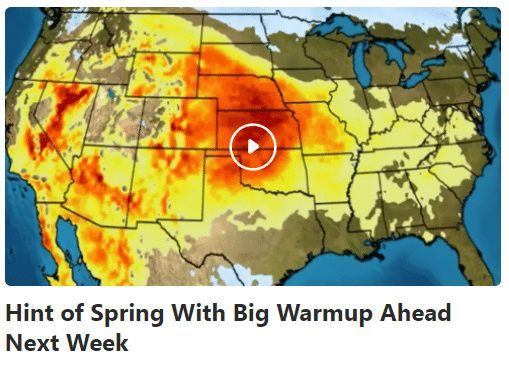 As you saw from the Quick Glance look above, some of the ski resorts were able to make snow last night and some even picked up some ambience snowfall. Meteorologist Brad Panovich provided a Skier’s Forecast video on Friday and you should check that out. He shared that we could see some light snow Sunday night and snow snowmaking opportunities for SOME, but not all ski areas over the next few days. Brad’s been doing an awesome job of frequently updating our/his fanbase and we’re certain he’ll shoot us another weather video update next week.

What we can tell you is that it certainly looks like we may see a real, Spring-like pattern of temperatures into the upper 40s and 50s (and some areas even milder) over the next week. So we will probably see those base depths regressing a bit more. Thankfully, the ski resorts have plenty of base snow for the time being, but here’s hoping for at least a couple more bursts of cold air and even some natural snow.

Ski Southeast Forecast for Feb 25, 2022: The return of snowmaking temperatures.

We’ll be making snow at every opportunity in the coming days. Starting tonight, we’ll turn the snow guns on to blanket the mountain once again for a fantastic weekend setup. Get out and hit the slopes – there is still plenty of winter to enjoy!