Six More Weeks of Winter – I TOLD YOU GUYS!

Told you guys the fix was in! (See Monday’s post.) Six more weeks of winter. My brother from another mother, Guido was seen sliding quietly away from the crowd of onlookers this morning just moments after Punxsutawney (puhnk-suh-TAW’-nee) Phil waddled out of his cave and announced (or texted according to some reports) that we’d have six more weeks of winter. Minutes after the annoucement Time Magazine had already posted the "bad news" as they put it – that winter would last at least another six weeks.

Some of Phil’s inner circle had made last minute attempts to influence him to change his prognostication because PETA was pressuring the furry little critter to predict an early Spring. However, our behind-the-scenes "influence" made the difference and thankfully we’ll be seeing more cold and snow for several more weeks.

My buddy Joe Stevens, who serves multi roles within the ski industry, just called me to inform me, "The members of the West Virginia Ski Areas Association FULLY SUPPORT Punxsutawney Phil’s "STIMULUS PACKAGE" and appreciate the forecast for another six week’s of winter."

Joe also said that he heard reports that this decision was possibly influenced by a choice provided to Phil of either forecasting the added six weeks or becoming "groundhog sausage".

(That supports our "brother Guido" inside information.)

According to some of our readers, former Vice President Al Gore – being the great humanitarian that he is – has offered his services as a replacement to Phil – since PETA has previously suggested Phil be replaced by a robot. Hmmm, it makes sense to replace the idea of a robot with "Woody" doesn’t it?
If Mr. Gore were the prognosticator then I guess we’d never have anymore winters at all!

Has anyone else noticed that even though several news agencies have reported months ago that all of the global warming and climate change stuff was bogus…that we still have our President and most politicians absolutely ignoring that news and carrying on business as usual with their propaganda machine? Funny thing is I saw a remake of the polar bear trapped on a small piece of ice video again recently and thought that in reality those poor polar bears are actually going to be having a hard time finding WATER if the ice caps continue to grow like they have recently. The Arctic ice cap grew again this past year after it grew a reported 30% from 2007-2008.

What about the Antarctic ice? Since August 2007 it has grown by nearly one million square kilometers. Several university studies are now supporting the fact that we might be entering a mini ice age in about ten years that will last 60 to 80 years. You guys can Google “Scientist Predicts Ice Age Within 10 Years.” for that content.

Those poor polar bears don’t know what to do. They got all of that publicity and sympathy from people worrying that they were trapped on ice and since polar bears can’t swim – they’d all drown. Evidently they’ve quickly adapted because Jack Hanna and other experts say that polar bears can swim over 100 miles at a time if and when necessary. (Not sure how they know that but it does debunk the "drowning polar bear" conspiracy!)

Several groups are now focusing their attention on the mini ice age to come and a few seem concerned that polar bears will indeed begin to have difficulty in finding water.

Never trust a politician who wants to raise taxes, especially when those taxes are going to an international banking cartel. Always question politicians who are promoting carbon taxes to fund their trillionaire lifestyles.

Most recently the government has been found lying and making up data, now being spun as mistakes, when reporting that 2008 was one of the warmest in recorded history. Now that 2009 and 2010 are being reported as some of the coldest several scientists are now coming out and reporting things like "Big money is behind pushing the global warming propaganda."

Most people with common sense have been telling us that all along.

So former Vice President Al Gore COULD be looking for a new job and proponents for earlier Springs would fully support him for the position. As for us – we’ll stick with Guido – I mean Phil! 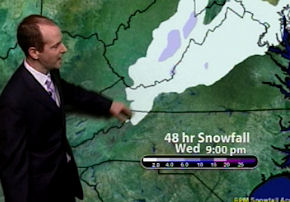 <Snow measured in FEET in our forecast for this weekend?

Our buddy Brad Panovich has updated his Skier’s Forecast video for this morning. He typically does his first one of the week on Monday AM, but who could blame any professional weatherman for wanting to wait until this Groundhog Day morning to release his first weather video of the week?
Brad’s forecast video is titled "Cold & Stormy February" and he leads off with a comment that you guys will cheer about, "Get ready for a GREAT end to the ski season!"

Okay, we’re not halfway through the season yet and then after February there IS still March and some of April, but we’ll take ’em one month at a time and I think we’d all like a "cold and stormy" February as long as most of those storms are of the fully-developed SNOW variety!

After today’s "little winter storm" we’re awaiting the "bigger storm" that looks to still be setting up for later in the week as we get closer to the weekend. This morning’s freezing rain and mix in the North Carolina mountains is mostly an all snow event further north into West Virginia. From what Brad is saying after we get through Tuesday’s mixed event across the region, we should see some snow at all of the Southeast and Mid Atlantic ski areas for Wednesday. Brad’s forecasting light accummulations for the North Carolina and Virginia mountains with 3-6" of snow for Snowshoe, Canaan, Timberline and into Wisp Resort in Maryland for today through Wednesday.

Brad says the primary storm track will be down to the south which is typical of El Niño. He says there’s an "Omega Block" in place out in the Atlantic which serves to block the approaching systems in and that will allow the cold air to push down and into the Southeast and Mid Atlantic. The added ingredient of "waves of low pressure" will take place and EACH could produce a pretty significant snow storm. One of those will be heading our way this weekend and Brad calls the approaching Friday-Saturday storm a "potentially BIG SNOW MAKER" as he says we may be measuring snow in FEET – not inches. Stay tuned for his update to come later in the week.

I have asked a ski and snow loving member of our team to take over the reins of writing the posts for SkiSoutheast.com for a bit. Will is a 30 year old, snow loving friend who hails from Kings Mountain, North Carolina. Will joined our staff this past summer and he also works weekends as ski instructor and supervisor at Sugar Mountain Resort. Will has been on the snow more than anyone else I know personally and we think he’ll do a great job of providing another take on the ski industry of the Southeast and Mid Atlantic.

He assumed the duties of posting all of the snow reports and snow totals via our online Snow Report as of this morning, and he is probably posting some content of his own this morning. Look for that input.

I’m devoting a bit more time to my "real job" beginning today and I will be working behind the scenes to get the SkiNC and SkiSoutheast SUMMIT promotions going full blast.

Yesterday I mentioned the Groundhog Day reference to the idea that we’ve been reliving each day lately like they did in the movie. I’m beginning to really wonder.  Again this morning – at precisely 6am – the phone rang as it has done for way too many mornings since mid December. The voice on the other end of the phone is Watauga County schools superintendent Marty Hemric and he says – nearly everyday – "Good morning students and parents. This is Marty Henric of Watauga Country Schools. School will be out for today due to ice (or snow or whatever the wintry weather of the day is)."

Yes, they are out again today. They were out Monday. They’ll probably be out again Thursday and/oir Friday. If we get the dumping Brad is forecasting they’ll be out next Monday! We;re stuck in time I tell you!

We’re on day 66 and there are 71 more days of opportunities to enjoy the snow for the 2009-2010 ski and snowboarding season!

That’s it for today. Go enjoy the snow! Check out the Snow Report at
https://www.skisoutheast.com/skireports.php  and please send us your favorite ski photos, ski videos, trip reports and comments to [email protected]