I feel like I owe Snowshoe top billing today because even though for weeks I’ve been promoting the fact that they were staying open through today…on Sunday I mentioned that yesterday was their last day of skiing and riding.

Tami Jenkins of Charleston, WV wrote us on Easter Sunday saying, "I love your website because you guys nearly always provide us the straight dope on what’s happening at all the ski slopes. Admittedly Monday is a weird day to close on, however, this morning (Sunday) you mentioned that today was Snowshoe and Wisp’s last day of skiing for the season. The reason I am going to Snowshoe on Monday is because I read it on your website last week that they will be open on Monday. I and my boyfriend are off work Easter Monday and we’ll be there and hopefully get you some photos. I misssed the summit this year but hope to make it next year!"

I thought she was wrong. I looked at Sunday morning’s post and she’s right – I was wrong. Confused? Don’t be! Snowshoe will ski and ride TODAY, Monday, April 5th for one more day on 19 trails.

It’s funny when they first announced the Monday closing I goofed it on the site and then corrected it and almost screwed it up several times when updating the different ski area’s operating schedules – but continually caught myself – only to mess it up yesterday.

Laura Parquette sent this announcement to all media peeps this morning bright and early:

SNOWSHOE MOUNTAIN CLOSES FOR THE SEASON AFTER 122 DAYS OF SKIING AND RIDING AND ALMOST 230” OF NATURAL SNOW!

Snowshoe, W.V.— After 122 days of skiing and riding, including some of the most epic powder days ever experienced in the Southeast, the time has come to bid farewell to the 2009-2010 snow season. The season got off to a late start, as Mother Nature decided to let fall stick around into early December, but once the season was under way at times it seemed the snow would never stop! From snow-pocalypse to snow-magedon, big storm after big storm rolled through the WV mountains, ultimately dropping 229" of natural snow on Snowshoe. February alone was one of the snowiest months on record at the resort, and day after day the powder was nearly waist deep, causing people to question whether WV had been moved with Utah.

But just when it seemed the snow was never going to melt, March arrived and spring was in the air. With plenty of sunshine and bluebird days, Snowshoe continued to offer some fantastic conditions. And with base depths of more than 5 feet, the mountain announced intentions to extend the season into April. As other resorts closed their doors, Snowshoe continued to ski and ride on the region’s most open terrain. But as April began, it was clear the end was near. This last week of the season we’ve seen temperatures higher than most summer days on the mountain and the snow began to suffer because of it. Crowds gathered for those final turns of the season, and Last Hurrah festivities really did feel like a beach party, with temperatures in the mid-70s and plenty of t-shirts and bathing suits showing up on the slopes.

And today we’ll finally call it a season. Snowshoe wants to thank everyone who has joined us on the mountain this year; to those of you who brazed blizzard conditions and enjoyed the waist-deep powder, to those of you who lathered on the sunscreen and enjoyed amazing spring conditions these last few weeks. It had been an incredible 122 days and we can’t wait to do it again next year! Don’t forget to check out all of Snowshoe’s exciting summer events and activities, and come back and join us next season! 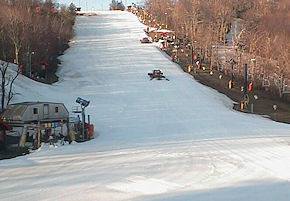 Appalachian Ski Mountain remains 100%open with all 11 slopes and trails in terrific shape. All three terrain parks are open as well for day sessions only. I heard from several local students who plan to ride at App today.

Cataloochee Ski Area is CLOSED for this week and plans to reopen on Saturday for two more days of skiing and snowboarding fun.

Wisp Resort DID, in fact, call it quits for the ski and snowboarding season after Sunday sessions.

"Snowpocalypse" and "Snowmageddon" – Was it all SNOVERKILL? (I think it was a bunch of stuffy guys in bad moods. Probably jealous!)

Laura’s Snowshoe post today reminded me of a followup story that I had intended to post. I’d written it and never got around to it. It WAS a snowy winter!

Back during the midst of the heaviest snows of this past winter, several  meteorologists including Brad Panovich included the terms "Snowpocalypse" and "Snowmageddon" as descriptors for the massive snow storms that dumped heavy snow across the Southeast, Mid Atlantic and into the Northeast.

Weather peeps from all over the country including Accuweather used creative descriptors to label the storms. One quick moving entrepreneur even bought the domain name "Snowmageddon" and was selling snow-cleanup machinery on his site. The domain name is now for sale.

The National Weather Service had enough of it and said all of the misuse of storm terms was "SNOVERKILL". Okay, actually they didn’t say that – I did…but what they DID say was pretty straightforward. Right after Accuweather warned of an impending snowstorm as a "Snowicane" the National Weather Service warned that the approaching snowstorm had not even fully formed at that point and that the term "snowicane" foreshadowed impending wind-and-snow doom that was "almost inciting the public, inciting panic."

National Weather Service meteorologist Craig Evanego said the federal forecasters were taking a more measured approach. His weather service colleague, meteorologist Roy Miller in Mount Holly, N.J., put it bluntly to The Morning Call newspaper in Allentown, Pa. "It’s not responsible to be putting out things like this," he said.

The newspaper called the brouhaha a "meteorologist smackdown."

Richard Grumm, the government service’s chief science and operations officer in State College, said science and "getting people’s attention and entertainment" each serve a purpose.

"Scientifically, I have my own opinion of what a hurricane is," he added. "The word, ‘snowicane’ — I have a glossary of meteorology, it doesn’t exist."

Actually Accuweather’s meteorologists weren’t the only weather gurus using terms like that but Evan Myers, chief operations officer of AccuWeather, defended the choice of words but said his firm wasn’t trying to panic anyone.

"I guess you can say that we stuck our necks out on this storm. Some people thought we were crazy, we were nuts, talking about the storm from this perspective," Myers said Friday from the floor of AccuWeather’s high-tech operations center in State College.

"The storm performed as advertised," Myers said, noting, among other things, the coastal flooding from Maine to eastern Long Island and heavy snows in some areas.

Right after the storm, and after all of the NWS fuss AccuWeather’s Web site took up the "snowicane" defense: "Our concern was that the storm might be taken too lightly by the public if we stuck to the norm of calling the system a nor’easter, snowstorm, or even a blizzard."

What I find funny about the whole thing was the fact that evidently the National Weather Service and The Weather Channel peeps have not watched much NATIONAL TELEVISION. Over the last few decades weather peeps on many local, regional and national network television broadcasts have been more "weather entertainers" than newspersons.

I’m pretty certain that Mr. Grumm could check in his glossary of meteorology and not find terms like "frog stranglers", "it’s raining cats and dogs", or "The Devil’s beating his wife"…and Lord knows tons of other goofy weather terms that have ALL been used for decades on radio, television and newspaper forecasts and content.

When I first read about the National Weather Service’s admonishing of Accuweather I thought it was a bunch of weather gurus probably upset that the economy was tightning their budgets. Stuffy guys in bad moods are never fun to be around.

We’re on day 130 and there are 7 more days of opportunities to enjoy the snow for the 2009-2010 ski and snowboarding season!

Go enjoy the snow! Check out the Snow Report at https://www.skisoutheast.com/skireports.php  and please send us your favorite ski photos, ski videos, trip reports and comments to
[email protected]