Before I get into my late season blab this morning I do want to say that our hearts go out to all of the families, friends and people of West Virginia due to the explosion that killed 25 miners in Montcoal, WV on Monday. Officials are saying that this is the worst U.S. mining disaster in a quarter-century. Four miners remain unaccounted for from Monday’s explosion and rescue crews were pulled for safety reasons because of dangerous levels methane gas and carbon dioxide according to Fox News reports that I was watching this morning.

Our prayers go out to all connected to this disaster.

As is usually the case, the southeastern region’s ski and snowboarding season begins in the state of North Carolina and the 2009-2010 will come to end there as well. After Snowshoe Mountain ended their season on Monday afternoon that left Appalachian Ski Mountain in Blowing Rock, North Carolina as the lone resort still operating of the sixteen ski areas within our coverage area. App is operating daily this week and my daughter Carrigan joined several others to ski and ride there on Monday. Local students had Easter Monday off as the rest of their Spring break was taken away due to all of the missed school days during one of the snowiest winters on record. Schools off the mountain are on Spring Break and according to several reports there was a good crowd riding the soft snow at Appalachian on Monday.

The snow report was simple this morning. All I did was take a second and toggle Snowshoe as closed for the season and updated App’s report to reflect 2" less snow base on the mountain – and one less slope open. Hard Core was pulled from App’s offerings for Tuesday, April 6th. They now have a base of 20" to more than FOUR FEET of snow still on the 10 of 11 trails and all three terrain parks.

Cataloochee Ski Area in Maggie Valley will reopen for Saturday and Sunday joining Appalachian for one more weekend of fun. Sugar Mountain Resort in Sugar Mountain, North Carolina opened first this season (by three hours) on November 27th after milder than normal weather delayed the start of the season. Cataloochee Ski Area open at 1pm on the same day and Cataloochee and App will end the southeast and mid Atlantic ski season this Sunday after their day session. 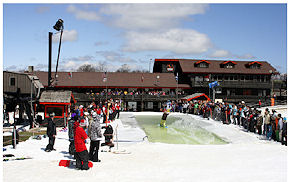 I was told late yesterday that I HAD to go and play at Appalachian this Sunday for their closing day of fun. Barring any last second adjustments to my schedule I’ll be there.

Appalachian’s classic end of the winter celebration is taking place later than ever before, on Saturday, April 10 & Sunday, April 11, 2010. A full weekend of crazy events you won’t see any other time of the year, with lots of snow, sun, and skin.

Here’s the latest schedule of activities and fun:

Laura Parquette posted this note this morning, "Thank you for a great season! Snowshoe Mountain Resort is closed for the 2009-2010 winter season. Be sure to check out all of our exciting summer events and activities. Snowshoe is the perfect summer escape–Come Play in Our Backyard! And don’t forget, Snowshoe Mountain Season Passes for the 2010-2011 winter season are now available. Purchase early for the best available price! Thank you for another great season and we hope to see you on the mountain again soon! Call 877-441-4386 for summer lodging deals and packages."

We’re on day 131 and there are 6 more days of opportunities to enjoy the snow for the 2009-2010 ski and snowboarding season!

Go enjoy the snow! Check out the Snow Report at https://www.skisoutheast.com/skireports.php  and please send us your favorite ski photos, ski videos, trip reports and comments to
[email protected]