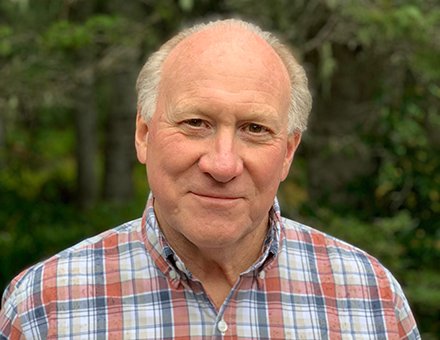 Every week after I write my column, I turn it over to my wife Angie for her to edit my mistakes and make me look good.  That in itself can be one tough task.  Many a time, her along with me do not know what the week’s topic is going to be until I start striking my laptop’s keys.  This week’s topic unfortunately came to me Saturday afternoon after receiving a sad but expected text.

After giving it everything he had, Jim Haas, a ski industry veteran, passed away after losing his battle with COVID-19, on Saturday.  Jim’s final job in the ski industry was as General Manager of Big Snow American Dream, an indoor ski resort in New Jersey.  Jim was 70 years old.

The fact that I knew exactly what Jim’s age is, is because when he celebrated his 50th birthday, we sang happy birthday to him at my wedding reception after marrying my favorite editor.  That’s a memory that will always be with me.

When I started working for Snowshoe Mountain in 1990, the Director of Risk Management was Jim Haas, a former paramedic and ski patroller.  I was a 33 year-old former news and sports reporter and basically full of himself.  I knew how to get the word out to the media about the largest ski resort in the southeast but, well I didn’t know I had to behave myself while doing it.  Sometimes I just sit back in amazement how I got out of the 80’s.  Seriously!

Without going into a lot of details about my transgression, one day Jim took the opportunity of the two of us being on the same chair lift to explain the facts of life to a ski industry rookie.  What he said to me isn’t important other than to me and believe me when I say it has stuck with me the rest of my career in this exciting industry.

From that point forward, Jim not only became one of my closest friends in the industry, but he also became my mentor whether he liked it or not.  In a way I also I believe, and he told me this was the case, that I helped him understand that during a time of crisis, how you communicate that crisis to the public was critical.  I guess the term used often these days is transparency.  It looks like the Jim and Joe team was ahead of the times in this aspect.

You see there are times in the ski industry that the news of the day isn’t just about beautiful, groomed slopes and bluebird skies.  I am here to tell you that there are inside curveballs that will be tossed at you and you just have to be prepared when that happens.

As Jim was moving ahead in the Risk Management side of the ski industry and realizing he had a team player by his side, he mentioned to me during another lift ride that it would probably be good for the resort to have a comprehensive crisis management plan, with one of the main components being how the public relations side of the crisis was going to be handled.  Jim was always concerned for the resort’s image and knew how any crisis was being perceived in the public was important.  Well, during that lift ride he proceeded to give me that my task for the plan.  Long story short, through Jim’s guidance, Snowshoe came up with one of the first, if not the first fully detailed crisis management plan for any resort in the southeast.  It was used as a model by ski industry insurance companies and Jim was asked many times to speak at industry conferences, allowing other resorts to learn from his proactive thinking.

As I look back now, I realize Jim understood the need to communicate with others in their comfort zones.  For me that was and still is on a chairlift.  My goodness we got a lot of work accomplished during those rides.  Besides the important conversations we had on the chairs, we also were able to get plenty of what I have always called “product evaluation” in during our time on the slopes.  This is where I learned first-hand how the ski industry could be operated in a safe fashion.

When Jim skied, he was taking in everything on the slopes.  He would be looking at how hazards were marked or how the lift line corrals were set up for skiers and snowboarders on any given day, always taking safety into consideration first.  No short cuts for him.

Where I saw Jim shine the most was when a death occurred on the slopes.  From the moment something of that nature took place, you knew that Jim was in charge of handling all aspects of the situation in a tremulously professional fashion.  First taking care of the family involved and then making sure that the patrollers that handled the accident were also taken care of.

No stone was left unturned and that included the public relations side of the incident.  He would have me meet with him and we would come up with a statement that was released to the public, which in turn, kept the guessing down and got the facts out that were correct.  Jim thought it was not only important to inform the public, but also bring all of the resort’s employees up to speed on the situation.  Falsehoods during a time like this just isn’t a good thing and Jim knew that.

I don’t think there is a day that goes by that I don’t use something in my trade that I didn’t learn from Jim.  I am going to sincerely miss Jim, my mentor, but most importantly my friend.  Rest in peace, Jim.  I miss seeing you on the industry Zoom calls already.

That’s it for this week, thanks for joining me. Just remember whether it be cold or whether it be warm, we will weather the weather, whatever the weather will be.  The season has been challenging but fun so far and it is going to be a lot more fun the rest of the way.