Roller Coaster Weather is Expected This Time of Year 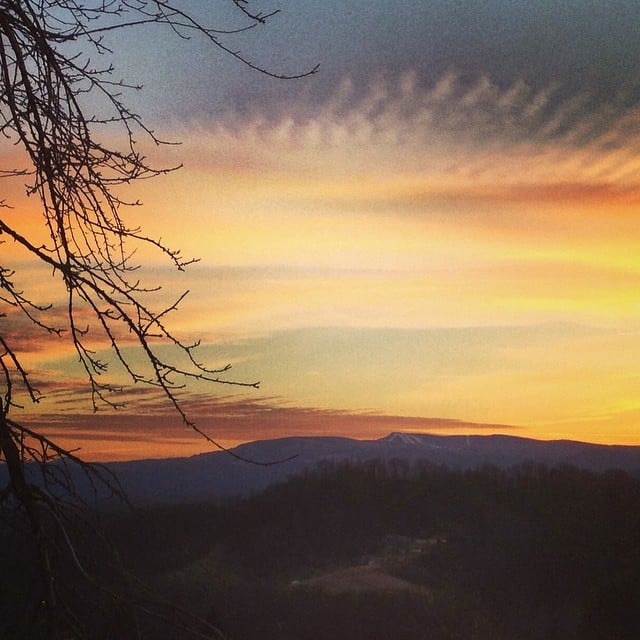 We’re in the midst of quite an interesting week of weather to start the month.  As Ray Russell from Ray’s Weather in Boone, NC says, “….you know it’s March when you go from highs in the 60s one day to snow showers the next”.  We’re going to see quite the roller coaster this week in terms of temperatures and conditions.  Rain, freezing rain, and snow are all in the forecast for the next few days.

Temperatures this morning are quite varied across the region.  It’s 19 degrees up in Wisp on the northern end of the region and 53 degrees down in Ober Gatlinburg on the extreme southern end.  That’s quite a range!  Looking at the radar and cams, West Virginia is dealing with a nasty wintry mix this AM.  Blegh.

Yesterday down here in Charlotte was crazy.  The temperature got to near 70 degrees.  It was a full on spring preview.  I went out for my jog around Davidson after work in shorts and a t-shirt and man oh man did it feel good.  I won’t lie, I was enjoying it.  After being in the frigid cold up in West Virginia all weekend it did feel rather nice.  Days like yesterday are precisely what the managers of the ski areas have to combat in March though.  While it was pretty warm off the mountain, I don’t think any of the resorts got out of the 40’s.  I’d imagine yesterday was actually a pretty fun day on the slopes.

However, once it gets warmer down in the lower elevations people’s mindset naturally changes from winter to spring.  I’d be lying if I said the warmer weather didn’t have me thinking of getting my jet ski back and cruising around Lake Norman.  I work for a skiing and snowboarding website and am addicted to snow, so if I’m thinking about that can you imagine what others are thinking?  Most people who aren’t in the mountains don’t realize just how much snow there is on the trails and how much cooler it is several thousand feet up.  My grandma always thinks I’m crazy when I tell her I’m going snowboarding in late March.  Her response every year, “Do they have any snow?!”.  Yes grandma, they have lots of it.  That’s especially the case this year.

Thankfully, winter is not over yet and makes a return in a few days.  In between now and then we have some freezing rain/rain to deal with today and all rain tomorrow unfortunately.  I know I said this yesterday, but when is the last time it actually RAIN RAINED at the resorts?  It’s been a while I think.  We’ve had some freezing rain I think here and there, but I feel like we haven’t had to deal with a warm rain in a decent amount of time.  Maybe I have a short memory.

Once we get through today and tomorrow, snow returns on Wednesday night and Thursday.  It looks like everyone should see at least a little bit of natural snow while with West Virginia seeing the brunt of this event.  Not fair!  There’s still some uncertainty about totals right now so I’ll wait until tomorrow to post the forecasts and what not on here.

With it being late season, there are several season pass sales going on right now.  The end of the season is always the best chance to go ahead and get your pass for next year as many resorts discount them heavily.  The same goes for this year.  Snowshoe already had their Ridiculous Pass Sale that ended last week and Cataloochee had their one day Big Pass Sale, but there are still a few others going on.

Canaan Valley is currently having their “Outrageous Totally Incredible Amazing Crazy Wonderful Pass” sale.  Say that three times fast.  They’re offering 2015/2016 unlimited season passes for only $199, which is a heck of a deal for a pass to what many of the original messageboard members say is their favorite ski area in the region.  This offer is good through April 15th and you can purchase it in person at the resort or by calling 304-866-4121 ext. 2612.  Just a note, this deal will not get you free skiing for the rest of this season.  However, they are also offering a March Madness Ski Pass which will get you unlimited skiing and snowboarding for the rest of this year.  That pass is only $75, which is also a good deal and will be paid off in 2 visits.

I know I mentioned this one yesterday, but I’ll do it again because it too is a good deal.  Ober Gatlinburg is selling 2015/2016 unlimited season passes for just $249, beginning on March 6th anyways.  This deal will allow you to ski and ride for the rest of this season for free.  From their site…

Finally, Appalachian Ski Mountain is also currently selling a season pass for next year.  I believe they’ve actually been doing this for a few weeks now.  Like Ober, their deal will get you free skiing for the rest of this season, which they’ve already announced will run through April 5th.  From their site…

Purchase your 2015-16 Season Membership now, and ski the rest of this season for FREE!

With a season membership, you can ski all winter long for the price of about 8 ski tickets. Drop in anytime, when you only have the time to ski for an hour or two, and take advantage of your chance to ski without worrying about the cost of an unused ticket. Membership benefits include free parking and a gated members’ parking area closest to the lodge.

You can find out more information about this deal by CLICKING HERE.

That’s it for now.  Enjoy your Tuesday!