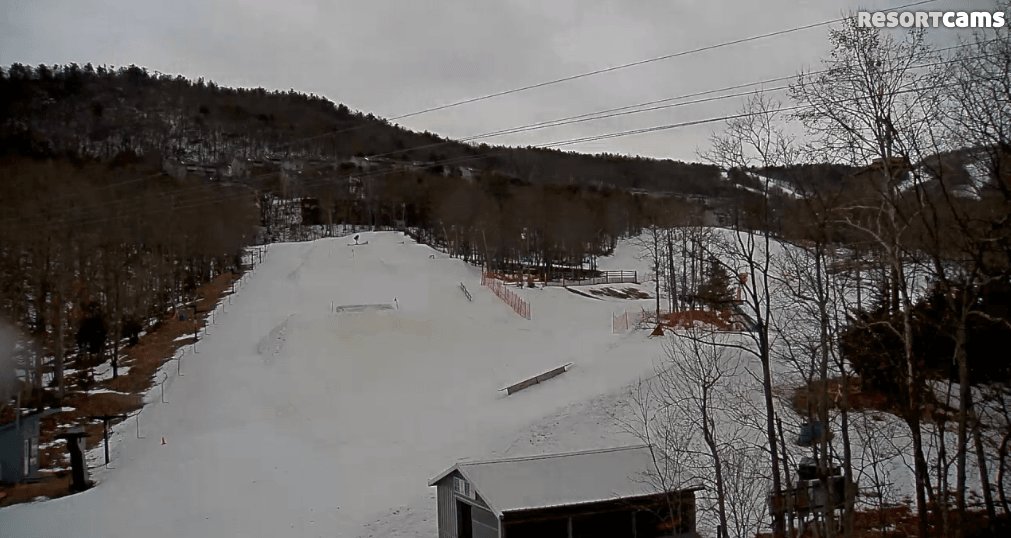 This week’s roller coaster weather continues today with the up portion of our ride.  Monday was fairly mild, yesterday was colder, and today it’s back to mild temperatures.  Really mild actually.  Temperatures at the North Carolina ski areas are already in the upper 40’s and 50’s this morning.  There was actually a 61 degree reading from Sapphire at 8:15.  Mike emailed me and said it’s 60 there at the office in Foscoe.  He said it’s an odd feeling to be driving through his neighborhood and down Highway 105 and see piles of snow everywhere while he’s wearing a t-shirt and it feels like Spring.

It’s not quite as warm the further north you go.  The Virginia and West Virginia resorts are generally in the 40’s, but there are a few spots that are still holding on to temperatures in the 30’s.  Those will rise today though.

As is expected with a couple days of milder weather this week, we’re seeing the good old “wet granular” phrase thrown out on a few of the snow reports.  This is probably the most accurate depiction of conditions today as the warmer temps and rain today will create some soft, slushy snow.  For the first time this year just about everyone is also showing a drop in base depths.  Some are only a few inches while a couple resorts are showing a 10-20 inch drop.  Regardless, it’s nice to see the honest reporting.  Back in February when it was in the 50’s for a couple days you were hard pressed to find anyone doing this.  I think Mike actually talked about this in an article.

Don’t get used to the warmer temperatures just yet.  A big change occurs tonight and tomorrow.  In fact, tomorrow is looking like a powder day for West Virginia and Virginia.  Yup, powder.   Here’s a summary for you…A front moves through tonight and temps will be 20-25 degrees colder tomorrow at the ski areas.  Most spots won’t get above freezing.  For example, the high today at Snowshoe is 42 and tomorrow it’s 18, falling throughout the day.

Snow accompanies the frontal passage….at least for the northern portion of the region anyways.  Check out some of the NWS forecasts below…

Unfortunately for the resorts here in North Carolina, it doesn’t look as snowy.  A “tremendous” warm nose (NWS used that term in the forecast discussion) will keep precip as freezing rain/sleet for longer.  However, a little bit of snow is possible at the tail end of the event tomorrow afternoon.

Here’s a map of the current NWS forecast for snow over the next 36 hours.

Like I said, tomorrow is going to be a legit powder day for some resorts.  It also is going to fluff up conditions for the weekend, which looks NICE.  I am pretty pumped to go riding on Saturday at either App or Beech.  It looks like a hoody day and plenty of blue skies!

This snow is also going to help a bunch of resorts easily get through until the end of the month.  Things are still looking good right now on the cams, but this will definitely help get them to the end.  Remember, for the most part nobody has made snow in several weeks now yet conditions are still superb.  We’re going to have a lot of places closing up shop for the season at 100% open, which doesn’t always happen.

This is kind of random, but if you’re at work today and want some entertainment, check out the webcast of the Burton US Open.  I know most of you reading this probably ski, but it’s still pretty cool to watch the pro boarders huck some triple corks.

That’s it for now.  Tomorrow morning should be exciting!

Previous Post
Roller Coaster Weather is Expected This Time of Year
Next Post
73° and Snow on the Ground! Crazy Weather in the Mountains! Click to Enlarge