History of The Homestead Resort 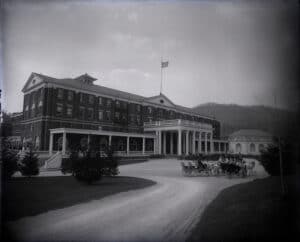 Since 1929, the Tower has been the trademark of The Omni Homestead Resort. This, however, was not the first view the guests would have seen. Our first inhabitants of the area were the Native Americans, who used the waters to “rejuvenate” themselves on their many excursions through the area.

Captain Thomas Bullitt, Charles and Andrew Lewis were part of the militia and surveyors during the French and Indian War. They were told of the many healing qualities of the waters in the area. In 1764, at the end of the war, Capt. Bullitt received Gold and Silver for his services and received a colonial land grant of 300 acres which contained seven natural mineral springs from Col. George Washington.

BUILT ON REJUVENATION
After receiving the land grant, Capt. Bullitt moved his militia company and their families to the area. Within two years, the land was cleared and an 18 room wooden hotel was completed. In 1766, The Homestead was opened and named in honor of the Homesteaders who built the resort and bathhouses. From 1764 to 1778, Col. Bullitt along with his family operated the resort. During the American Revolutionary War, Col. Bullitt died during battle and his family retained ownership of the resort until 1832.
In 1832, Dr. Thomas Goode and his family purchased the resort from the Bullitt family along with the Resort in Warm Springs and Healing Springs. He was a prominent physician and is responsible for the European style of many different spa therapies. Dr. Goode passed away in 1858 and upon his death, the family took over the ownership until the early 1880s.

M.E. INGALLS
M.E. Ingalls, a prominent lawyer from Cincinnati, Ohio came to the area in 1881, while doing research for the Chesapeake and Ohio Railroad Company. The railroad was looking to expand the lines into the area when Mr. Ingalls came upon the resort. For almost seven years, Mr. Ingalls, J. P. Morgan and many other investors came to an agreement to purchase The Homestead and build a spur into the Hot Springs area. Within the first year of ownership, the investors raised more than 1 million dollars to build a whole new hotel.

FIRE
On July 2, 1901, a fire, which started in the pastry shop, burned the entire resort. With the resort not being at full capacity, everyone was able to escape without any serious injury or loss of life. The staff was able to save the Spa, Casino, the cottages in Cottage Row and the Virginia Hotel.

REBUILDING
The day after the fire, Mr. Ingalls, Mr. Decatur Axtell, who was President of the resort, and the many investors met to discuss the resort’s future. With the smoke and embers still in the distance and insurance not available, they came to the conclusion to rebuild the resort. Within a year, March 10, 1902, the Great Hall was completed and The Homestead was back in business. Former guests of the resort were returning to the grand hotel they loved. Within two years, the West Wing was added.

EXPANSION
The Ingalls family acquired the resort in 1911. The East Wing was added in 1914, and M.E. Ingalls, Sr. passed away. In 1923, the Empire, Crystal, Garden rooms and Theatre were completed and in 1929, our tower was finished. The last major addition during the Ingalls family ownership was the Garden Wing in 1973.

RESTORATION
In 1993, Club Resorts, a part of ClubCorp, acquired The Homestead and began a total restoration. In 2001 The Homestead unveiled a new Grand Ballroom and outdoor pool, along with state-of-the-art snowmaking for the ski area and a new Shooting Club House and Pavilion.

OUTDOOR EXPANSION
KSL Resorts acquired management of The Homestead in 2006 and in 2012, “The Next Chapter” was launched with the addition of Allegheny Springs, a two-acre water area, Mini Cascades miniature golf course, Jefferson’s Restaurant and Bar and new Spa.

OMNI HOTELS & RESORTS
On July 1, 2013, the resort joined the Omni Hotels & Resorts family and is now known as The Omni Homestead Resort.