Reporting LIVE! (Not So Much…) 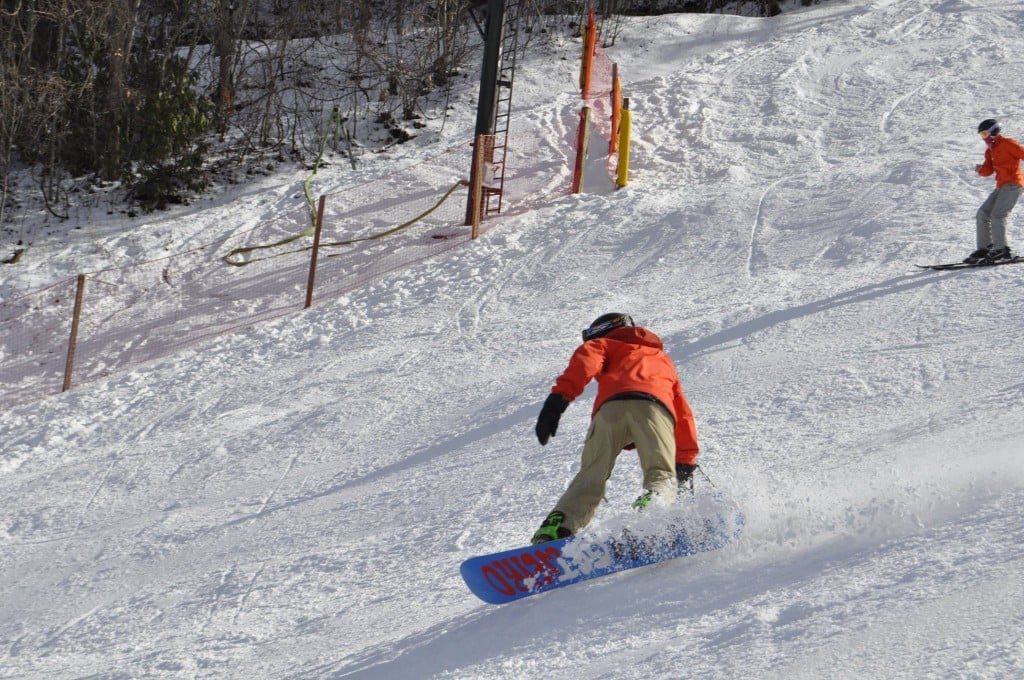 Before I get to today’s post. Check the SNOW REPORT for all of the slope openings and details of how much snow fell overnight and where.

“SkiSoutheasTV” was .75 for 3 on Saturday as we had plans for doing a LIVE broadcast at three different times and locations during the day yesterday. We heard from several that the morning broadcast was seen “okay” but that the feed died towards the end of the early broadcast. We were able to piggy back on the WIFI at Old Spruce in the Village for that one. The NOON broadcast…wasn’t …as The Boathouse’s Public WIFI wouldn’t let us connect. Later at 6pm at Hoots we were forewarned by one of the staff (Monica) that they didn’t even HAVE WIFI there.

Nevertheless, I have to say that we had an absolute BLAST all day long as the weather AND CONDITIONS could not have been much better. We definitely had great interaction with those who attended the event. We had a good crowd of 35 or so who came out for the early photo op and The Boathouse was awesome. Good brews, good hotdogs and good friends.

Hoots was quite awesome as Snowshoe President and COO, Frank DeBerry; Vice President of Marketing, David Dekema and Outdoor Adventure & Retail Group Manager, Mikey Valach all came by for a nice visit. We gave away tons of new hats, shirts, lift passes and stickers and the main attraction was being able to share stories and conversation with many of the long-time fans of skiing and snowboarding (and of the website).

We’ll have a bit more to share, including photos and video that were shot on Saturday evening. I’m going to try and get some video from David McCue as he was filming from the slopes as well. Today’s First Tracks will provide some more opportunities for video and we’ll try to get that posted later in the week.

However, I DO want to pass on a hearty “thank you” to Frank, David and their entire team at Snowshoe for making this 9th annual version of the SkiSoutheast Snowshoe Summit a great one. What was just an idea of Laura Parquette’s back in 2008 has turned into an annual fun fest. Obviously I also want to thank all who attended as it would be a private party of perhaps five or six without you guys. Thanks for your support.

I’ve heard from so many people over the years who have told me of how they’ve met some of their best friends via the website. Those stories are always heartwarming. Perhaps one of the more special ones comes from Austin and Candace Beeghly. Austin and Candace attended the 2010 Summit and during that event, he walked out on the balcony of their Highland House rental and Candace noticed that the words “Will you marry me?” were written on the snow. She said, “Oh look, someone is getting married!”

Austin got down on one knee (which is hard to do for a seven foot tall man) and responded with “It’s YOU” and then he asked her to marry him.

That was five years ago now and I spoke with Austin last week. He reported that they celebrated their 5th anniversary by visiting Snowshoe Mountain the week prior and that they are the proud parents of one child and “working on another”.

We’re Ready for a Higher-Tech Ski Reporting, but Everyone Else is Holding us down…

It’s kind of crazy but here at SkiSoutheast.com we are probably about one year ahead of the technology that will eventually allow us to broadcast LIVE from about anywhere, anytime.

Snowshoe has done an awesome job of “wiring the mountain” but unfortunately there ARE still “holes” in that coverage that prohibits us from being able to broadcast seamlessly. In about 1-2 years we’ll remind you guys that we were among the first to use WIFI to broadcast over the air (from the slopes), but right now…things are indeed spotty.

Today’s morning session will undoubtedly be awesome after another 2″ of snow fell overnight. First Tracks ALWAYS is. If you’ve ever been able to ski or ride on a Monday-Thursday, non-Holiday then you know the basic feeling of being able to enjoy the mountain almost all to yourself. Those of you who do a lot of night-sessions also know the feeling when you’re skiing down a trail and come to a stop midway down and look around to find nobody else in site. That is not fantastic for the ski resort that you happen to be at, but it is pretty sweet if you’ve paid for your lift ticket and find yourself making laps with no lift lines.

If you’re here with our SkiSoutheast Snowshoe Summit this weekend then you have one of those opportunities this morning as anyone in attendance this weekend can meet up at the top of the Soaring Eagle Lift at 8:15am or so as Snowshoe’s team is opening the mountain up exclusively for us to enjoy for plus or minus a half an hour.

The only thing that could have made that any better is the 2″ of fresh snow that fell overnight to cover that perfect corduroy that Snowshoe’s grooming team lays down every night and early morning as most of us are still sleeping.

So yours truly and perhaps a few dozen SkiSoutheaster’s will be putting the first carves on the fresh snow of Widow Maker, Camp 99, Sawmill or Log Flume.

Not long after some early First Tracks I’ll be heading to my home base of Boone and Banner Elk, North Carolina and according to every semi-pro and amatuer weather guru in the region – I COULD be riding the best snow left in the 2016-2016 ski and snowboarding season. Before I get to that let me share the fact that while it has been on of the craziest winters on record, I have enjoyed every moment of it.

It certainly began with a whimper with only a handful of ski days available in November and December. The Christmas-New Years week…wasn’t. For the most part things have been awesome since January 4th or so as winter provided some well-timed cold and snow that has made for pretty awesome conditions. We have had a few February thaws, followed by frigid periods, followed by thaws.

However, all in all the weekends have all been pretty sweet in terms of skier visit traffic at all of the ski areas. MLK Weekend and President’s Weekend were both very successful in that regard.

I can tell you that Snowshoe Mountain is in as good a shape as I have ever seen them in early March. The conditions today were nothing short of pristine, mid-season form. As I have already mentioned, with some overnight snow – Sunday will be sweet.

…and NOW we’re into March. Joe Stevens and a couple of resort ops have shared that several ski areas have ceased their snowmaking efforts as early as Monday of last week. It’s more important than ever to check our SNOW REPORT because we can tell you which resorts ARE still making snow and how quickly those huge snow bases begin to fall away.

For the most part we’re seeing 40″ +/- of base depths across the region and that is PLENTY enough snow to “take us home” for the last couple of weeks of this season.

WHEN WILL THE END COME???

No, this is not an apocalyptic story. I am alluding to the ski season. TYPICALLY resorts begin closing down ski and snowboarding ops mid-month. Some play on until the last weekend of March and some give it go to take us into early April. I have already heard some “noise” that a few resorts in each state (West Virginia, Virginia, North Carolina and Tennessee) may be calling in quits a little earlier than expected. Sapphire Valley in North Carolina will close for the season after TODAY’s sessions.

However more ski areas will do the same and some will pull the plug next weekend…and don’t be surprised if one or more of the resorts that typically prolong the season as long as it can…does the same and closes a bit early.

The reasons will be a combination of the weather and skier visits. I cannot tell you how many emails that I have received over the last two days either advising me or asking me about the weather forecast for the next two weeks. So let’s get to that.

One look at the forecast for one of the cold spots of the region (Snowshoe) reveals that we may not see another freezing temperature for AT LEAST 14 days and nights. Highs are forecasted to reach near or at 70° on Wednesday of this week. We’re seeing “showers” in the forecast for eight of the next 14 days. THAT, my friends will not only mess with the perfect conditions that are on display right now – it will also mess with the phyche of skiers and snowboarders who live in even milder and wetter regions.

We are seeing pretty much that same forecast with a notch milder temps for most of the other ski areas in the region. …and that will take us to March 19th. The way that this season has been – don’t be surprised if a resort or two or three decides to “cash it in”.

One reader asked me today (here at Snowshoe) if Snowshoe might decide to close earlier than usual. They commented on Snowshoe’s decision to keep Silvercreek open for night skiing right up to their last day of operation for this season. The truth is it is tempting to read into that the fact that Snowshoe could also be thinking about closing earlier. After all they typically close the Silvercreek side a little earlier and then focus all of their attention on the main trails on the Snowshoe side of the mountain.

Of course anything could happen, but I would still expect the traditional resorts that tend to prolong things as long as possible – to do so again this season. However things always come with that “weather permitting” tag and for at least the next 14 days, the weather is not going to be condusive for keeping things looking sweet.

There’s also no guarantee that the weather will even turn colder again after mid month. If things remain milder than normal past the 19th I would expect that we could see every ski area in the region looking at the 27th of the month as their closing date.