Rants, Raves, Answers to Your Questions and more nonsense!

We continue to add members to our staff in an attempt to better serve our readers – you guys from around the Southeast and Mid Atlantic and our ski resort management peeps. To that end, I’m happy to announce that I have some help posting morning snow reports, photos, videos and the like. That should free me up to work at my "real job" a bit more. However it will also free me up to comment a bit more specifically on newsworthy happenings.

We’re calling this section "Open Mike" (yes it is supposed to be a play on "Open Mic") because it should allow me to be a little more open to covering a wide range of topics that are related to the local ski industry.

Thanks to Sarah Davis, our new Communications Director, for taking over the primary task of doing the morning FirsTrax column and posting the photos of the day, etc. She’s also handling the communications to the many marketing and management people at the ski areas A-N-D she’s acting as a promotional liaison with the dozens of television meteorologists, newspaper writers, etc. We’ve tasked her with the job of making us look even better and getting out to even more people!

That frees yours truly up to rant and rave even more as I see fit. This could be fun!

We’ll cover more newsworthy subjects in the days to come now that more of the ski areas and resorts are opening. For today I figured I’d share your comments about the "complainers" who were saying that SkiSoutheast.com has gone soft. (Click here to read that story…)

You guys really came to our defense… Here are some of your comments:

Jason writes, "Hey Mike, Just ready your article about the complainers. I agree all they are is complainers. No one MADE them go skiing on a day when they knew snow would be being made. They won’t be complaining when there’s a good base and it’s 55 degrees on January 15 like all the weather guys are saying 🙂 Take heart, love your site and look forward to it each day."

Martin Pyle of Nashville wrote, "Don’t let 14 idiots get you down. You and the team at skinc/southeast are the best—PERIOD! We will be up for a WEEK Jan 2…leave some around for me! Besides, if the knuckleheads wanted to ski where there was no snowmaking, they SHOULD HAVE READ THE REPORTS and headed to Appy! Even from 300 miles away I knew where the snow blowers were off–why? YOU GUYS PROVIDED HONEST REPORTING! …(Bringing my almost 4 yo grandson up-0-got to start the next generation of TN skiers off right!)"

Albert writes, "It never ceases to amaze me at the folks who take every op to complain. I do not ski the way I used to but back in 1967 and forward a bunch of years the snowmaking technology, cost, equipment was nothing compared to today. Yes we complained about the blizzard and we were usually covered in the stuff after four or five runs but we never let it ruin our day. We were always thankful that they could make snow even if it meant we had to dodge some guns. I hate to be a buzz kill but I fear that the almanac and the weather guys may be correct. On another note, even though I dont ski a lot anymore I still read your daily report and it is always on target. Sometimes I may agree to disagree but you have a daily unbiased look at the happenings in our good ole mountain resorts. You keep writen and Ill keep readin. As for those complainers, I hope they figure it out one day. Nah Let em be miserable. Have a great week."

I HAD to share this email. We get a lot of questions related (and unrelated) to the ski industry around here, but this one just hit me funny. Check it out.

That’s it. Anyone care to take a shot at it? My answer would be – "probably".

Phillip from Georgia wrote, "hey Mike my name is Phillip and I live in Lawrenceville GA. We are going to take our annual pilgrimage up to Snowshoe Mts on December 19 and watching your site really gets me excited. My question for you is this, When a resort gets 10 inches, or more of snow as they claim, and I don’t think you are stretching it by any means why then do they not open more terrain? For example snowshoe has been making snow non stop for over a week and they are getting hammered with snow so why then will they only open with 14 trails? Also when they run the machines over the snow and pack it how much base does 10 inches of natural snow really make?"

First Phil, Snowshoe has been making snow for longer than the last week or two. Second, they got nearly two feet of snow. Third, they opened with 17 slopes and trails. Now to answer your question… (I could answer it…but I thought it would be better coming from a professional.)

Since the question was about Snowshoe specifically, I tried my buddy Laura Parquette and she wasn’t available. I tried Ed Galford, Snowshoe’s longtime snow goose. He wasn’t available. They were either out making snow or "sampling the merchandise".

I turned next to perhaps the biggest, baddest snowmaking system in the region – Wisp Resort. They’ve had two feet of snow and opened with 14 of 32 trails for today. Bob Yaste of Wisp answered the question this way:

"There are a couple of things involved there Mike. One is that even when we get two feet of snow like we just received over the last couple of days, there are wind-blown areas where we can still see the grass sticking through. Second, even if the snow fell straight down and there was no wind – when we get the kind of light powder snow like we’ve gotten now – that two feet might pack down to 4-5" once the groomers get ahold of it. Manmade snow is much more dense and packs as a base much better."

Lori Epp, Wisp’s Marketing Director came in to the office as Bob was finishing up (I had tried her first but she was busy handling Wisp’s Opening Day tasks this morning) and she added, "Hi Mike Doble. We kind of say that we don’t try to open with the most terrain – just the BEST terrain and that’s why we’ll go with our core trails first and get edge-to-edge coverage on those and then build on from there to get more trails open."

She added that Wisp’s would be celebrating their birthday bash this Sunday with $7 lift tickets and that always prompted a lot of beginners to hit the mountain so they always work to get good terrain open for them and then concentrate "out" from there.

We were talking "snow drifts" from all of this snowfall and I was telling her about the 4-5 foot drifts we have around here and she told me that during one of the biggest snowbombs of last season a fellow from there in Garrett County sent them a photo with his big Chevy Silverado Truck driven into a snowdrift that was TWELVE FEET DEEP! We sure have had some big snows in the last year and change.

WOW, check this out! 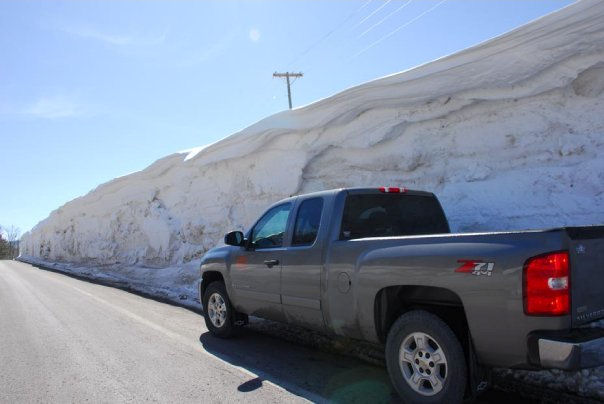 Lori and I were talking about Wisp’s popular Mountain Coaster which is basically a free-fall roller coaster that allows riders to control their own speeds dropping from the top of the mountain down to the base. She said that they were digging the coaster out today and should be ready to open it on Friday. She told me that during the heaviest snowfalls last season, the Mountain Coaster resembled a LUGE with walls of snow 4-5 feet high on both sides as you powered down the mountain!

I’ve ridden that thing more than a few times and it makes me squeal like a little girl. I know. I know. Wisp has opened their crazy, great snow tubing park earlier than ever before and that is worth a few squeals as well. I know that at least one snow tubing area promotes theirs as the longest, largest, best on the East Coast, etc, etc…but I’ve been to both and Wisp’s is better. Try it and you’ll agree. Also Winterplace’s, Massanutten’s and Snowshoe’s tubing parks are great as well (larger, better, etc).

While I’m raving – I just have to highly recommend a visit to Wisp Resort in Garrett County, Maryland. We’re getting more and more reader interest up that way, but a large percentage of our readers have not made that trip as yet. You really should. Wisp is one of those places that sticks with you. Visit it and we guarantee that you’ll go back again and again.

Even though we don’t cover the Pennsylvania resorts on the website, Connie Lawn just emailed me, "We hope to go to Liberty Resort Friday (the Pa. one). Whitetail and Roundtop are also opening. Yours, Connie and Charles."

(When you get emails from the longest tenured, independent White House news reporter, you try to share them.)

We’ve received more and more interest to branch out to the PA ski areas. Maybe we’ll do that next year.

That’s it for now. Check back for more rants, raves and commentaries. Email me YOUR comments, questions, photos or videos to [email protected] and I’ll post you up!