What a WILD ride this season has been! I was speaking with Canaan Valley Resort’s, Samantha Haverty on Friday and she summed up their season by saying:

“Mike, we started our season a week late and opened right before Christmas and it was 100% from then until March 8th. Then things slowed a bit, but we had a remarkable season.”

Canaan Valley’s new General Manager, Sam England echoed the same comments when I visited with him during the West Virginia Governor’s Cup races on March 6th and 7th.

We will post more details on this record-setting season for many ski areas on Sunday’s normal “ramble”, but suffice to say that this season’s traffic has been one for the record books despite a few of the ski area’s limiting lift pass sales.

Today’s Photo of the Day comes from Timberline Mountain. They had planned to be open today, however as you’ll see later in the report, they worked the mountain feverishly attempting to provide a quality snow day for today, but they made the decision not to open. The photo above includes “His and Her’s Groomers” and that is fitting as Tom Price, Director of Operations, and his wife are often seen in separate groomers on the mountain. (So cool, right?)

As of this writing, SEVEN ski resorts will offer skiing and snowboarding today and those are Appalachian Ski Mountain, Beech Mountain Resort, Cataloochee Ski Area, Massanutten Resort, Snowshoe Mountain Resort, Sugar Mountain Resort and Wisp Resort. The latter two will do it again on Sunday – unless they post a last minute change of heart.

The THEME for today is that resorts are closing with PLENTY of snow left on the slopes. However, recent rains and temperatures that have risen into the 70s for highs have taken a toll for many. Some ski areas had planned to close after Saturday’s sessions, and others had planned to ride one more day on Sunday. However, due to some projected heavy storms for Sunday – many have decided to make today the last day of fun on the slopes.

Here are the notables…

APPALACHIAN SKI MOUNTAIN – They are now closing at Midnight Saturday Night for the season. They will be 100% OPEN today for their last day of the 2020-2021 ski & snowboarding season.

Due to projected severe thunderstorms throughout the day on Sunday, March 28, Appalachian Ski Mtn will close for the 2020-21 season on Saturday, March 27 at Midnight. 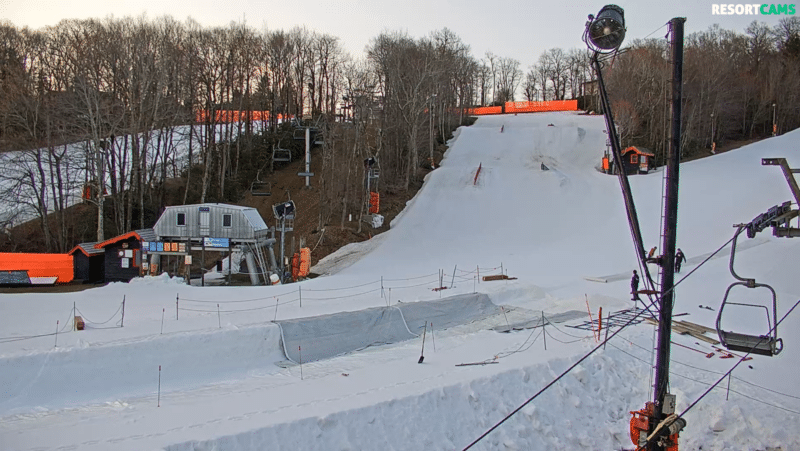 App was readying things for the Meltdown Games this morning. Click to Enlarge!

Meltdown Games events will be adjusted to fit into one single day, and will be held as follows:

Registration for all Meltdown Games events is FREE. Participants can sign up in the lodge the day of the event.

Any guests who have purchased a ticket for Sundays session may transfer their ticket to Saturday, or another day next season free of charge.

Editor’s note: The new LIVE CAMERA at APPALACHIAN SKI MOUNTAIN caught the App Crew hustling to place the pond skimming setup this morning. You can watch a LOT of the action LIVE RIGHT HERE – the camera will pan around and focus on the activities at various times.

BEECH MOUNTAIN RESORT – Beech had previously planned for today to be their closing day. They will operate with 7 slopes until 5pm. 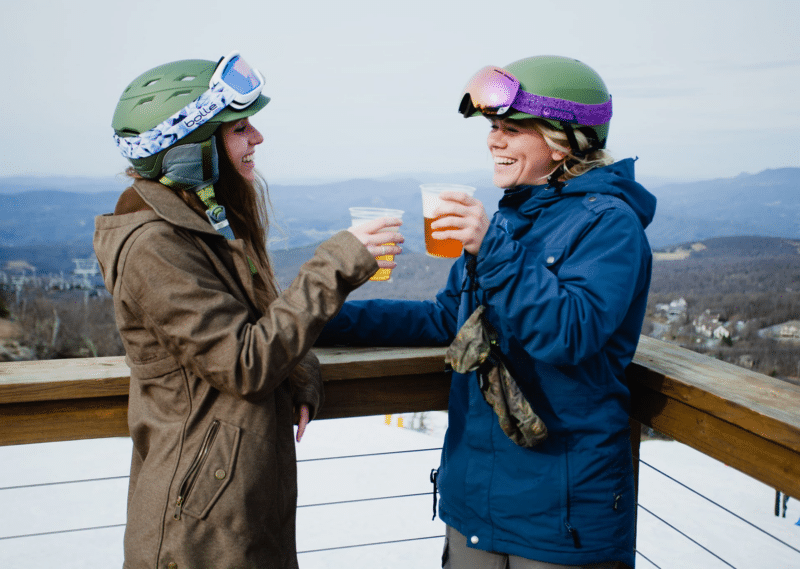 Nice photo compliments of Beech Mountain Resort from the 5506′ bar.

Cheers to another incredible season.

Closing day is scheduled for Saturday, March 27. The resort will operate from 9 a.m. to 5 p.m. All season pass holders and staff members are invited to a celebration at the cafeteria from 4 p.m. to 7 p.m. We’ll be serving complimentary barbecue, beer, and wine.

CATALOOCHEE SKI MOUNTAIN – Will call it quits after day sessions today (SATURDAY) and will operate with 13 slopes on a base of 25″-55″.

MASSANUTTEN RESORT – Open with an 18″ base and 6 slopes and 4 lanes of tubing for Saturday – which will be the last day of snow ops for the season.

Today will be the last day of skiing and riding for the 20-21 season. Slap on some sunscreen and enjoy the sunshine with highs in the mid 60’s. We’ll be skiing and riding on 6 trails wtih 4 lifts operating from 9:00am – 5:00pm. Thanks to all the employees and guests that made this season possible!

Late season rates are in effect. Snow Tubing will operate from 10 am – 4 pm Friday – Tue until the snow melts. No reservations required. 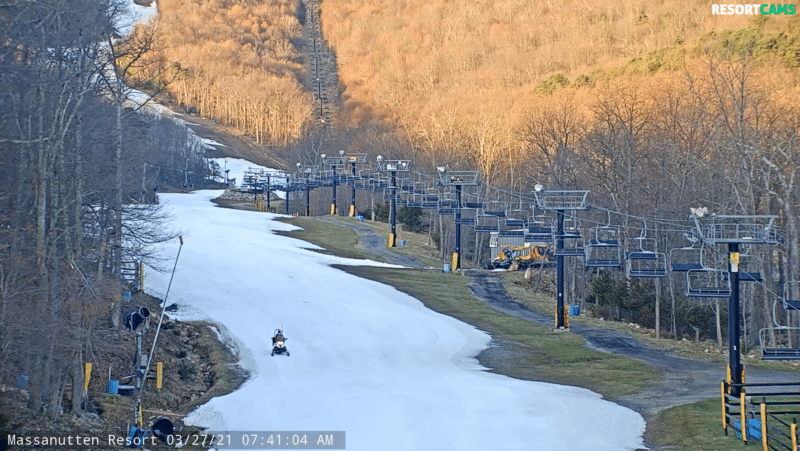 There’s plenty of snow at Massanutten Resort for their last day. Click to Enlarge!

SNOWSHOE MOUNTAIN RESORT – Saturday WILL be the last day of the season and Snowshoe will close things out with the most trails open in the region at 41 on a base of 35″. They posted:

The last Saturday of the season is officially upon us folks. Fortunately, it’s going to be a really good one here at the Shoe! Our mountain operations team has continued their amazing work and kept us up and running with the best spring skiing in the region. Sunshine, soft spring snow, and unlimited good times are all on the menu. Come on up and get your fill while you still can!

Editor’s Note: There’s nothing posted anywhere that we can find on their website or social media – but there’s word that Snowshoe is conducting a race between a mountain biker and snowboarder to see who can make it down Upper Shay’s Revenge the quickest. We also heard speculation that the mountain biker will have a dirt trail. My money is still on the snowboarder. Not sure if this is a real thing or not, but if it happens will post photos if we get them! 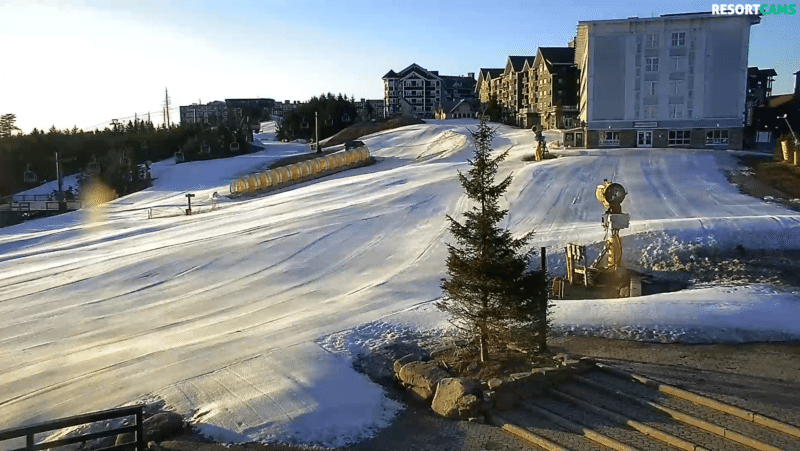 SUGAR MOUNTAIN RESORT – “We don’t care about no storm coming in…” (I made that up.) However, Sugar Mountain WILL be the only ski area open on Sunday and they will end their season after day sessions on Sunday. They will presumably do their annual “burning of the snow” then (we’re guessing rain or not). They will ride today with 11 slopes and trails and a reported 22″-66″ base.

TIMBERLINE MOUNTAIN – They are NOW Closed for the Season. They had planned to be open for one last day, today, however they posted:

Timberline Mountain will not open for skiing and snowboarding tomorrow Saturday, March 27. Unfortunately, due to heavier than expected rain, strong winds, and warmer temperatures, our snow base has rapidly deteriorated over the past few days. After several hours of attempting to salvage remaining terrain, our team of snow groomers has determined that it is in the best interest of the safety of our skiers and snowboarders to remain closed. While Timberline Mountain will not be open for skiing and snowboarding tomorrow, we invite you to join us for food and drinks from 11am to 7pm. We will be running food and drink specials at the Slippery Slope Bar & Grill. Join us to celebrate a fantastic first year at Timberline Mountain! 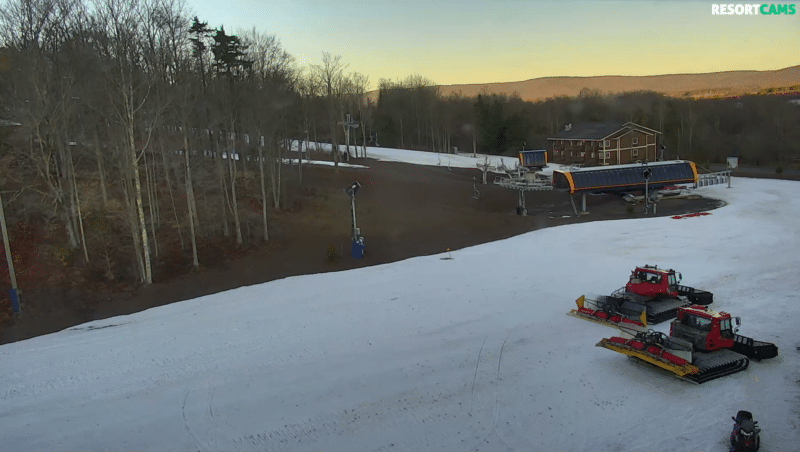 Here is the full shot of Timberline’s “His and Her’s” Groomers! Click to Enlarge!

WISP RESORT – They are open today with 5 slopes and it appears that they will be open on Sunday as well.

That’s it for me today. Check back on Sunday as we wrap up the season in a nice, neat bow. Joe Stevens will share his annual “Snowies” awards as he chooses various people to give “atta boys” to. I will also share a bit of a summary on some of the things that made this season pretty special. I’ll also put the wraps on the season’s snowfall totals. (That was as wild a ride as the season itself.)