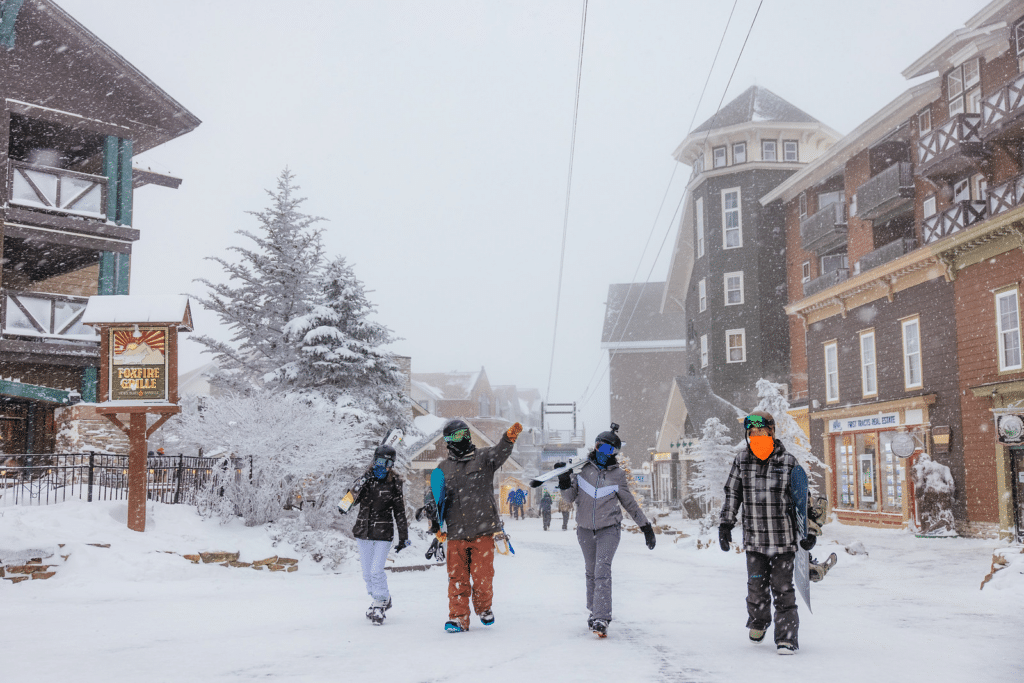 Right around this time on calendar, say about 37 years or so ago I was making some final plans to experience my first ski trip. My roommate at the time in Richmond, Virginia had convinced me to give the winter sport a try. So, purchasing some new Atomic skis, Marker Bindings, Lange boots and North Face outer gear (why in the world did we wear stretch ski pants) from Ski Reliance in Richmond, I was ready.

I am going to be honest with everyone, I had no idea whatsoever of what I was getting myself into and that I would still be involved some 37 years later in the fashion that I am currently.

Thinking back to the first time I put my boots on and tried to walk about my apartment – I just shake my head. Yes, I felt like Dr. Frankenstein’s monster. I just couldn’t imagine how on earth I was going to not injure something, while learning the sport. I remember thinking, “what in the heck have I gotten myself into now”.

Needless to say, we made the trip and on January 1, 1985, I made my first turns (sort of) on skis at Massanutten Ski Resort, just east of Harrisonburg, Virginia. I say sort of because during my first lesson I have no doubt that I was more horizontal, than vertical. I would love to catch up with the young instructor I had that day and let him know I actually learned how to have fun on snow in a safe fashion. I truly believe he had his doubts if I was going to make it out of day one and into day two.

Actually, day two went a whole lot better than day one and I figured out quickly that if I allowed gravity to be my friend, life on a pair of planks would be just fine. Luckily for me, Massanutten Ski Resort is an awesome place to learn to ski. The beginner terrain is perfect for those first ever turns. Oh, by the way, that situation continues today for first time skiers. Then as you move up to the intermediate terrain, the jump isn’t that great. The terrain at Massanutten allows you to get your ski legs under you without hurting your confidence.

I just can’t believe that was 37 years ago this week. Believe me when I say one of the best things I have ever done was to realize just how much fun one person can have sliding on snow. I now realize that one of the best decisions I ever made was to allow my roommate to talk me into going on my first ski trip. I have not looked back from that first day on the slopes.

It was five years after those first turns that I decided to leave my employment with the Virginia News Network and go into the ski industry on a full-time basis. Not long after that Snowshoe Mountain was purchased by Tokyo Development Corporation and the resort decided to have a full time Communications/Public Relations person on staff and when the position was offered to me, I couldn’t turn it down. I mean, ski for a living, heck yes. Under 35 and living at a resort 24/7, here we go.

I quickly found out that working at a ski resort was more than just fun and games. Yes, you work to play, but for those of you who don’t think it is tough in the trenches, you just don’t understand. From about the middle of November to the end of March, it is basically a 24 hour a day operation. The biggest reward to a long day in the office or on the hill are the smiles that greet you during your travels around the resort.

I was lucky to begin working at Snowshoe when it started to grow to basically where it is today. Early on, Silver Creek was purchased and new quad lifts and terrain were added. Then after Intrawest purchased Snowshoe in the mid-90’s, Snowshoe Village came online; Shavers Lake was expanded (increasing snowmaking capacity) and Shays Revenge was built.

Then in 1997 a strange thing occurred, I stopped skiing and started snowboarding. I decided I wanted to learn how to get down the mountain on one piece of equipment instead of two. There ‘s another story about what really happened, but I’ll save that for a rainy-day column down the road sometime.

For most of you that I have known for over 20 years (that includes the head dishwasher of this website, Mike Doble) have only seen me on a snowboard. That’s because after learning how to snowboard I never looked back.

If you want to get a good laugh sometime, Search on YouTube “Snowboard Santa” and there you will find me going end over end at Snowshoe while snowboarding as Santa Claus. That video clip aired on America’s Funniest Videos for at least 15 years during their holiday show. Hey everyone has their 15 seconds of fame and well that was mine.

Somewhere along the way I decided to step away from full time existence at a ski resort see what was on the other side. But it didn’t take long for me to realize that the ski industry flowed through my veins and well, since 2005 I have been the Executive Director of the West Virginia Ski Areas Association.

But also, that year from the first year I started writing this column, Snow News Is Good News for skisoutheast.com. The ride has been fun and as the saying goes “Times Flies When You Are Having Fun” and that continues to be true everyday I am in this industry.