Now I’m Beginning to be a Believer…

Over the last several days I’ve received a bunch of emails from some "gloomers and doomers" who were predicting early closures for some of our region’s ski areas. 2-3" of rain has fallen in the High Country area in the last four days with another 1.62" of rain falling on Monday according to our new Seven Devils weather station. On Monday we saw heavy rain, gusty winds, and even some hail. I was conducting an interview when the first rain drops began to fall. Big drops hit my window and that suddenly burst into a quick downpour that roared on the metal roofing of our office complex. Within about 45 seconds it was gone. Of course the heavy rains came back again and thus the nearly 2" of rain being reported at various locations in the region.

Canaan Valley’s David Lesher is reporting 1" of rain up there as well as a TRACE of snow overnight. Ditto that for Snowshoe, where temps dropped to 18° at the BASE of their mountain and 21° up top at 4848′. Temps were in the mid to upper 20s across much of the region, although borderline at Beech and Sugar for snowmaking.

None of the resorts in North Carolina made snow although the Town of Beech Mountain did! John Hoffman, the official spokesperson for Fred’s Mercantile up on Beech reported that the TOWN was making snow on their sledding hill. Does ANY OTHER TOWN in the region make snow? I don’t think so, but that would be an interesting thing to research. The Town of Beech Mountain offers a FREE sledding hill for visitors and kids have a great time on that thing. (Adults aren’t allowed anymore…except on one edge where one adult can ride down with younger kids.) John was announcing that the Town was offering a 50% discount on sledding for the remainder of the season. John’s a jokester, because my calculator tells me that 50% of ZERO is ZERO.

So the TOWN of Beech was the only entity making snow in North Carolina. Many, many, many people are emailing me that Beech will close after this weekend. Man I hope not. There’s enough snow up there to make it much longer but I kind of figured they’d go til at least March 13th… We’ll see I suppose. Beech often doesn’t make that call until the last moment. Some suspect that could come at any moment.

We reported on Monday that Wolf was already closed for at least this week. They have left the door ever so slightly cracked that they might reopen this Saturday for day skiing. Things look okay over there after the heavy rains of Monday. However we are seeing rain in the forecast now for this weekend (Friday, Saturday and Sunday) across all of Western North Carolina and that could trigger some early closure announcements.

Not so for Cataloochee. They are planning to ride through Sunday and then do their normal late season scheduling with 1pm-10pm skiing during the week. We also know that Appalachian Ski Mountain will go til March 27 with their Meltdown Games scheduled for that weekend. Of course that is "weather permitting".

Massanutten and Wintergreen Resorts in Virginia BOTH made snow overnight last night as did Snowshoe Mountain in West Virginia. Each of those resorts are promising to make snow whenever possible to keep the conditions optimal for skiers and riders right up to their closing dates.

THERE’S LOTS OF SNOW OUT THERE…REALLY THERE IS. Are YOU a Believer?

On Monday I posted some comments about how the conditions were really quite decent for Spring skiing with good, side-to-side coverage and no real bare areas or thin coverage areas to speak of. Several of you took that as if I was doing some "spinning" for the ski resorts. Here are a couple of emails that came to me last night:

"Come on. Really? With 70° and all this rain and you’re trying to tell us to keep coming cause theres lots of snow? Really. When did you guys go soft?"

"I thought your website was better back in the day when you used to trash the ski areas for lying about conditions. You really think we’re stupid? 60 dgegrees and all this rain and your still saying it’s good conditions? Really?"

…and then this morning I received this one:

"I was reading your site on Monday talking about good bases at the slopes and couldn’t believe it. However I’ve come to trust this site over the years and drove up to Sugar a few minutes ago. I will be one of the few snowboarding on some awesome looking snow this morning over here. A BIG THANKS for keeping us informed. I snapped this photo for you at 8am and cannot wait to get on the lift. I’ll be on chair one. Thanks guys." 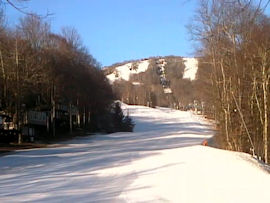 <Don’t know about you guys but this photo snapped and sent to us at 8am this morning looks darn sweet at Sugar Mountain this morning!

Such is our fate around SkiSoutheast-land. All we can do is educate and inform. If some of you choose not to believe us, you’re missing out. You guys can’t believe ALL of the snow reports that you may hear on the radio or find on other reporting services. There ARE some base depths being reported via some of the resorts in our region that have not changed since December 1st. One resort has reported a 24-48" base all season long and while it was impossible for that base not to fluctuate, we CAN tell you that they’ve probably kept two to four feet of base all season long. Obviously that is not the intent of reporting base depths, but we’ve kind of come to expect that from ski resorts not only here in our region – but across the nation.

That’s not to say that the numbers being reported aren’t accurate…and some resorts DO adjust their numbers daily. Resorts like Appalachian, Cataloochee, Beech, Sugar, Snowshoe and Winterplace all do a pretty good job of fluctuating their base reports with the conditions on a daily basis. Looking at those resorts you’ll see that after all of the rains that have fallen over the last few days we STILL SEE the following base numbers:

For you doubters out there…just bear a couple of things in mind. 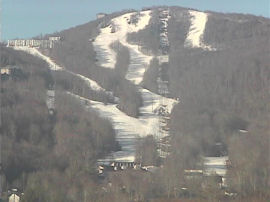 1. We have LIVE CAMERAS posted at several ski areas and you can SEE that there’s plenty of snow on the slopes.

2. Overnight temps have remained in the near to slightly below freezing levels so that helps to firm the surfaces up overnight for the groomers to do their thing.

ARE WE GOING AS SOFT as the Spring Snow?

I don’t think so. Of course I’m prejudiced, but let me share our take on reporting. While there are STILL some ski areas that have not exactly embraced technology and how the internet should perhaps be their primary promotional outreach – MOST HAVE. Some ski areas operate with blinders – nearly oblivious that there ARE websites like ours that are telling potential visitors what to expect before they head to the mountain. However MOST have grown to know not only about what we do, but other reporting services (national and regional) that have people like YOU GUYS posting trip reports much like some people post reviews of hotels and inns on Travelocity, etc. A decade ago, many ski areas still refrained from ever mentioning "thin coverage" or "bare spots". Not ALL, but some resorts were guilty of reporting slopes open that weren’t. 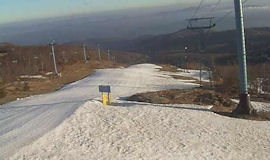 <Things are "narrowing a bit" atop Beech’s White Lightning trail, but there’s plenty to ride top to bottom!

Then along came the internet and websites like ours that shared information from a visitor’s perspective. Resorts slowly but surely came around to reporting natural snow more accurately; adjusting base depths more often and somewhat more accurately; and only rarely now do ski areas report some trails open that are not. You guys remember when we used to beat that dead horse called "over reporting of base depths and natural snow"? We actually posted an old cartoon that showed a six inch long ruler – marked off with twelve inches on it. That was because a couple of ski resorts used to overreport natural snowfall almost every single time it snowed. I am POSITIVE that they wouldn’t credit SkiSoutheast.com or SkiNC as the reason that they quit doing that, but I am 100% certain that is what happened. There’s no need to rehash old news because it serves no purpose, but the biggest "culprit" in that over-reporting has probably been THE MOST ACCURATE in reporting snowfall over the past few years.

Joe Steven’s weekly column this week alludes to one of his pet peeves – where ski shops in the region begin "End of Season Sales" right after Christmas. Joe has harped on that for a couple of years and this morning he shared that one of the ski shops that used to do that – is currently (RIGHT NOW) promoting that the conditions are really quite nice here on March 1st.

So in summary – maybe we’re not going soft. Maybe, just maybe more and more ski areas are getting it. For you "believers" out there – conditions ARE pretty darn nice for today and should be decent for a bit. We ARE getting some reports of some thin coverage areas beginning to appear at a couple resorts after daily traffic hits some trail merges. Overnight and early morning grooming is taking care of that as there’s a lot of snow to push around. Look for good, side-to-side coverage whereever you’re riding for today.

For you non-believers – you’re missing out. It’s time to hit the slopes before the snow DOES go away!