Not Quite the Totals We Were Hoping For, But Fun Nonetheless 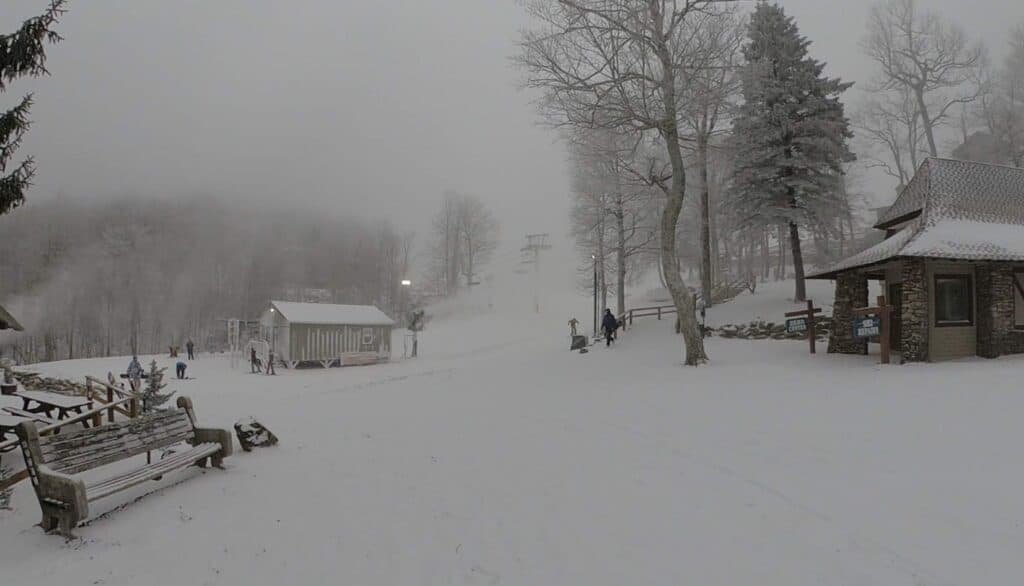 Yesterday didn’t pan out quite the way we were hoping for.  Natural snowfall totals didn’t stack up as high as some of us (cough me cough) were hoping for.  That said, it’s still been a productive 24 hours as man-made snow has supplemented whatever natural snow fell and things are looking mighty fine for many of the ski areas in the region.

With five independent shops located at Snowshoe, Canaan Valley, and Winterplace Resorts in West Virginia, and Wintergreen Resort in Virginia, Ski Barn has been providing quality ski and snowboard rentals to guests for 39 years.

Their diverse selection of ski and snowboard rental equipment (including helmets, skiboards, bibs, and jacket rentals) and their friendly staff will help you get on the mountain in no time. You’ll save time and money by stopping by one of their locations before getting to your destination. They also carry a wide selection of ski and snowboard clothing, equipment, and accessories from some of the top names in the business.

Bust is definitely not the right word to use for yesterday’s snow.  Technically, snowfall totals at the resorts fell in the ranges I mentioned yesterday where the forecast for the NC ski areas was 2-8″ and the WV ski area were looking at a little more.  However, the final amounts we are seeing this morning were on the lower end of that range and it feels like a bit of a letdown.  I have a degree in meteorology and I feel a little like a fool today as I fell victim to focusing solely on the upper end of the forecasted snowfall range.  Shame on me.  Don’t get me wrong, I’m pretty stoked this morning to go ride Beech after 4″ of natural snow fell in the past 24-36 hours, but I want more!  I think I need to stop paying attention to these 3-5 foot storm cycles that happen out west…

Again, those numbers are good to see but they were definitely lower than what many of us snow lovers were hoping for.  Much of the NC High Country below 4000 feet is barren this morning as the snow didn’t stick hardly at all.  Elsewhere, Steve Skarupa up at Snowshoe was mentioning the possibility of a foot yesterday morning on Facebook and that obviously didn’t pan out.  It appears this is one of those rare times where Northwest Flow underachieved.

All that said, it’s still beautiful out at the higher elevations here in western NC.  Mike and I were out and about in the Banner Elk/Beech Mountain yesterday and we made it up to Beech Mountain Resort yesterday to scope things out.  It was a winter wonderland in the village with a few inches of the white stuff covering the landscape.  Here’s what the Parkway looked like on the way up…

Cruising up a snowy Beech Mountain Parkway this afternoon.

…and we did a little mini video in the village just to show you what things looked like.

It was so nice to see a snowy covered village!

With so few resorts being open for skiing and snowboarding right now I’m finding it a little hard to find photos and videos from other resorts on social media.  Messageboard member brookbarrel posted this tasty clip though showing some creamy looking conditions at Snowshoe.

While the NW Flow might have underachieved, snowmaking hasn’t as the influx of colder temps has allowed the ski areas to complement that natural snow with some of the man-made kind.  It never ceases to amaze me how quickly things can turn around here in the Southeast and it’s happened again.  We’re seeing snowmaking at all of the NC ski areas this morning and all of the WV ones as well.  Ober Gatlinburg in Tennessee has the guns blazing as does Wisp Resort in Maryland.  It’s not quite as cold over in Virginia but Wintergreen Resort is making snow this morning, which MIGHT be the first time they’ve done so this season.  Don’t quote me on that though.

It looks like we will see a good amount of snowmaking to continue this week as well.  Now that the snow has come and gone, we’re going to clear things out over the next few days while staying on the cold-ish side.  Snowmaking chances between now and the weekend for the West Virginia resorts and Wisp in Maryland look very good, with around the clock snowmaking a real possibility for a few of those days.  Elsewhere, we should see the Virginia and NC ski areas be able to make snow during the overnight hours at least a few times over the next several nights.  I will say that if you are looking at skiing or riding this weekend, Saturday looks particularly nice.

We’re still in the infancy of the season, heck we’re still almost 3 weeks away from the official start of winter, but hopefully this is where the seasons begin to gain momentum.  There are five open ski areas in the region currently so there are some options for you.  More will be opening up soon enough.

I’m about to head out to Beech Mountain Resort to get some turns in and show you all how conditions are.  Follow us on social media as I’ll be posting some videos and photos throughout the day.  I’m pretty pumped to use my new GoPro camera and get some 360 video.  Maybe even a live broadcast?  Better not jinx myself.  Until next time.