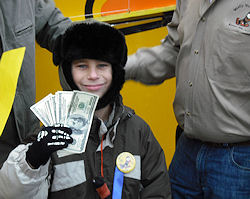 Nine year old Noah Jens, a 4th grader from Chapel Hill, NC and his woolly bear caterpillar competed in several heats of races along a 3-footstring on a stage at the festival. The heats went from 10 a.m. to 4p.m. on Saturday. To be the outright winner a worm has to win three races – his first qualifying heat race, then a quarterfinals of such and then the final race of the evening.

Noah won a $1,000 prize (plus $75 along the way in the other two races) and Wilbur proved himself the fittest worm to predict the severity of this winter for North Carolina’s High Country. 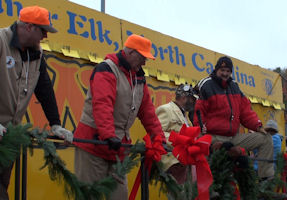 Festival Volunteers between races on Saturday>

For this winter in the High Country, Wilbur predicted relative cold temperatures and moderate snow, according to woolly worm readers Roy Krege and Tommy Burleson – along with festival founder Jim Morton.

Here’s the forecast according to "Wilbur" the winning worm: Remember that winter officially begins this year on December 21st.
Week One: December 21-27: Will start with cold temps and snow flurries

Week Five: January 18-24: Colder than normal temps but no mention of snow.

Week Six: January 25-31: Colder than normal temps but no mention of snow.

Week Seven: February 1-7: Colder than normal temps but no mention of snow.

Week Eight: February 8-14: Light flurries will fall and temps should be about normal.

Week Nine: February 15-21: Below-average temperatures will return but no mention of snow.

Week Ten: February 22-28: Colder than normal temps but no mention of snow.

Week Twelve: March 8-14: Flurries will close out the winter.

Wilbur’s forecast doesn’t quite stack up with Meteorologist Joe Bastardi of AccuWeather’s Winter Forecast that was released earlier last week. While the COLD temps mentioned throughout are promising for our region’s talented snowmaking crews, there’s only a moderate mention of snow that doesn’t support Bastardi’s forecast of much more snow than normal for our part of the United States.

Now we don’t want to squelch an otherwise great time and phenomenal reason to celebrate Autumn in Banner Elk, (and 7 foot-plus Tommy Burleson is too huge to tick off) but I remember a few years ago when he and Krege had to "read a worm" that had NO black on it whatsoever and somehow they were able to detect some snow in the forecast. 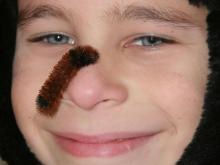 This time they were presented with a winning worm that at least had five black bands and they failed to conjure up a snowy forecast.  WHAT’S UP WITH THAT???

Maybe it was the fact that Burleson, Krege and crew felt the pressure of the WJHL (Johnson City) television cameras!  Maybe it was the l-o-o-o-n-n-n-g-g-g cold day that had hard working, festival volunteers out in the cold since 5-6am Saturday morning.  Maybe they couldn’t help but be wishing for warmer temps and it affected their "reading".  Whatever the reason, we’re thinking that Wilbur-the-worm actually MEANT to predict colder than normal temps for nearly all but perhaps two weeks of the upcoming winter and about 50% more snow than normal.

Regardless, it was a great weekend to be in the mountains and now all we’re waiting for is for the real pros to confirm Bastardi’s forecast. We’ll eagerly await the NWS and Meteorologist Brad Panovich and we suspect that we’ll hear that Wilbur had a Tim Tebow-like concussion from being dropped to the floor of the race board. (It was COLD out there and I personally dropped worms three times.)  Those drops obviously caused more than just Wilbur’s outer body to be fuzzy.

This has the makings of a GREAT ski and snowboarding season around here!

Previous Post
Cataloochee is not going to be able to open today as hoped
Next Post
The 1st Annual Banner Elk Downtown Getdown is this Sunday!