This news is certain to bring some early morning frowns to ski and snowboarders who had planned on skipping work and school to head over to Cataloochee Ski Area for the official opening day of the 2009-2010 ski and snowboarding season here in the Southeast and Mid Atlantic. 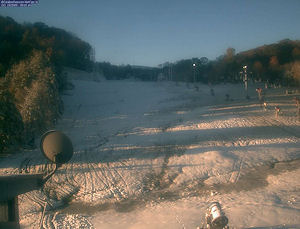 <Cataloochee at 8:19am this morning

I just heard from Chris Bates of Cataloochee at 7:15am this morning. They are not going to be able to open today as they’d hoped. They had an inversion in temps overnight and were not able to pull it off. If you had plans to head over for opening day – please be aware that they will not be open.

Chris told me that they’d shoot for the next cold days to make snow and open.

There will certainly be a lone couple of people who might take some delight in the fact that Cataloochee was not able to pull it off, but you have to reward them for trying. I can tell you that most of the ski area management teams were pulling for Cat to make it happen because good news travels fast.  If Cataloochee had been able to open as they had intended at 1pm today, there would have been numerous television stations across the Southeast talking about the ski industry in this region and that is great for all of the ski areas.

Cataloochee’s General Manager, Chris Bates called me early enough so that we could spread the word as quickly as possible.  He said, "Mike, unfortunately we are not going to be able to open today as we’d hoped." You could hear the disappointment in his voice as their crew really does their best to give their fans every day of skiing and riding possible. By the way they have their SEASONS PASSES ON SALE RIGHT NOW FOR $575 for singles!

It’s 23° at Beech and Sugar Mountain this morning and a quick glance at Snowshoe’s Silvercreek weather station shows that it is 26° up there and 29° at Wisp Resort. Cataloochee is reporting 29° at this time (8:07am).

For those of you who are certain to email us asking "when will it be cold enough again to make snow?" – our answer is – we don’t know.  What we all have to remember is that we are still more than TWO MONTHS AWAY from the start of winter, which officially arrives on December 21st.  We are still more than a month away from the traditional start to ski season as most ski areas usually look at Thanksgiving weekend as a good starting date.  So we have plenty of time.

We’re not seeing any really colder air on the horizon and it will certainly not be cold enough to make snow again within the next seven days across the region (according to the National Weather Service).  Heck, we looked at the forecast for Snowshoe, West Virginia and it is supposed to be 67° on Wednesday afternoon!

Maybe the snow that was put down by Cataloochee and Snowshoe might just melt and drain back into the ground – but SO WHAT.  They should be rewarded for making the effort.

Stay tuned for more information and updates as we’re JUST GETTING STARTED AROUND HERE!

Previous Post
Cataloochee is not going to be able to open today as hoped. See the update below
Next Post
NINE YEAR OLD NOAH JENS OF CHAPEL HILL WINS $1000 AT THE 32ND ANNUAL WOOLLY WORM FESTIVAL