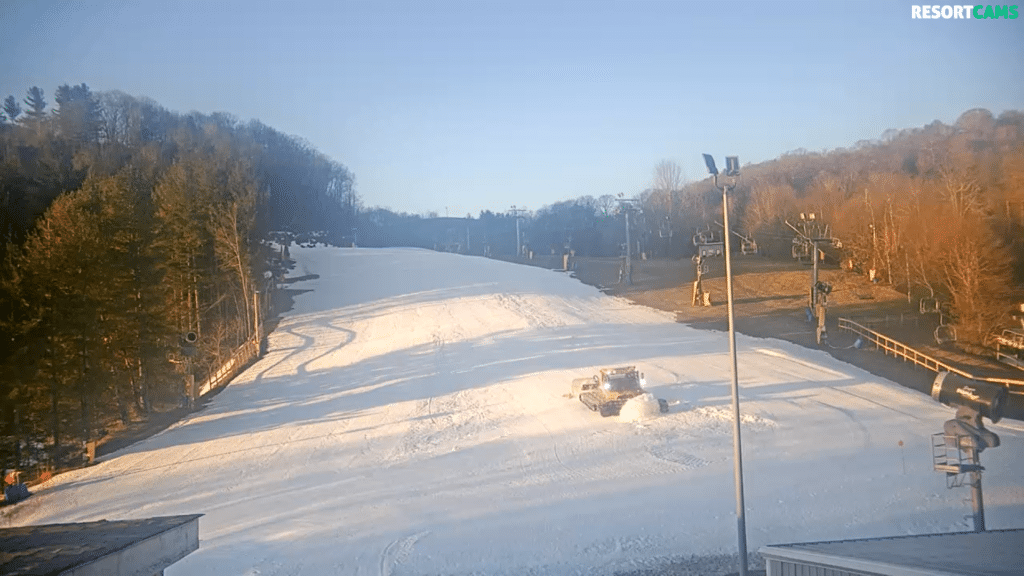 …and we have a little natural snow / dusting to report. Mother Nature just HAD to spit out a little bit of a measurable snowfall – just to mess with our season-snow totals. If you missed Saturday’s FirsTrax post, we posted a chart that showed each ski resort’s snowfall totals for the 2021-2022 ski & snowboarding season. We also included the snowiest season for each (over the last 18 years of record keeping) and we threw in each resort’s average, annual snowfall and what has happened for the past 18 seasons.

…and as I mentioned, Ma Nature dusted the top of Beech Mountain, Canaan Valley and Timberline Mountain with a little 0.3″ of snow overnight. Snowshoe Mountain picked up 1″ of new snow and it was still snowing as I was checking the LIVE SKI CAMS first thing this morning.

…and NOW, for this next to the last, Sunday Ramble for the season.

After a 70° Sighting on Saturday…

After wrapping up the Saturday, FirsTrax post, I headed outside as any good, mountain-loving, outdoor adventurer would do as seasons begin to transition from Winter to Spring. I’ve been clearing a lot that I recently purchased next to my home. It has a huge, rock, outcropping, with a 40′ drop off the back of it which will end up becoming kind of a “secret garden” area in short order. However, for now, it has become a “supplier” of firewood for the next few winters.

Later in the afternoon, we drove through Banner Elk, past Sugar Mountain Resort. The slopes really looked quite good from the road (Hwy 184). Oma’s Meadow was looking pretty narrow – but the rest looked nice, which is remarkable considering the fact that it was 67° at the foot of Sugar.

I drove over to Watauga Lake, where it was 72°. My beloved, summer getaway, Lakeshore Marina was a little busier than I expected as boat-owners have already begun waking up from a long winter to begin spring cleaning and “boat work”. As I walked across the lake, walk-bridge over to G-dock, it hit me. BAM.

Spring Fever! Ski Season is Over.

To be clear, while Appalachian Ski Mountain, Massanutten Resort, and Timberline Mountain will all call today, Sunday, March 20th their end to the ski & snowboarding season – Beech Mountain, Cataloochee, Sugar Mountain, Snowshoe Mountain and POSSIBLY Wisp Resort will extend things another full week before closing the slopes NEXT Sunday.

However, as I boarded my boat on Saturday afternoon it hit me that my season ended LAST Sunday when I did my last turn of the 2021-2022 ski & snowboarding season by hitting up the Thunder Struck trail at Timberline Mountain in West Virginia.

I grabbed a couple of cold, Blue Moons, and invited my wife to just sit on the back of the boat, staring out at a gorgeous, aquamarine lake – and we toasted to a really great ski season.

Man I can’t complain, because my last turns, last weekend were some of the best I’d experienced all season long. Timberline and the Canaan Valley area saw 7.2″ of natural snow last weekend and I got in 20+ runs over the two days there, alternating between White Lightning, Thunder Struck, Dew Drop and Twister. Those final 20 runs of the season took me to 97 trips down one slope or another, around the region, this season. (Man I should have done at least THREE MORE!)

As I was typing this, it occurred to me that I COULD hop over Appalachian’s Meltdown Games today and get in several laps. But alas – I REALLY DO have a bad case of Spring Fever.

I will leave it to you guys to share some photos and experiences for this next week ahead.

As I was checking out today’s happenings at the ski areas that ARE open today, I saw where Sugar Mountain Resort was hosting their annual, Easter Egg Hunt on the Easy Street Slope. That is always a nice, season-ending event at Sugar. However, it occurred to me that Easter isn’t until April 17th this year – and THAT made me remember that I KNOW that Sugar has actually held one of those Easter Egg hunts ON an Easter Sunday.

…and THAT made me question HOW. (I told you guys this was a ramble, right?)

I’ll admit that I had to actually look it up, but Easter always falls on the first Sunday after the Paschal Full Moon. And if you’re wondering what that means, it’s the first full moon after the vernal equinox. The earliest day that can happen is March 22nd – hence my memory of Sugar holding an egg hunt ON Easter Sunday. The lastest that can happen is April 25th, but that hasn’t happened since 1943 and no Southeastern or mid-Atlantic ski area was open back then – and even though it MIGHT have been a little colder back in those days – it is not likely that any ski area would remain open or make it to April 25th!

When it the NEXT Easter Sunday that might coincide with a Sugar Mountain slope opening? Sunday, March 31st of 2024.

You learned something today? Right?

For those who don’t know who David Lesher is – he’s a self-professed, happily retired, weather guru of Canaan Mountain Summit, West Virginia. He’s been archiving weather data as long as we have – just for the Davis, WV area.

The Total winter snowfall of 84.5 inches so far is nearly 60 inches less than the long term average for this date, the least since the winter of 2001-02. (Translation: David is reporting that Canaan Valley and Timberline Mountain’s long-term average is actually 144.5″, rather than the reported 180″.)

Another Kudos to Lees-McCrae Snowboarding Team

I reported this news earlier this week, but it warrants repeating that a little, itty-bitty college in Western North Carolina holds the distinction of being the 2022 National Champion Snowboarding Team in BOTH Men’s and Women’s snowboarding.

The event was held in Lake Placid and they not only WON the National Championship, they DOMINATED it…beating major colleges and Universities from all levels (Power 5 down) – and from all over the United States.

SkiSoutheast.com is PROUD to support and sponsor the Lees-McRae Snowboarding team. Lili Bauer won the individual National Championship (Alpine Combined Women’s Snowboard) and I am also proud to say that I’ve known Lili since she was barely walking, as her dad and I co-coached our daughters in soccer for more than a decade. Lili is the daughter of longtime, Sugar Mountain Resort ski school director, Len Bauer. Len’s a longtime buddy of mine and neighbor, boat owner at Lakeshore Marina.

The fact that tiny, Lees-McCrae won the National Championship has everyone in the small ski community of Banner Elk and Beech Mountain buzzing.

“We’re not a varsity sport here at Lees McRae and so not fully funded,” shared Coach Aaron Maas. “These kids managed to raise more money for the program than we had in the operating budget for the whole year with your support.” Maas told how the athletes worked on numerous projects to help raise the funds to travel up to Lake Placid, New York for Nationals, where they spent a week competing. “It’s all their hard work and dedication that has now paid off,” Maas said.

Beech Mountain Resort serves as the home mountain for the team where practice takes place 3 and 4 days a week. The season begins the first of January with the team traveling most weekends for race competitions. “And now we get to celebrate,” Maas said. “All their hard work has paid off immeasurably!”

“It’s amazing, and highly improbable that a small school like Lees McRae would go up to the Nationals and battle and challenge against some of the largest schools across the country,” Maas said. “These were schools from out west and up in the northeast. And for us not just win, but dominate!”

You can read more about the team and the road to the championship with these two, well-written stories:

Read it ON The Bobcats Page

Here are some parting shots:

The photo of the day up top and here is from Cataloochee Ski Area this morning, farming some snow:

Notice in the top left of the photo above, you can actually see a bare, Oz Run on the back side of Beech Mountain.

That will do it for me today. Congrats to Lili Bauer and all of the team of both the men’s and women’s snowboarding team. Email me if you like at [email protected]