MOTHER NATURE IS BIPOLAR AS 2-4″ OF SNOW FALLS! 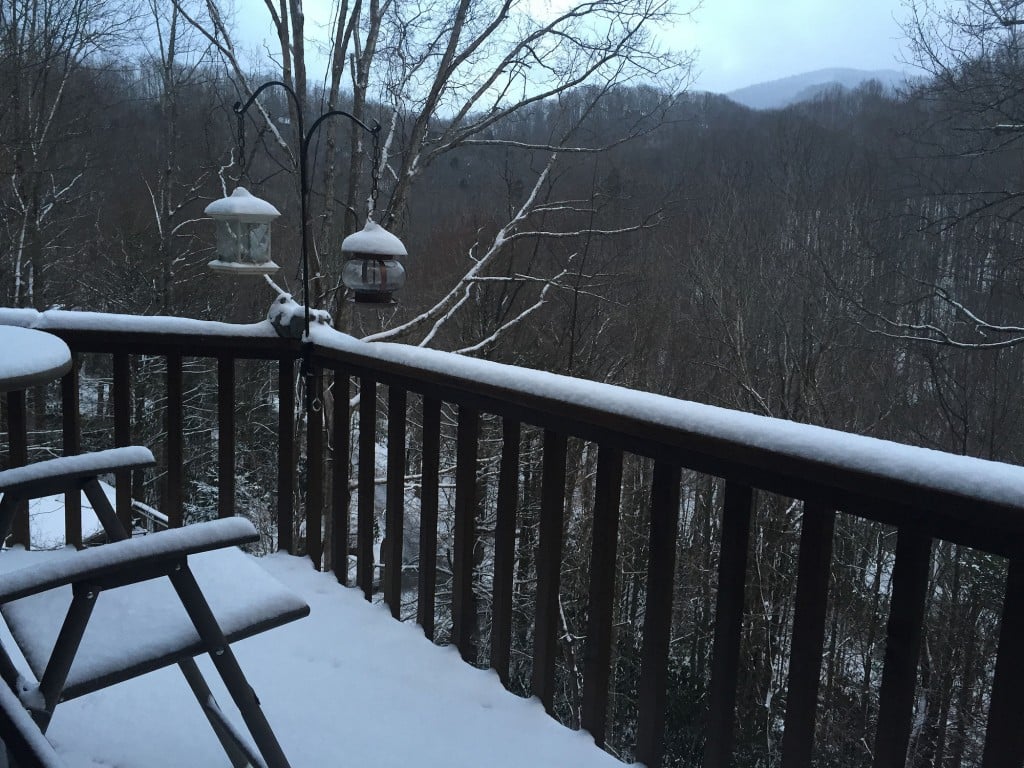 My youngest daughter woke up this morning and looked out at the 2-3″ of new snowfall and she said, “Good grief it was in the 60s on Thursday and now it’s freezing and snowy!” She added, “Mother Nature is bipolar!”

The calendar says that it is Spring, but it looks like Winter all over again this morning. As I toured the ski resort communities I witnessed low temperatures from 5° at Canaan Valley to 11° at Sugar Mountain this morning.

In the same vein of “If a tree falls in the forest, does it make a sound?” I present to you this question, “If it snows after a ski resort closes for the season, does it count towards their seasonal snowfall total?”

I say it does, although many of the closed ski resorts are not claiming snow…although it fell over the last 24 hours. In fact, it snowed on and off ALL DAY in Banner Elk, Boone and Blowing Rock, North Carolina. From the looks of things you can “ditto that” at the WV ski area communities as well as Snowshoe, West Virginia has now seen 6″ of snow within the last two days.

It’s STILL snowing here at my house this morning in the beautiful metropolis of Sleepy Hollow. With a brisk bit of wind it appears that 2″ fell here, but in more protected areas on the front side of my home it looks more like 3″. So I’ll go with 2.5″.

For the resorts that are CLOSED for the season, I’m not reporting the 24 hour snowfall, but I AM reporting it for the seasonal snow, because quite frankly I witnessed (via webcams) people sledding in it at Beech Mountain and on the Parkway yesterday evening. If people are playing in it…it’s got to count, right?

Although Beech Mountain Resort is closed for the season, they picked up 4″ of new snow in the last 24 hours. Ditto that for Sugar Mountain (which is open).

I noticed that the Virginia and Tennessee resorts only saw a dusting of snow to speak of so I kind of assumed that this little snow storm missed the upper tier of our ski area coverage…meaning Maryland and West Virginia.

NO, NO, NO. Not to be outdone…Snowshoe and the WV ski resorts picked up some significant snows as well. Snowshoe has seen 4″ in the last 24 hours and 6″ over the last 48 hours. Davis, WV, which is home to Canaan and Timberline resorts picked up 4″ or so as well.

Temperatures are winter-like on this second week of Spring 2015. Here are just some of the noted ones I see this morning. I’ll report the ski resorts that are STILL OPEN FIRST:

Snowshoe is playing on a region leading 39 of 60 trails of PACKED, FREAKING POWDER on March 28th.

Sugar Mountain Resort – 11° and 4″ of new snow. They are open with 9 slopes and 2 lifts with pretty awesome conditions for today. …and it looks like Gunther will call it quits on a high note as they are NOW informing their guests that tomorrow, Sunday WILL BE their last day of the ski and snowboarding for the 2014-2015 season.

Celebrate the end of the winter season at Sugar Mountain Resort tomorrow, March 29th. The Johnson Brothers perform from 2 pm until 5 pm and the ceremonial snow burning begins around 4pm.

Bryce Resort – They are open for ONE MORE DAY (TODAY) with 100% of their trails open!

The Homestead – They are open for today and Sunday. They saw a TRACE of snow and will play on 5 of 9 slopes for day skiing only.

Guys and gals…I am headed out to do some SPRING CLEANING of my basement so…that’s going to it for me today. If you’re lucky enough to be near a ski resort (that it open) go play in the snow.