Sun Tans and Riding the Snow! A Perfect Way to End the Season. 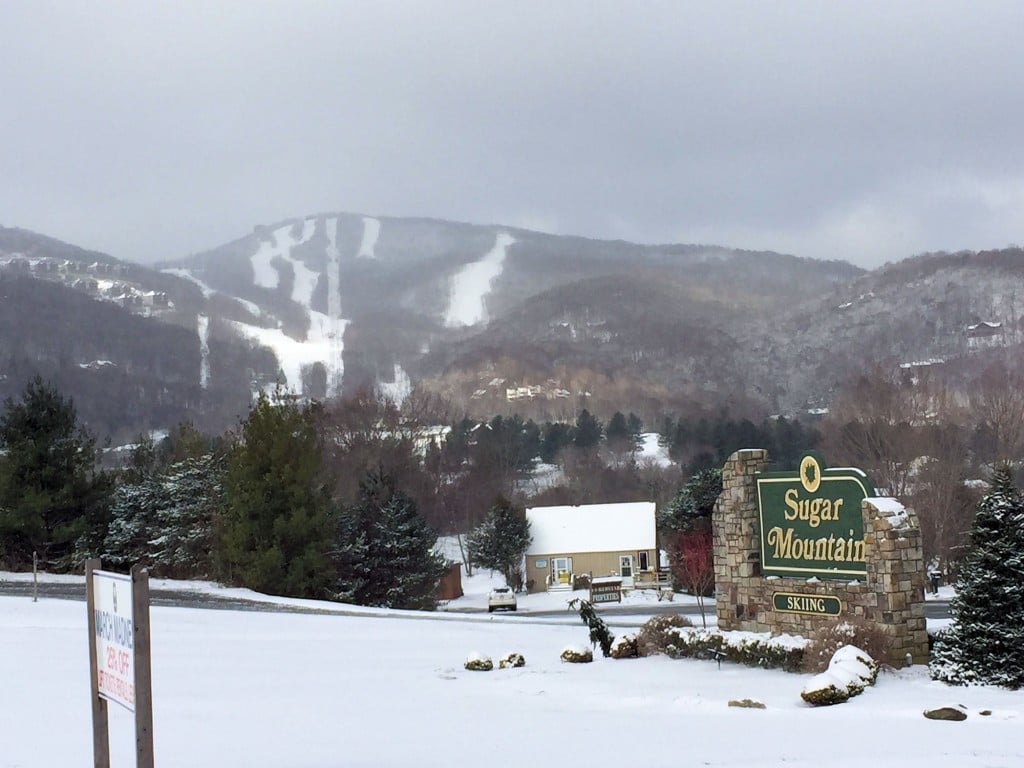 Appalachian Ski Mountain – Reporting that they made snow. It’s 34° and that should make for some awesome turns on what is OFFICIALLY App’s last day of the 2014-2015 season. They will be open today and tonight with 9 of 12 trails open with a groomed 40-64″ base.

They will be closed this next week and then reopen for Easter Weekend to raise money to help build the Middle Fork Greenway. Ski or Ride next Saturday, April 4th or Sunday, April 5th and ski tickets will be $25 each with proof of paid High Country Lodging and proof of residency in Watauga, Ashe, Avery, Johnson, Caldwell or Wilkes counties.

Without proof of residency or lodging your lift pass will be $50 and ALL Saturday’s ticket sales will go to support work of the Middle Fork Greenway initiative.

You can read more about the Middle Fork Greenway initiative at: http://www.middleforkgreenway.org/

Sugar Mountain Resort – This is Sugar’s last day of the 2014-2015 ski and snowboarding season. They will play on 9 of 21 trails for day sessions only today and then they will conduct their annual ceremonial “Snow Burning” around 4pm.

I had to run some errands early on Saturday and Sugar was looking pretty awesome so they will close on a high note today after a banner season for certain.

Omni Homestead Resort – It’s 14° on this second weekend of Spring 2015 and Homestead is operating for their final day of the season today with 5 of 9 slopes open for day sessions only today.

Snowshoe Mountain Resort – Not to outdone (at any aspect of winter fun in the Southeast and mid-Atlantic – it is 9° at Snowshoe this morning. They will ride for day sessions on 39 of 60 trails today which STILL includes Upper AND Lower Shays Revenge and Upper and Lower Cupp Run. Snowshoe will operate daily through NEXT SUNDAY, April 5th.

That’s it folks! Those are your “Four Horsemen of the Winter” for 2014-2015 as we have two ski areas open in North Carolina, one each in Virginia and West Virginia.

After today Snowshoe Mountain will carry the torch and operate for one more week and both Appalachian and Snowshoe will operate NEXT weekend before calling it an end to the season.

Temperatures will SOAR Tuesday and Wednesday of this next week, making for some awesome opportunities to see some red faces, white legs and fun times on the snow.

By ALL ACCOUNTS this has been a VERY, VERY successful season in terms of skier-snowboarder-visits. We’re thinking that we will hear of some single-season records being broken at various resorts. All of them did well – which is very good news to the bean counters and those of us who know that successful seasons create those capital investments back into our favorite ski hills – which creates an even better experience for seasons to come.

With only Snowshoe to remain open for this next week, and then with only one more weekend of skiing for Appalachian and Snowshoe next weekend – I’m going to allow our man Kenny Griffin to simply update the SNOW REPORT PAGE for this last week of the season. In fact, we’ll probably just advise you guys to check out Snowshoe’s Trail pages.

With that said, I want to thank Kenny, theKenDog Griffin for his daily updates and FirsTrax commentaries for every weekday of this past season. It takes a lot to keep things interesting at times. I mean there’s only a couple of ways that you can write about how nice the conditions are and how many trails are open. Thanks to Kenny for keeping it interesting.

Thanks to our weather peeps for their regular weather video input all season long. A Special Thanks to Herb Stevens who kept us going with good video input this season. Brad Panovich was hand-cuffed a bit this season as their staff at WCNC in Charlotte was short-staffed a lot of the season, which limited our “Brad Panovich time” this season. Still thanks to Brad for doing what he could, when he could.

Thanks also to columnist, friend and “Snow Guru”, Joe Stevens of Snow News is Good News fame. Joe is a steady rock in the industry and certainly the “Mouth of the Southeast and mid-Atlantic when it comes to the ski industry.

…and THANKS TO ALL OF YOU who make what we write about and report about here on SkiSoutheast.com worth doing. Thanks for those of you who wrote and commented on various things.

God-Willing we will do it all again beginning sometime in October-November for the 2015-2016 season. We’ve already heard of some pretty cool enhancements that are planned at various resorts. We’ll try to post a few updates during the off-season and keep you informed of those and other news.

We’ve heard some rumors or “insider news” of some changes that are coming in terms of resort ownerships and managements…and we’ll get to the bottom of those and report when we can.

If you need a little fix of what’s happening at YOUR favorite mountain. be sure to visit ResortCams.com as we have dozens of LIVE CAMS posted and more coming online throughout this Summer.

Thanks Guys and Gals.