Massive Crowds Coming to the Mountains!

Sunday is my day to ramble a bit, and sometimes slightly “off topic”. So grab your cup of coffee and hang with me for a little bit.

Today’s Photo of the Day is from this morning via ResortCams.com – The views from atop Eagles Nest in Banner Elk are awesome. I HIGHLY recommend visiting ResortCams at around 7am each morning as we get some of the prettiest sunrises and sunsets! (I share some samples later in this post!)

Things are usually pretty slow in my SkiMail inbox on days when the slopes are packed with visitors. After all, more people are on the slopes playing and not hitting us up via email, etc. However, as I have shared numerous times already within this first, one-third of the season – this is NOT a typical ski & snowboarding season. Yesterday my inbox was rather crowded and for the most part it was from many of you guys complaining about how crowded the slopes are.

Some were questioning about how resorts can be so crowded when (and I quote), “I thought resorts were limiting the number of people on the mountain.”

As we have been reporting all season long – that isn’t exactly what is going on. I think there is a perception that is being misunderstood by the public at large. We were predicting a record skier-visit season, before the season even began and you can’t have record skier-visit attendance if a lower number of lift tickets are being sold.

However, resorts ARE limiting the number of lift tickets being sold. Ummmm, what? How does that work?

We’ve been reporting all summer, fall and now winter about how high the demand is for ANYTHING to do with travel to the mountains. Our highways and byways are packed with more visitors than I have personally ever witnessed and I can tell you that is the sentiment and opinion of every business owner I know across our entire region.

Resorts ARE limiting ticket sales and we have already reported many ski resorts being SOLD OUT on numerous days already this season. They are SOLD OUT, therefore they ARE limiting lift ticket sales…but they are limiting it to record numbers of attendance…and to the number of people that they feel they can safely put on their slopes – and we’re talking ‘physical safety’.

A Weather Channel reporter who recently visited Sugar Mountain Resort reported, “It is safe to say that every industry worldwide has seen pandemic related challenges – but at a ski resort you can be social, you can be distanced, ventilated, and if you do it right – safe.”

He’s right, and families have flocked to our ski resorts in record numbers thus far during the 2020-2021 ski & snowboarding season. Every attraction in the High Country has been attended in record numbers. 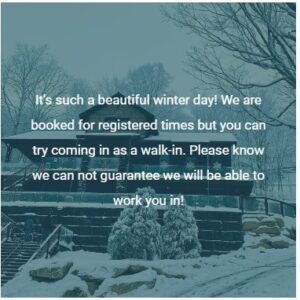 The Wilderness Run Alpine Coaster opened back during the summer and they have had to turn away visitors nearly every day since opening as they SOLD OUT.

…and they’ve continued to do that during this winter. Note the image capture on the left – compliments of their website.

One guest that I recently interviewed at a local ski resort told me, “Oh boy, this has been such a SPECIAL year. We’ve become so much closer as a family. We are often cooped up inside and the mountains and skiing gives us that chance to get away, get outside and enjoy these adventures more.”

That sentiment is being shared in record numbers so far this season. Since about the time that covid-restrictions hit – people began to figure out that a safe place to go was the mountains. The Great Smokey Mountain National Park, and the Blue Ridge Parkway have seen record numbers of visitors since April of 2020.

Another recent visitor shared the following email with us:

“So I had a friend who invited my boyfriend and I to join them skiing this weekend. We drove up from Jacksonville (FL) and when we got in on Friday they told us that resorts were very busy and that some were requiring people to buy lift passes a day or more in advance. Since our trip was a last minute deal, we couldn’t do that. So we drove up to Beech only to hear that they were already sold out! We drove back down to Sugar and by the time we got there, they were also sold out. So we called ahead to Appalachian and they were sold out. WT&$^! We ended up staying at Sugar to snow tube, but even they were wall-to-wall with people. The line to get to tube was more than 40 minutes long! Supposedly they limited tubing to 100 people an hour, but that still made it 10-20 people in each line waiting to tube! We made it down a few times, but this is crazy! So is the limit, the number of people you can fit on a mountain and not have a riot on your hands? We came to ski and couldn’t!”

Here was another reader’s take:

“I’ve been following skisoutheast for years and love your view on things. After reading about how crowded the resorts have been, I decided to take your advice about visiting mid-week. Another of your tips is to ski early. I would always sleep in a little and hit the slopes around 11am or so. Last week, I figured I’d get to the slopes by 9am and boy what a difference! We skied until 10:30 or so with no wait at the lifts. Thanks for turning us on to that little pearl of wisdom! However, my wife and I could not believe how crowded things got by 11am. It was a madhouse. They cannot be limiting tickets. I have never seen lift lines like I saw Thursday. I guess the mountains wouldn’t be so crowded if all this damn snow would stop! Thanks for all you do on the site – but 40 minute lift lines on a Thursday!?!?!”

I had to laugh at that one. He was pretty much spot on! Snow is “white gold” in these parts and there is no question that our weather has been so conducive to provide near perfect conditions. Those conditions are certainly ONE of the reasons our mountains are so crowded. However, I’d bet we’d be nearly AS crowded even without the natural snow, because our resorts depend more on manmade snow anyway.

As I mentioned yesterday, ski resorts like Snowshoe, Timberline and Canaan Valley are nearly two-feet below normal for natural snowfall this season and that doesn’t seem to be hurting traffic whatsoever. Canaan Valley’s David Lesher is the “weather guru” for that region and on Saturday he shared that our mountains certainly get the BULK of our annual snowfall in January, February and March and even so, Canaan Valley is 13″ below normal for snowfall on this date each winter.

…And the Crowds Keep Coming

Due to the high demand for tubing and the large number of guests on Weekends & Holiday Periods, you may encounter a wait time of 2 or more hours via the Tramway or parking on the mountain. If mountain parking is full, you must take the Aerial Tramway from the Downtown Tram Mall (please communicate with Ober Gatlinburg staff about your session time). Please schedule your time to allow for delays to prevent missing your scheduled tubing session as no refunds or exchanges are allowed. Tickets are non-transferable and not for resale.

I also ran into Sugar Mountain’s Len Bauer late on Saturday and Len looked BEAT. He shared, “Mike, I have not had a day off since the season began. I don’t mind it because I love my crew this year and love the mountain. We’re busier than we’ve ever been.”

As the graphic to the right will attest to, Snowshoe is already SOLD OUT for January 16 & 17th, the 23rd and 24th as well as busy weekends into February!

SPEAKING OF SNOW AND MANMADE SNOW…

(Hey, I TOLD you Sundays are my days to ramble….) 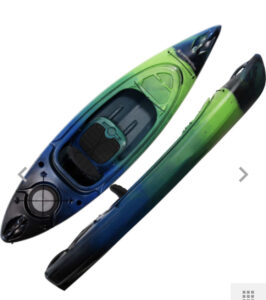 It snowed a bit more last night – here in the High Country. It was only a TRACE/DUSTING, but it snowed. I drove over to Johnson City late on Saturday to purchase a new kayak. It’s definitely NOT kayak season, but another example of how packed our mountains have been since summer is that you could not FIND a kayak in stock ANYWHERE back in June, July and August. Dick’s Sporting Goods told me that demand was so high from people just wanting to get outside that they could not keep kayaks in stock for more than a few hours. “A truck would deliver new kayaks and we couldn’t even get them on the floor and they’d be gone.”, said “Tammi” from Dick’s Sporting Goods in Johnson City.

Check out my newest addition to my kayak “fleet”. >>>

As I reentered the High Country I noticed a powdery snowfall happening. Sugar was blasting their slopes and since additional snow was not in the forecast, I speculated that some manmade snow was blowing across Highway 184. Nope, when I got home, my jeep was covered in snow again.

Snowshoe is making snow now on LOWER Shays Revenge. That trail has now passed me by. I can ski it, but it’s too much work! I’ll stick to my favorite of Upper Shays Revenge to Lower Cupp. Also really like Upper and Lower White Lightning at Beech – and it’s hard to beat Gunther’s Way at Sugar Mountain. Gravity at Canaan Valley is another favorite BLACK trail, and I also really enjoy the speed and length of the Timber Trail, top-to-bottom at Canaan Valley Resort.

The two shots below were sent to me from Braden Cox while at Appalachian Ski Mountain on Saturday. Click to Enlarge. 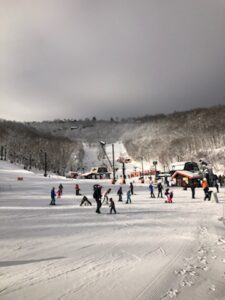 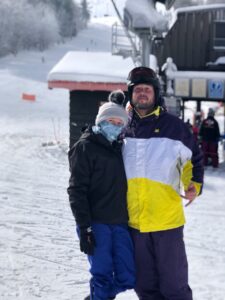 By the way, Braden called me and shared, “We had a blast at Appalachian Ski Mountain today (Saturday) but could not believe how crazy the lines were after about 11am.”

The Southeastern Ski Industry Loses One of Our Good Guys…

On Saturday, the news began to spread that Bruce Anders, the popular President of Ober Gatlinburg had passed away on Friday due to complications from Covid-19. That is certainly terrible news. A statement from Vice President Kent Anders, on behalf of the Executive Committee and the Anders family shared, “We ask that you keep the Anders family in your thoughts and prayers. It is with a heavy heart that we inform you of the passing of Bruce Anders President of OBER Gatlinburg, Inc. on Friday January 8, 2021 at the University of TN Hospital due to complications from COVID-19.”

We ask for your prayers for his wife Cindy, son Marcus and his wife Abby, son Jared and his wife Molly, and two unborn grandchildren due later this year.

That’s it for me today. The conditions are GREAT at every ski resort in the region. There is PLENTY of snow, great slope conditions, more slopes opening every day AND the weather pattern looks good going forward. Yes, you MAY need to book in advance to keep from finding a resort SOLD OUT, but this season IS the season to hit up your favorite. Perhaps plan on a mid-week getaway if you want to avoid the SOLD OUT crowds.