Some Light Snow Fell and Most Ski Resorts Made Snow! 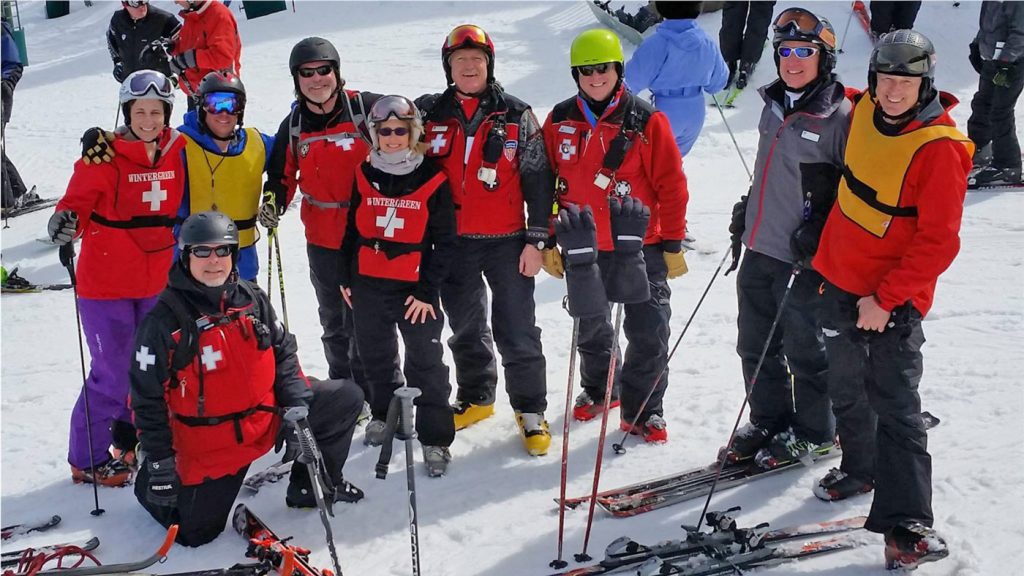 Sunday’s are usually kind of a slow news day with not much going on, but that is not the case this morning. I have a lot of news and notes to share so I’ll dive right in and things will be posted kind of randomly today. Be sure to check the SNOW REPORT for all of the details.

On Saturday morning I speculated about some of the ski areas ending their season early and that we might be able to tell which ones might be “showing their cards” a little early by NOT making snow last night. We’ll only report and let you guys do your own speculating.

Here are the resorts that DID make snow last night and were still doing so this morning: 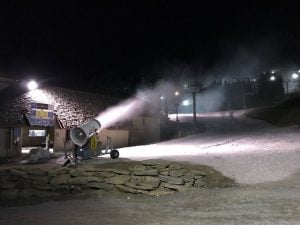 Those ski areas which did not make snow have to be looking at the rain coming in this week OR speculating an early closure for the season – OR I guess they COULD be looking to make snow after the rains pass IF it gets cold enough. 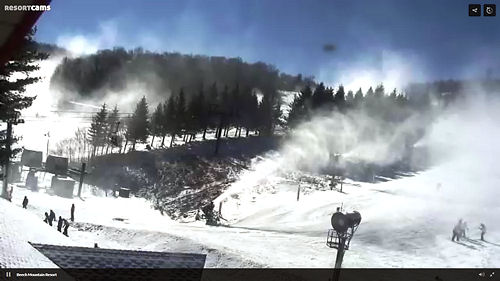 Check out the TIMELAPSE

Speaking of Snowmaking, man you guys have GOT to watch the Beech Mountain Camera TIMELAPSE to see the difference in conditions from JUST 14 hours or so of snowmaking!

Once you click on the image, be sure to then click on the TIMELAPSE ICON in the top right corner of the video!

WHAT A HUGE DROP IN TEMPS!

Late on Saturday I was walking around in Boone wearing a short-sleeved t-shirt. It was nearly 60° and comfortable. Later – around 5pm – you could feel the air turning icy, but it was still not that cold. Then not long after it got dark, it turned frigid and the snowguns cranked up.

The largest swings in temperatures were in the 30° difference-range at all of the mountaintops. The two greatest swings were: 31° colder this morning than on Saturday morning at Beech Mountain. It was 11° at Beech and it was 42° twenty-four hours ago!

Speaking of Massanutten Resort, they WERE among the ski areas that made snow, but they posted, “Due to unseasonably warm temperatures, the ski slopes will begin an abbreviated schedule Sunday, February 26. Operation is weather dependent and could vary day to day. Please call ahead to check conditions and availability.”

Beam Us Up Snowshoe!

Snowshoe’s Cams and Phones have been down since yesterday. Our Kenny Griffin reported that he had tried to call and Snowshoe responded via Twitter that they were trying to get them back up. There WERE thunderstorms in the area on Saturday and perhaps it was hit by lightning. Snowshoe’s lifts were delayed to open on Saturday due to those storms, so the idea of a lightning strike to their internet and phones is not without some merit. That all cleared out and even though their phones and webcams are all down, they DID make a ton of SNOW!

Snowshoe’s marketing department are always working overtime and we found this cool marketing post for their Spring Break weekend which takes place in two weeks. 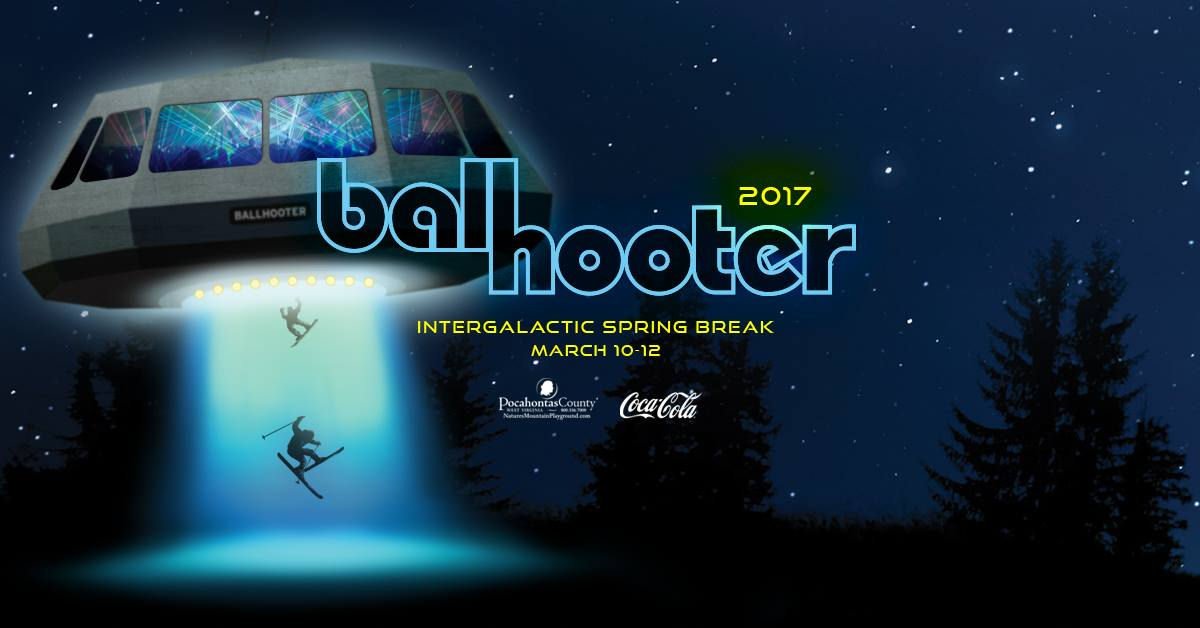 Sean Cassell and their mountain ops crew posted, “Winter is far from over here at 4,848ft! We’re making snow left and right, and Mother Nature is pitching in some as well with a light dusting so far. The forecast for next weekend’s Homegrown Festival is looking fantastic, so plan your trip today!”

Ummmm – that forecast is ALSO GREAT for the SkiSoutheast Snowshoe Summit going on there next weekend. We are up to 67 people coming to join us. You should too!

Wintergreen Resort held a “Ski With a Ski Patroller Day” on Saturday to promote recruiting becoming a patroller. Wintergreen didn’t report their snowmaking overnight on their snow report – but they did. Even so, they are now only open for day sessions for the rest of the season.

Appalachian Ski Mountain posted, “Peak season conditions are back with overnight snowmaking on all open slopes! Reported 4″ of new, manmade snow overnight! Appal Jam and Candied Appal will be closed for the Shred for the Cup Slopestyle, which will run from Noon to approximately 3:30pm. These slopes will open to the public immediately following the event.”

Good GRAVY that was some Snowmaking last night!

Appalachian reported a 4″ jump in base with optimal snowmaking ops, but Cataloochee Ski Area just might win the prize as they are reporting a jump of ONE FOOT of base over the last 24 hours. They reported a base of 10-16″ on Saturday morning and they are now reporting 20-28″.

Wolf Ridge Resort did not make snow. Interestingly they were the only ski area on Saturday morning to actually announce that they would have the snow guns OFF all weekend. We speculated that they would maybe run them overnight, but they didn’t. So now we can only speculate that they are looking at an early closing date. That is ONLY our own speculation as we’ve gotten no word out of The Wolf crew all season.

Are they off for good?

Omni Homestead Resort was grooming their trails for one last day of skiing and snowboarding at the luxury, Virginia resort. Lynn Swann posted, “Thank you for your support this season. We look forward to seeing everyone in about 290 days!”

Wisp Resort – We are kind of surprised that they didn’t make snow. The Maryland resort was pretty conservative to get opened up this season which rankled a lot of their fans and it appears that they may be preparing to just ride the rest of the season with the snow they have. They are making noise like they are winding down. Wisp’s mountain ops posted, “Ski & Ride Operation Reminders: Night skiing will close at 8:00pm on Friday & Saturday, February 24 & 25 and the Last First Tracks – the last first tracks of the season is Saturday, February 25 starting at 8:00am.”

As if this FirsTrax report hasn’t been random enough – here’s more.

Except for one weekend, Sugar Mountain Resort NEVER had Oma’s (old Big Red) open this season. That was for a race weekend and other than that they didn’t even make snow on it, which HAS to be upsetting for the Sugar Ski & Country Club peeps (and their visitors looking for ski in-ski out.)

FOUR STYLES OF BOGGANS, STICKERS and MORE…oh my.

I met up with one of our hat vendors on Saturday and picked up the new SkiSoutheast hats that we are giving away at next weekend’s Summit at Snowshoe. We also picked up FOUR styles of beanies and we have new tshirts and four styles of SkiSoutheast stickers. Tons of SWAG will be handed out next weekend! 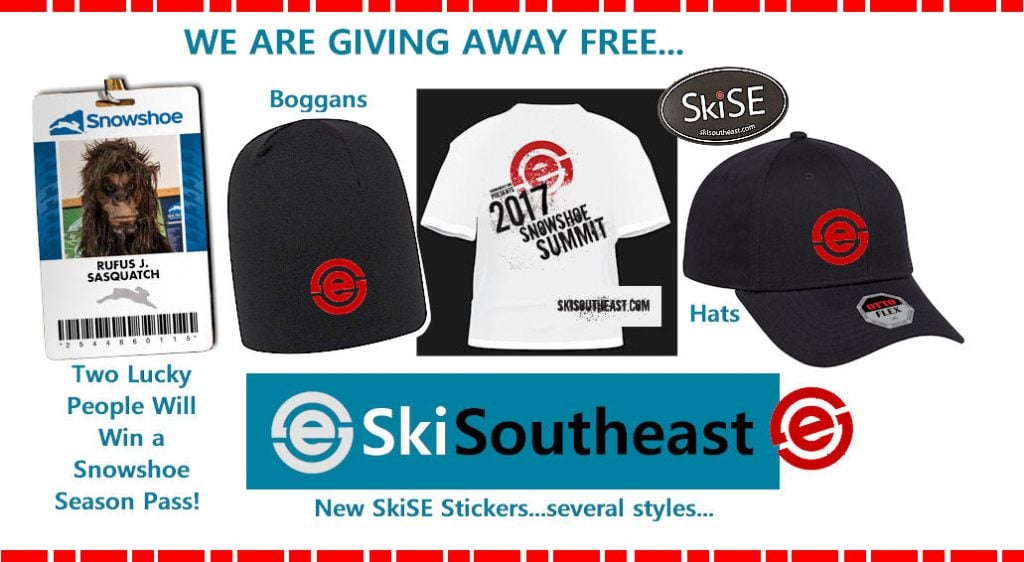 I’ve been keeping a low profile this ski season as I watch the unusually mild weather wreak havoc on the ski resorts here in the southeast. Now that it’s turned cold again and the snow guns are firing, I have a confession to make. This warm winter? It’s my fault. After getting buried with nearly 3 feet of snow in January 2016, I bought a snow blower. As soon as I did, it quit snowing. I normally get 2 to 3 feet of snow here at my home nestled next to the entrance to the Shenandoah National Park. This year? I’ve had 2 to 3 inches in 2 piddly storms. The snow blower sits unused in the garage. What have I done?

On a serious note, I check the Ski Southeast page every day. You, Kenny, Joe and the rest of the staff have done such a fine job that I really haven’t had anything to add. Looks like  a great day to ski today…glad to see the return of the cold weather.

One more thing…I bought a riding lawn mower last spring. After that it quit raining. I’m going to stop buying any more lawn equipment for awhile.

Sounds like Mike is a member of the “reverse jinx club”. I did the same thing a few years ago. We bought two old-school snowmobiles and we had two back-to-back bad snow seasons.

That’s going to do it for me today. If you want to email me your thoughts, do so at: [email protected]

Previous Post
Cold Air and Some SNOW Returns to the Ski Resort Mountains! There are Plenty of Slopes Open!
Next Post
NOT GOING DOWN WITHOUT A FIGHT