NOT GOING DOWN WITHOUT A FIGHT 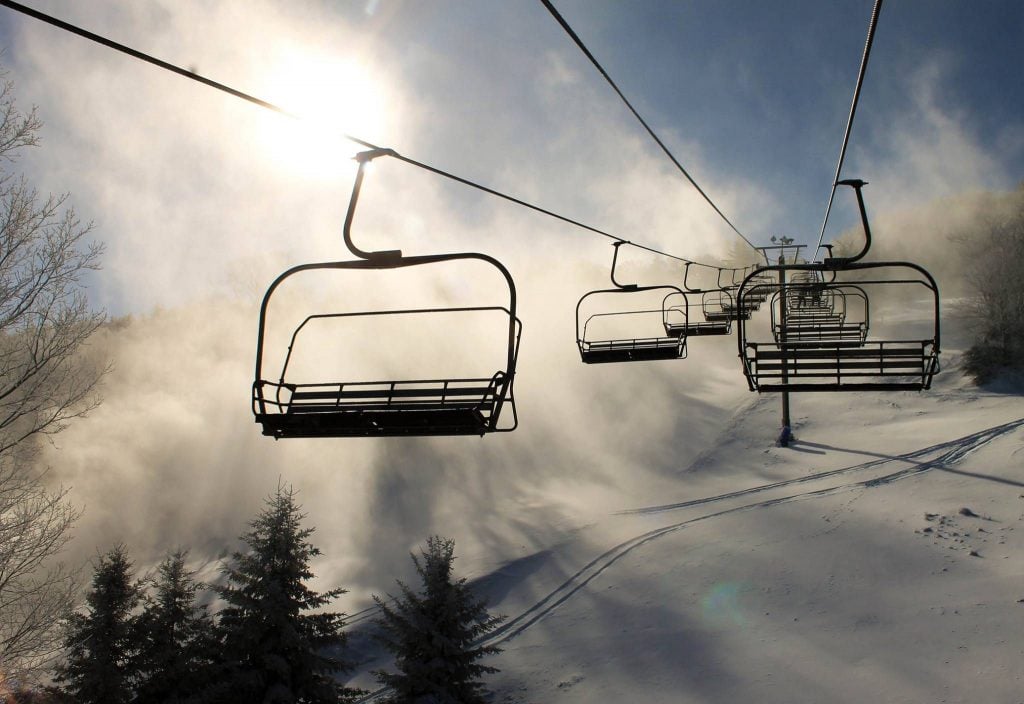 A few weeks ago, I got a text from an industry official stating, “I hate this weather,” his way of describing the thaw that hit the southeast region last month.  Always being an optimist, I pointed to the upcoming cold temperatures that would again allow his snowmakers to cover the resort’s slopes. Well as everyone knows, that cold weather (thank goodness) came and went.  Now most resorts are just hanging on, doing their best to keep the slopes covered, to provide some last-minute fun for skiers and snowboarders. 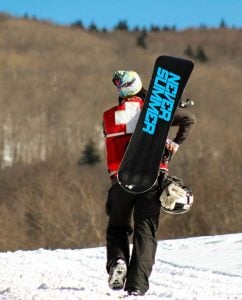 A Canaan Valley Resort ski patroller expressing the sentiment of all of us! Click to Enlarge as needed (to read the bottom of his snowboard!)

As I write this edition of my column and after a quick check of the various snow reports from resorts throughout the region, I am again reminded just how determined all of the operators are, when dealing with a bit of adversity.  Let’s go back to that cold snap that occurred after the thaw for a moment.  If you were checking out the various resort cams, you would’ve seen the operation folks not only covering the slopes, but creating piles of snow or stockpiling the white stuff for future use.  Well I am here to tell you the future is here.

The only reason there is still skiing and snowboarding available in the southeast region from North Carolina to Maryland is due to the forward thinking of all of the mountain ops staffs.  Piles of snow were made at strategic spots around the slopes and trails, knowing that the weather was going to go south on the industry and every manmade flake was going to be needed to allow skiers and snowboarders to be on the slopes in March.  Well as the calendar flips from February to March it looks like that is going to happen for the majority of the resorts in the region.

I am going to be honest, any skier or snowboarder headed to their favorite resort right now needs to understand that the conditions could be better, but then again, the conditions could be a lot, and I mean a lot, worse if it wasn’t for that fact of the aforementioned forward thinking by the mountain op staffs.  Those piles of snow are now being spread across the slopes and trails, keeping several them open, when without that forward thinking they probably would be closed at this point.  If you haven’t noticed, it has been warm (gosh I hate that word) out there and the last time I checked with my 12-year old meteorologist son, frozen water (snow) tends to melt at temperatures in the 70’s.  I just realized, I don’t think I have ever mentioned temperatures in the 70’s during the month of February in the 30 plus years in this crazy industry.  It probably has happened and I’ll just let those brain cells stay dormant.

Now back to checking out the snow reports – it looks like the snow guns were on in North Carolina, Virginia, West Virginia and Maryland as snowmakers took advantage of about 36-hours of snowmaking temperatures.  Those guns probably continued every second possible as it may be the last chance to do so for some resorts.  The snowmakers have been knocked down a number of times this season and every time they have picked themselves off the canvas (slopes) and started swinging again.

Again, I want to remind everyone just how much money the region’s resorts have put into their respective snowmaking operations.  You can easily put that total into the tens of millions of dollars and because of that huge investment, skiers and snowboarders are still out on the slopes as I currently write this week’s column.  It just amazes me what can be done in a very short time period by all of the resorts when it comes to producing snow for everyone to enjoy.  Looking at the resort cams Sunday (2/26) morning and seeing the snowguns operating put a happy chill up my back.  From a somewhat bleak picture on Saturday to things all white and nice again less than 24 hours later, it just shows you what the snowmakers can do when given the opportunity.  Just let me say they didn’t waste anything on this chance to put the white stuff down.

As Mike Doble has mentioned in an earlier First Trax column, yours truly will be joining everyone at this year’s Skisoutheast.com’s Ski Summit at Snowshoe Mountain, March 3 – 5.  Along with getting to see a number of old friends and meet some new ones, it is going to be the first time on the slopes of Snowshoe and Silver Creek for my son, Christian.  Ever since we figured out a way to attend this year’s gathering, he has been mapping out what trails he wants to explore.  If you are planning to join Mike and his merry snow lovers for this year’s Summit and get a chance to meet Christian, please wish him a happy birthday as he turns 13 on Monday the sixth.  The jury has been out on him making it to that birthday lately, but it looks like he is going to cross the teenager finish line.

Most importantly about this year’s Summit, it actually looks like Mother Nature is going to bless everyone with seasonable conditions and we may even see some natural snow. Do you remember, that’s the white stuff that falls from the skies without any help from the mountain operation folks.  If you are a faithful reader of this column, you know what I think of weather forecasts outside of a 48-hour window, I don’t put a lot of faith in them.  But in this case, I am going with that half-glass full philosophy once again and predict an epic weekend on the slopes at Snowshoe for the Summit.

Finally, this week, I once again say thanks again to the “Rocky’s” of the southeast ski industry, you continue not to take the 2016-17 season lying on your back and you are not going out without putting up a good fight.

That’s it for this week, hope to see a bunch of you at Snowshoe for Mike’s annual gathering, it will be a pile, snow pile of course, of fun. Just remember whether it be cold or whether it be hot, we’ll weather the weather, whatever the weather will be.  Think about it! See you on the slopes.

Previous Post
Some Light Snow Fell and Most Ski Resorts Made Snow!
Next Post
Wisp Resort Calls it Quits for Skiing, Tubing and Ice Skating for the 16-17 Season.