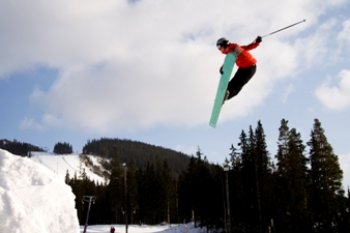 I’ve heard it all. Many have written me about how Southern skiers have to be among the best skiers anywhere BECAUSE if you can ski some of the conditions we get around here…you can ski anywhere. That’s somewhat true. We may see a bit more ice than say Colorado…but if you ski enough, you’re going to experience some conditions NO MATTER WHERE YOU SKI that will challenge you.

Every skier lives for the day that they awake to look out the window to see a 24 inch deep blanket of the most perfect powder snow. But this condition is rare unless you happen to be in a few geographically blessed areas of the planet where the conditions are perfect.

Snow is very dynamic. It changes throughout the day. It’s structure changes over time. It actually "flows" and moves down the slope. The well rounded skier encounters most of these conditions throughout the skiing season. Let’s look at the various conditions, their effect on you, and what you have to do about it.

Hard Crust: There’s not a whole lot you can do to ski hard crust well. It grabs onto your skis and prevents you for accomplishing anything other than skiing in remarkably straight lines – not a good thing if you are about to ski off a cliff. (Unless you’re going to sacrifice yourself in hopes of having the cliff named after you! ).

Hard crust can be formed when freezing rain falls on top of soft snow. It can also be formed by high wind which seems to cause the snow crystals to cement together and form a matrix. 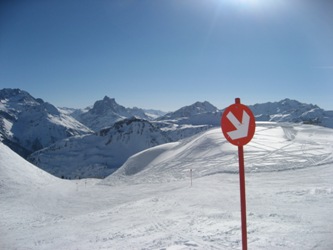 The main problem is that you cannot initiate any turns. Your skis will have created a slot in the crust and will follow that slot in a straight line. Unless the crust is thin, no amount of edging will turn the skis. When going fast, there’s only one solution. You have to jump up out of your tracks and turn in mid-air. (Not for the inexperienced skier… Solution: Stay away from hard crust which is more likely to be on black diamond runs, up top where the groomers rarely go!)

Crud: The term crud refers to broken crust. Depending on how icy the snow is and how big the pieces are, crud skiing can range from easy to just plain dangerous. If the pieces are large and perhaps frozen in place, your skis are going to have an awful time in any turns. Hop turns are a must here, too.

1. Traverse the hill to gain some momentum. Keep your skis parallel.
2. Anticipate your turn. Face directly down the fall line.
3. Set your edges and sink with your knees.
4. Plant your downhill pole.
5. Extend your legs launching yourself into the air.
6. Suck up your legs so that they clear the snow.
7. Pivot your lower body around. Keep facing downhill.
8. Land with your skis parallel and traverse to you next hop.

You will need strong legs when skiing crud. Your legs need the strength to withstand the punishing hammering received as you bash into the snow lumps.

Slush: Slush isn’t too difficult to ski in. You do have to force your turns though as the snow is sticky and heavy. Slush conditions often mean varying conditions all throughout a ski run. It’s best to keep your knees flexed and ready for changes.

Ice: Many skiers hate ice. Actually, ice isn’t all that difficult. What most skiers hate about it is the apparent lack of control. It’s almost as though the sound of one’s edges scraping across the ice sheet elicits a fear response. The natural response seems to be to hunker down low and assume an awkward pigeon-toed snow-plow position. This is hardly a posture suited to strength and control.

You will have some reduced control on ice. That’s natural since your skis cannot sink into the ice like they do on a soft bed of snow. Your skis will skid around more than usual and you won’t have the same fine control you’d normally expect. If you learn to accept the diminished control when on ice and learn what you can’t and can do. The best way to do that is to SKI ON ICE some. After a little while you’ll find that it’s not THAT bad!

Powder: Powder is a WONDERFUL ski condition. However, sometimes there CAN be too much powder. Here around the High Country, we only see powder conditions once or twice a season. Deep powder is when you’re skiing IN the snow, not on it and those are rarer still in the Southeast and Mid Atlantic.

But for those of us skiing in more normal conditions, our powder is more fluffed up new, natural snow. And it’s not that easy to ski in. It’s sluggish. It doesn’t move too easily. And if it’s deep it’s tough work.

The trick to skiing this stuff is to get forward on your skis while initiating the turn then rock back to get your skis to come to the surface. I know some people who claim you don’t have to get your weight back…but do what’s comfortable for you!