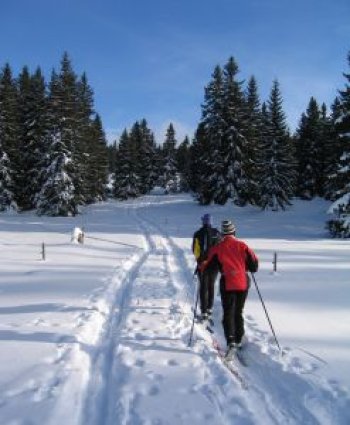 You’re probably now saying to yourself, "There’s actually etiquette on the slopes!?!" Yes there is and it would be a wonderful thing if more people would abide by them. I could really comic-up this part of the lesson if we included things like:

1. No use of camouflage on the slopes.
2. Don’t ski from the top until you learn to turn. Simply aiming down a hill isn’t skiing!
3. No passing of bodily gases while standing in a lift line.

…and while these things SHOULD be part of skiing etiquette, that’s not what we are covering in this lesson.

Although Snowboarding and/or Skiing can be pretty individual sports, you need to remember that in most occasions you will be sharing the slopes with more than a few people. This is more true on busy or Holiday weekends. To avoid injuries some common rules should be adhered to. This kind of goes to Knowing the Responsibility Code in Lesson Three.

However some bear repeating and some have been added here:

1. Ski or Snowboard under control and make sure you have enough control to be able to stop or avoid objects at will when needed. You can push your boundaries, but know your limits! That means those of you who seem bent on making yourself a human missile!

2. If you are overtaking another skier or snowboarder, it is your responsibility to avoid hitting the slower people ahead of you. Take any abrupt movement of slower going people into account and make sure you have a clear picture of your surrounding skiers or riders at all times. This is kind of like defensive driving techniques. There is no room for ROAD RAGE on the slopes!

3. Do not stop, sit down or rest in the middle of the trail. If you DO stop to rest or adjust your equipment make sure you are out of the general traffic and that other people can clearly see you. That also means YOU TO SNOWBOARDERS!

4. When you are starting your run, give way to other skiers and snowboarders. This is especially important when you are merging into trails with others entering from over and/or behind you. The only time that I have been hurt on a slope was when I entered a merged area and didn’t consider that a skier was coming down HIS part of the trail as fast as I was. Needless to say, we met and I was introduced to the medical staff, who politely stitched up my arm.

5. Always use Supporting Gear that will prevent your gear from sliding down the slope and potentially hitting other people. Skis used to have support straps much like most snowboarders use now. This is not so common on skies these days. However, poles DO have straps on them and it’s a good idea to actually use them. The straps that is!

6. Follow all Snow Resort Signs and do not enter closed trails. While "poaching" off trail is fun and a little exciting, it MAY result in getting your lift pass pulled by ski patrol!

7. If you are in any way involved in an accident, stay on the accident scene and offer any assistance. Report the accident to the patrol of the resort. I’ve seen people wallop skiers or snowboarders and simply continue on. That’s not only not cool, it is just as much against the law as leaving the scene of an accident in your car. If you hit someone…make sure they are okay before continuing on.

In closing, it WOULD BE COOL if part of skiing etiquette also included no use of camo, hunting outfits, construction ORANGE overalls, etc. However that IS part of skiing in the South I suppose!

Previous Post
Lesson Seven: Proper Weight Distribution
Next Post
Lesson Five: Getting On and Off the Lift