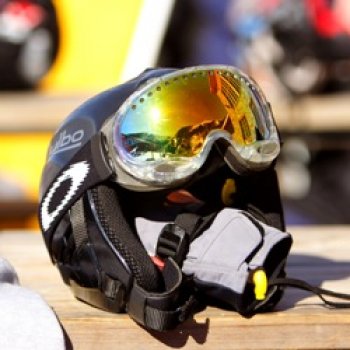 Hey a helmet is a GREAT way to promote your favorite website, drink…etc!>>

I am often asked whether or not parents should put a helmet on their child. I began skiing way back before anyone other than ski racers wore helmets. I often thought that wearing a helmet looked dorky or that it looked like it took a lot of the fun out of skiing. If you’ll look around you when you’re at your favorite resort…most of the really good skiers and riders are wearing a helmet these days. If I’m skiing on a busy day or in icy terrain I have begun to wear one. If it’s not so busy I don’t. Truthfully that’s pretty stupid, but that’s me. My brother-in-law is a bit smarter. His two sons began to ski pretty fast, so he figured he’s put a helmet on them. After requiring them to wear one he figured it was only fair that he should. So he wears one all the time. Some people look cooler than others wearing them. Frankly I have a big head which is somewhat accentuated by the wearing of a helmet! However, writing this article has made me commit that I will wear one at all times this season and I’ll just slap some cooler stickers on it this year. Maybe THAT will make me look cooler!

<<<My daughter looks so much cooler than I do wearing MY HELMET!!

All joking aside…wearing a helmet is a good idea. In addition to protecting your brain, it does keep you warmer during especially cold days. Okay there are many more credible reasons and I could write some morbid stories of how some of our local, PHENOMENAL skiers met with death due to accidents that they might have avoided had they been wearing a helmet. However, again we bow to the expertise of a medical practitioner. 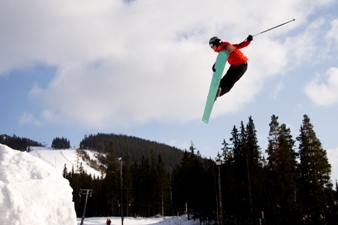 To Wear or Not to Wear? A Parent’s Decision Regarding Winter Sports Helmet Use
By Michael P. Pietrzak, MD, FACEP

During my time as an emergency medicine physician at various ski areas in the Rockies, I heard numerous questions on a daily basis from concerned parents and other adults, illustrating the confusion surrounding helmet use. Are helmets really helpful? As a parent, what should I do?

Any parent knows that life with children is often a series of informed and thoughtful decisions, mixed with some that are instinctual as well. Whether or not to put a lid on your kids while they’re on the slopes is no different; but knowing the facts can often ease the decision process.

The issues surrounding helmet use in winter sports are complex. Some experts say wearing a helmet is a number one priority. Some say to leave it up to choice. Some say to wear a helmet, but make education the first priority. Even some experts say it’s not necessary to wear one at all…. Experts can easily find data supporting what seems to be rational, sound logic for their opinions and their positions. Because there is currently no legislation regulating mandatory helmet use in skiing or snowboarding, individual choice is the final determination, or in the case of children, parents and caretakers will make the ultimate decision.

Background
Sports in general are replete with historical struggles over the use of protective equipment. American football was nearly outlawed by President Theodore Roosevelt until the use of helmets was initiated. Hockey players required years of protest and pressure before helmet use was accepted. Yet today, imagining these professional sports without the use of helmets seems far-fetched.

Recreational activities have traditionally been slightly less controlled than organized sports; however over the years, we have seen an evolution in society’s approach to recreational sports safety. There was once a time when wearing life jackets while water-skiing was thought of as unnecessary and confining. One would find it silly not to wear one today. Additionally, during the past two decades the use of bicycle helmets has dramatically increased—it could almost be deemed the norm, even in locations without legislation. No doubt the same perception and behavior evolution will occur in downhill winter sports.

Where the Risk Lies
Winter sports, especially skiing and snowboarding, provide among the most pleasurable and exciting recreational experiences for youth today. In addition to being a purely recreational experience, winter sports provide excellent physical exercise, an appreciation for the environment and an activity that can be done as a whole family. Few other recreational activities can provide all these advantages at once. However, when combined with such factors as speed, slope and varying terrain, as well as weather conditions, an inherent risk for injury exists.

Any activity that involves motion has some risk for injury due to mechanical forces. Skiing and snowboarding are no exceptions. Estimates indicate that there is one medically significant injury for every 400 skier-days. While this number catches one’s attention, it compares favorably with other recreational sports such as scuba diving and cycling. Brain injury makes up less than 2 to 8 percent of reported injuries on the slopes, varying slightly depending on the conditions and demographics of the ski area. Why is so much attention focused on an injury representing such a small percentage of all ski injuries? After all, even most of the reported brain injuries are “just” concussions, with a high rate of recovery and no long-term effects, right? The concern, however, is that brain injuries account for a larger percentage of the most serious ski injuries and what we always referred to as “just” a concussion may actually be more medically significant than previously thought.

The ski industry and equipment manufacturers have long recognized the need for safety on the slopes and for specialty gear that can help prevent injuries. Ski equipment began developing early with releasable bindings and safety straps. Later supportive boots and ski brakes were introduced. All these equipment features help to reduce the potential for injury. Manufacturers continue to enhance the technology to improve safety as well as the overall recreational experience. Ski racers were the first to widely use helmets on the slopes. Gradually, the use of protective headgear is gaining popularity among the mainstream of skiers and snowboarders.

Bogus or Bonafide?
In skiing and snowboarding brain injuries occur due to the transfer of biomechanical energy to the head during falls and collisions with “surfaces” such as snow, rocks, trees, man-made objects or other skiers. The type and seriousness of the injury is dependent on many factors including the force of the impact, the angle of the impact in relation to the head and the protective features in place. The question that is often asked is “Will a helmet really protect me (or my children) during collisions?”

Many studies have been done and articles written on the limitations of helmets. These studies have shown that helmets provide little protection from direct blows above 12 mph. However, direct 12 mph blows to the head in winter sports are rare. The vast majority of falls involve glancing blows during which the skier or snowboarder may be moving faster than 12 mph, but during the fall the head glances off a surface. Collisions with trees and other upright stationary objects, on the other hand, are much different, as direct blows with full absorption of the force to the head is more likely. However, even in these cases, the shape of a helmet and its hard surface make it more likely that glancing blow will occur, not a direct blow.

Some have argued that if youth participating in winter sports wear helmets, they will assume greater risks because they may feel invincible. In fact, some recent studies demonstrate that with increased use of safety equipment comes an increased risk of injuries. One shouldn’t interpret this as an excuse to not wear a helmet. Rather, it emphasizes that one’s behavior is the number one protection against an accident, even while wearing a helmet. In other words, one should both ski responsibly and wear a helmet.

The Bottom Line
Helmets do provide significant protection. They dramatically reduce forces applied to the skull and the brain and thus reduce the potential for injuries. The outer shell of a helmet protects against penetration while the inner energy-absorbing liners reduce the forces that are transferred to the head. New materials, with even more energy absorption characteristics, are being developed and these promise even more protection. The various sizes, shapes, weights and materials now available provide many options for fit, comfort and appearance, especially when children are considered. Key to helmet selection is finding one that fits and is comfortable. A poor fitting helmet does not protect well and an uncomfortable helmet will not be worn.

Further, the ongoing study of helmet shapes will improve the ability of the helmet to deflect energy as well as to absorb it. Improved helmet design has increased not only comfort, but also their usability in various temperature conditions. For me, as well as for a growing number of individuals, the use of a helmet actually makes skiing and snowboarding a more comfortable and enjoyable experience.

Children often view the world as a challenge. While some are extremely timid on the slopes, many others believe faster is “better.” Judgment is not always part of their decision process. As a parent, one desires to allow children to enjoy recreation to the fullest and develop confidence in their own abilities and skills. Parents have a responsibility to educate their kids on responsible behavior, but are not always in the position to supervise their children in the sport. Given the winter sports environment and the nature of children to have fun, ensuring a reasonable amount of protection makes good sense. The use of helmets is a step in the right direction – they offer that extra degree of protection your family deserves.

Finally, considering all aspects, the first and foremost element to prevent brain injuries in winter sports is not protective equipment, but rather safe skiing and skiing and boarding practices. Education on slope safety is key and—parents can play an important role in it as well as resorts. Snowboarding and skiing under control, not exceeding one’s abilities and being aware and courteous of others on the slopes will prevent more injuries than any safety equipment ever could. The judgment required for safety is developed through experience based on proper guidance and instruction. Skiing and snowboarding safety follows the same pattern.

Previous Post
Lesson Five: Getting On and Off the Lift
Next Post
Lesson Three: Knowing Your Signs