It is THAT TIME again. February 1st is the day before Groundhog Day or Groundhog Day Eve for those REALLY into it. It’s that time of year when thousands of revelers converge on the small Pennsylvania town of Punxsutawney to hear an overweight groundhog named Punxsutawney Phil predict the weather. Regardless of whether or not you believe there’s any validity to his forecasting, he IS the world’s most eccentric weather forecasting system. Tens of thousands will be on hand to pass the word to the rest of us (perhaps millions) who will be waiting with baited breath on whether or not we’ll have another six weeks of winter or an early Spring.

Skiers and Snowboarders everywhere are hoping for the additional weeks on the snow, while most of America will be hoping that he doesn’t see his shadow and predicts an early date with their local tennis courts, swimming pools or golf courses.  With a HISTORIC STORM affecting two-thirds of the nation today and tomorrow…much of the U.S. is hoping for an early Spring. (It ain’t happening!)

I had the opportunity to interview Tom Chapin last year. He’s the editor of the Punxsutawney Spirit newspaper and he told me, "Groundhog Day is a lot like a rock concert but the people are better behaved and there’s a groundhog involved!"

I knew that tons of people attended the event. I’ve seen the movie so I kind of knew that the town comes alive perhaps like Banner Elk’s Woolly Worm Festival on steroids. What I didn’t know that Tom shared with me was that there is music and entertainment, spoofs of game shows and people shooting t-shirts and stuffed toys into the crowd ala the way they do it at football games, etc. 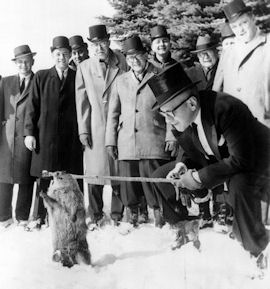 This photograph from Bettman/Corbis (with permission from National Geographic) shows the famous rodent making a prediction of six more weeks of winter in 1963. Notice the shadow.

The Groundhog Day ceremony originated shortly around 1887, when a group of groundhog hunters from Punxsutawney dubbed themselves the Punxsutawney Groundhog Club and declared their adopted rodent, Punxsutawney Phil, the one and only "official" weather prognosticating groundhog.

According to Punxsutawney folklore, Phil owes his 124-year-plus lifespan to an "elixir of life," served every summer at the annual Groundhog Picnic, of which there are curiously no photographs.

PHIL COULD BECOME NOTHING MORE THAN FLUFF IN THE FUTURE?!?!?

I couldn’t help myself. As I started writing this story to honor Groundhog Day Eve (yes, count me as one INTO the festivities) I thought that it might be cool to actually Google some date-specific stories about Global Warming, Climate Change or Global Climate Disruption. I have to admit that my research was prompted by one of our readers who emailed me about how arrogant I am for posting MY VIEWS as to the subject. Somehow it isn’t my business to talk about the weather on a weather-related website. Somehow it is political if I write about my take on things, but not political if you write content in support of it.

I’ve been there – done that so I won’t bother today.

What I found though was surprising and pretty funny to say the least. In a story posted in the National Geographic News on October 17, 2005 "experts" wrote that we’d be winterless in a hundred years and that summers would be continually hotter with summers lasting longer and being consistently as hot as the hottest two weeks of what we currently experience – all summer long in the future.

That’s GREAT news for me as I really enjoy those hot days at the lake. Okay I may not be around in a 100 years (but I might), but the good news according to this 2005 story was that according to those experts, "Warming Has Started".

Let’s fast forward a few years to TODAY where I just read that 2010 was one of the coldest on record in MANY locations of the world. Russia may be experiencing their coldest winter in 1000 years. Several meteorologists are talking about this winter being among the coldest in the last 100 years and last night I heard one weather guy state that it could go down as the coldest – not only on record, but EVER.

What I find fascinating is that despite finding countless locations around the world where the last couple of winters are among the coldest ever, "the world’s temperature still went up".

Here are some headlines pulled right from Newspapers around the world…

Last October Polish meteorologists said that this winter may become the coldest in Europe – unbelievably! – in one thousand years!

AGW in tatters as Siberia endures its coldest winter EVER.

Coldest winter for 30 years in the UK with the longest sustained cold spell since 1981.

Spain shivers in coldest winter for a decade.

Australians shiver through coldest winter morning in 30 years …Jun 30, 2010 … Sydney was blanketed in frost on Wednesday as the city shivered through the coldest June morning in nearly 30 years.

There are tons of these and just a couple of years ago news stories circulated about how Afghanistan’s coldest winter killed over 900 people.

So where’s all of this heat!

SO PHIL, JUST CHILL AND DO YOUR THING!

I think Phil’s safe for another few hundred years or so. I’ll check back in on him in a hundred years or so and see how he’s doing 😉 If it’s okay for people who have no clue about next week’s weather to tell us that we’ll be melting in a hundred years – then it is okay for me (who ALSO has no clue) to write that we’ll all be just fine, thank you very much. The difference is that I can admit that I have no clue. Supposedly though, according to some who are so much smarter than I am, I can "learn something" by reading accounts that want to tell me that we’re all m-e-l-t-i-n-g!

I went on record YESTERDAY that Punxsutawney Phil will emerge from his simulated tree stump and see his shadow, predicting six more weeks of winter for the United States. Last year he did that and then somehow got his grubby little paws on a cell phone and texted that message to millions around the world. Don’t tell ME you can’t teach an old Groundhog new tricks!

The "take is on" and unless someone offers Phil’s handlers a whole lot more than the $2.25 that I did, he’ll be predicting six more weeks of winter tomorrow morning.

I’m predicting the next hundred winters will be cold and snowy with some periodic mild ones here and there.