It Is What it Is… 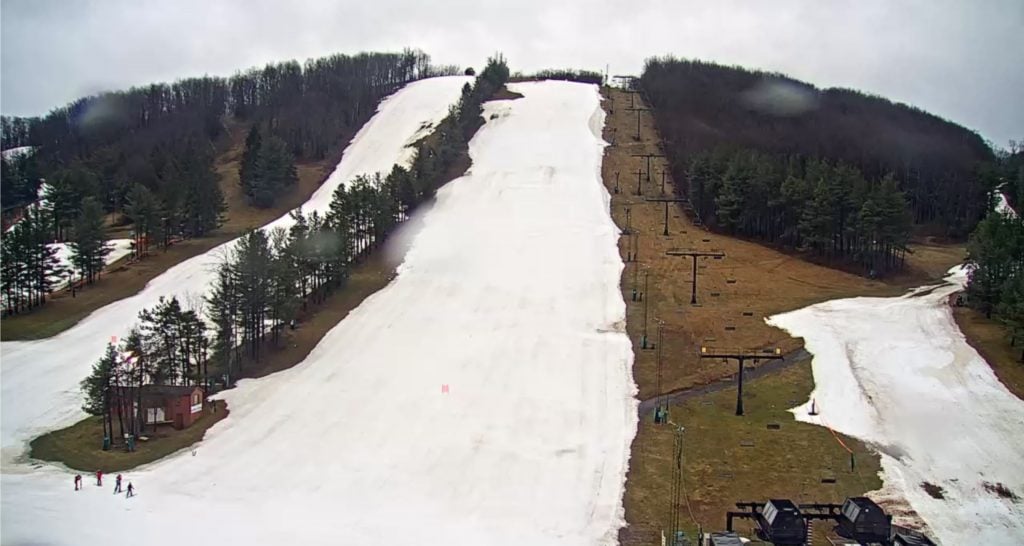 It looks like this season is going to be one of those, “It started so well, what the heck happened” seasons. I mean we went from wearing three layers on the slopes to wearing just enough to protect yourself from getting too wet. In a very short period of time, the slopes throughout the region went from packed powder surfaces to wet snow or loose granular.

What’s the old expression, “You can’t put lipstick on a pig”? Well folks that is just about where we are right now as it pertains to the slope conditions at all of the resorts. This is not an isolated thing right now and there is no hiding it. After a couple of weeks of warm temperatures, gosh I hate that word during this time of year, and almost daily rain, many slopes have returned to where they started from and that’s the snowmaking ponds and lakes.

Many in the industry have labeled me through my 30-plus years as a spin master, always finding the silver lining no matter what. Well, as I sit here and write this week’s column, I have to admit, after looking at the various resort web cams, the spin has spun out. Yes, there are some overnight temperatures dropping into the upper 20’s the next few nights in a couple of areas, but being realistic, it’s coming way too late for the majority of the resorts in the region. Understand, I am not talking about too late for snowmaking, I am just talking about being able to move some snow and patch thin and bare areas to make it down the mountain.

There are a couple of resorts in our region doing their utmost best to hang on at least through the first weekend of March. A few are suspending on-slope operations for the first couple days of this week, in order to save the snow they still have and provide a skiing and snowboard product for what is going to be the last weekend of the season for most resorts. It might not sound pretty, but here’s to those operational staffs that understand, what has to be done, needs to be done, and that includes shutting the slopes down for a couple of days.

You have read in this column and other places on skisoutheast.com that there are three very important business periods for every resort in the region, the three-week Christmas holiday, Martin Luther King and President’s weekends. Thank goodness for some natural snowfall during the latter holiday, because it looks like all three periods were successful for most resorts this year, which is probably going to be the saving grace for those resorts.

I mean it’s not like the resorts didn’t squeak out every minute of snowmaking they could when Mother Nature allowed them to do so. I know of a number of resorts which actually went past their stop snowmaking date to try and provide the product that every skier and snowboarder expects from resorts in the southeast region. What I am talking about is that those resorts who made some overtime snow, had to reach into their piggy banks and spend some coin that they weren’t scheduled to do so this season. In my book, that’s going a bit above and beyond the call of duty. I know there may be some out there saying, well when you charge what you do for a lift ticket, they better make snow when they can. Okay, I get that, but there are also times when, the plug is just pulled, but in most cases this time, that wasn’t the case.

Now, trying to have that half-glass full approach about the upcoming weekend for the resorts that are going to be open. The weather forecast has the temperatures a bit closer to this time of the year’s normal range. What I am seeing is overnight temperatures in the 20’s, which means that there will be grooming or in a number of cases, snow farming taking place at those open resorts. I also wouldn’t be surprised if you might hear a snowgun or two operating, just to patch a few things up, here and there.

Let me be clear here, I am not saying the conditions are going to turn around overnight and all the trails open will have side to side coverage. There is no way that is going to happen, however, I am here to say the surface that everyone will be playing on will be firm and groomed. That means if you can get out there one more time, the conditions will be about where they were when we started the 2017 – 2018 season. If you want to make those final turns of the season, I would say go for it, you won’t be disappointed.

Let’s talk about those final turns of the season for a moment. The annual Skisoutheast.com Snow Summit is set for the upcoming weekend at Snowshoe Mountain Resort. Again this year, Mike, Kenny and the rest of the staff and going to throw it down, on and off the slopes. This is your chance to ski and ride with some of us that you read every day on the website and also make turns with folks that just like to make new friends in the sport. I am planning, along with my son Christian to make the trek again this year. I am hoping my back will be mended enough to put the board on the snow and make a few turns with everyone. The jury is still out on that one though. None the less all of the information about the event can be found at skisoutheast.com. I hope to see some of you over the weekend.

That’s it for this week’s column, hopefully there will more to come as the season unfortunately melts away. Just remember whether it be cold or whether it be warm, we’ll weather the weather, whatever the weather will be. Think about it! See you on the slopes.