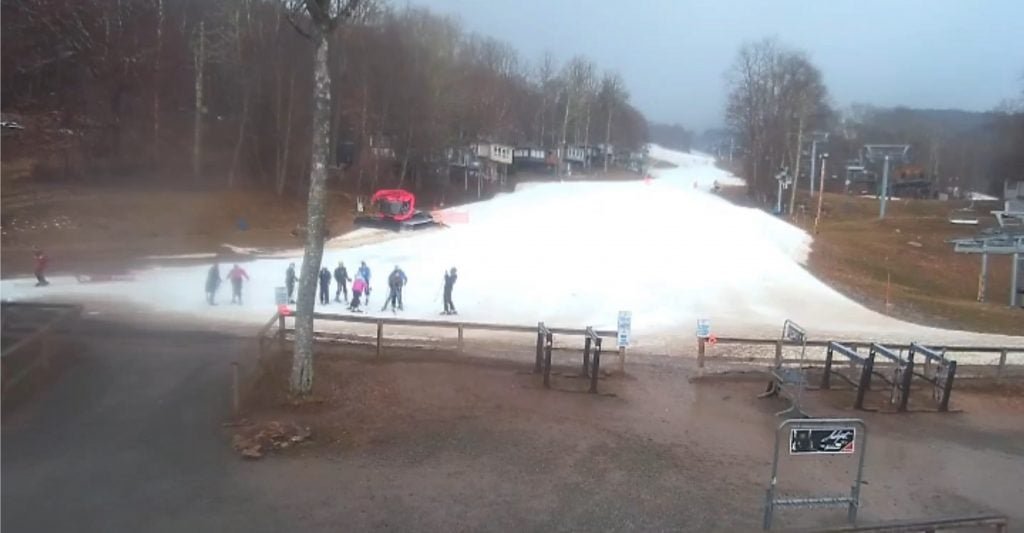 Those are comments that have been related to me over the past few days. Longtime fans of several mountains emailed or texted me with comments like, “XYZ Resort is Toast” and even the most positive of fans remarked about wanting to find any of the three rodents that forecasted six more weeks of winter on February 2nd.

I remember a season similar to this when things were rolling along great until the flip just switched to “OFF” on Groundhog Day and it seems that we might have a repeat scenario.

Even so, I can’t remember another season when on February 24th I have to report that FOUR ski areas have already closed for the season. Those are:

Beech Mountain Resort is calling it quits after today.
The Homestead Resort is ceasing ski ops after Sunday’s sessions.

Massanutten Resort is looking at things “day to day”.

Weeelllll… it doesn’t look great, let’s put it that way. I took a look at the long range forecast through my own amateur eyes and I’m only seeing MAYBE three nights between now and March 7th where there MIGHT be some opportunities to make snow and that was looking at Snowshoe’s forecast. Looking further southward into the North Carolina mountains revealed NO snowmaking temps from now through March 10th.

Hence, the decision to CLOSE FOR THE SEASON on the part of those ski areas who have already done so.

Meteorologist Brad Panovich posted his latest Skier’s Forecast Video and he seems to be holding out some hope for perhaps a bit of a snow storm that might get into the WV and Maryland ski areas beginning Friday of next week. Check that out below:

Mixed Approaches to the rest of the season…

As I looked around at the area’s slopes this morning it was interesting to see how some resorts have simply said “we’re done” and others are taking a “wait and see” approach and still others have not given up on making snow even a week or so from now if the weather provides that opportunity.

Here were some notable comments:

Yes, today and Sunday we have switched to weekday rates and our plan is to sustain to daily operations as long as we can and then resume snowmaking as quickly as we can, if we get an opportunity for a couple days of solid cold weather. If you have purchased your tickets on line and have questions, please email us at [email protected] and we can respond with information on what you need to do. Like we said yesterday, it may not be pretty or what we expected for 3rd week of February but we are doing our best to provide a good experience and stay open and folks are still having fun, that’s what its about.

Please don’t judge us or any other area on what we look like at this time. Yes, its muddy and messy, but as most of you know this is typically not the case. And we are open for skiing and riding today. We all have invested considerable energies into advanced snowmaking technologies and have some of the best snowmaking teams in the country working for us. This season we have had more snow on the hill at times than we have ever seen and less than two weeks ago, open on all trails. But warm rain, above average temps, warm winds and fog and no snowmaking which are all anomalies for this part of February, its a been a challenge.

It’s not pretty, but it’s still skiing really good. We do expect some wet weather to be moving through today, so be sure to gear up appropriately. The title of Fastest Snowboarder in West Virginia is up for grabs at the Berming Man Banked Slalom this afternoon on Spruce. Please ski with care as trail coverage may vary and some bare spots are present. The Ridiculous Pass will be on sale March 6 – 15. Get access for the rest of this season and all of next season as well, for just $229!

A week ago today I reported the huge drops in base depths across some of the ski areas that had taken place due to the drenching rains and mild temps from the previous week. This past seven days was much less rain-drenched, however the sun-drenched slopes of the region have taken another beating from temperatures that have soared to as high as 70° over the last few days at some mountaintops. Check this out:

Appalachian Ski Mountain’s base depth was reported at 105″ 14 days ago on February 10th. It dropped to 66″ on February 17th and it is now at 13-29″ this morning. That is 76″ base loss in the last 14 days. That base loss can be seen atop Appalachian’s Upper Big Appal slope as it is so unusual to see that trail closed in February. App is down to 8 of 12 trails open.

Beech Mountain Resort is giving up on the season after day sessions today. Yes, you read that correctly – Beech will be closed for the season after today. One look at the LIVE base cam will attest as to WHY Beech is calling it quits. There is NO snow on the beginner terrain and a narrow slither of snow down much of the base area.

Further north Canaan Valley is boasting 17 trails open, however even their slopes are narrowing ribbons of snow.

I’ll update the list of attendees later this weekend but as far as I can tell, we have around 70-75 friends headed to Snowshoe Mountain next Friday to enjoy the snow and whatever’s left of it to play on 😉

Come join us…there might be some natural snowfall as well!