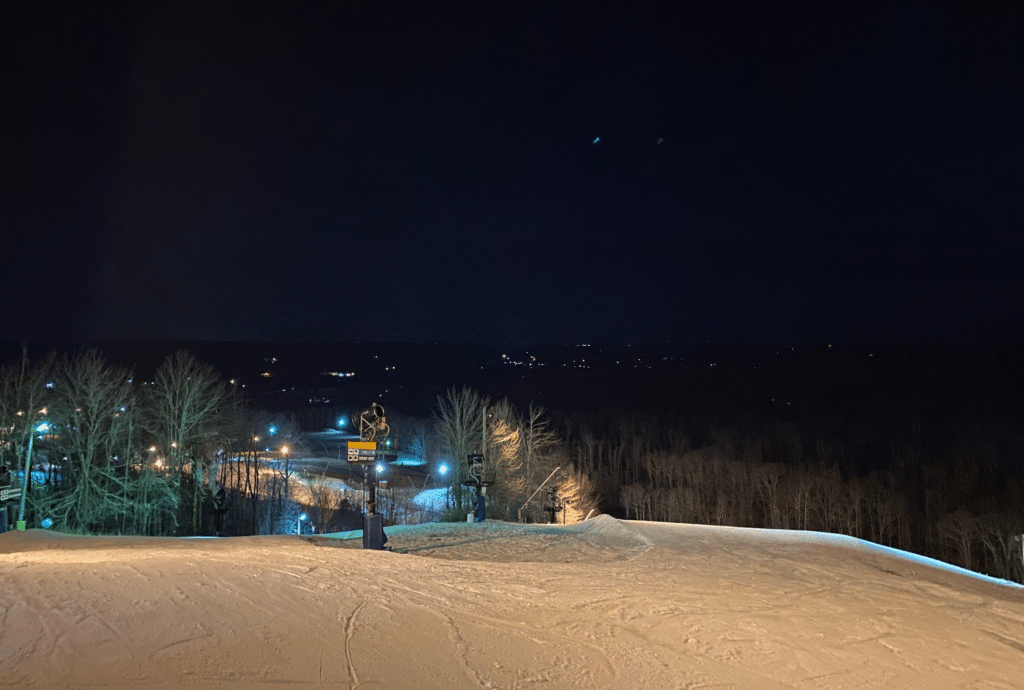 That is the question that was posed multiple times in my SkiMail inbox and via some random posts on social media. As I sit here typing up today’s post, the forecast for Wednesday is a mixed bag of weather horrors. The NC mountain ski areas are looking at highs in the mid-50s and fog, and scattered showers. The Virginia ski areas are looking at highs around 60° and as much as three quarters of an inch of rain Wednesday and Wednesday night and the West Virginia ski mountains are looking at a half-to-three-quarters of an inch of rain (later in the day) and highs in the upper 40s to near 50°.

That, my fellow skiers & snowboarders, is NOT conducive to good snow conditions. If you take one tour through the archived weather data – highs and lows – for the month of December – you really have to wonder how in the heck ANY of the ski areas have ANY snow on ANY slopes.

That brings me to share the short clip below. Since none of the ski areas have been able to MAKE SNOW, they have all had to focus on grooming and pushing snow around, just to keep some measure of slopes open and in good enough shape to play on. The clip below is from Snowshoe where these two groomers were working hard at around 10pm last night. Groomers were working the mountain ALL NIGHT and then after some light rain hit, they were at it all over again early this morning.

A SAMPLE OF THOSE EFFORTS…

Kenny Griffin just posted this nice vid of Snowshoe’s Cupp Run, top to bottom and as you’ll see, there were a few thin coverage areas along the way, but the trail looks remarkable when you factor in the terrible weather we’ve had.

Editor’s note: I can tell you that there is “thin coverage and bare spots” on every slope and trail at every ski area in the region. I previously shared that Appalachian Ski Mountain, Timberline Mountain, Beech Mountain Resort and Winterplace Resort probably have LESS in the way of thin coverage…but “everybody’s got ’em”.

The amazing efforts of the snow grooming team here at Snowshoe Mountain Resort have made it possible for me to get it 34 runs down the slopes of Snowshoe & Silver Creek over the previous three days. Kenny Griffin is right there with me, if not slightly ahead on “run count” as he did 19 turns on Tuesday alone.

I can attest that Tuesday was pretty challenging as many of the connector slopes were pretty bottlenecked with beginner skiers, making for not-so-fun weaving in and out, just to get some turns in. My first two days here allowed for some fast runs. After lunch on Tuesday, we headed over to Silver Creek and things were MUCH less crowded there.

Rain was in the forecast here at Snowshoe on Monday and Tuesday, but other than a light drizzle on a couple of occasions, it has remained dry until late in the evenings, hence all the turns!

Even as I was updating the SNOW REPORT LIVE this morning, resorts were making last-minute decisions.

While all of the ski mountains were presented with crazy weather challenges for the majority of the month of December, it is fair to say that the West Virginia mountains were provided with more snowmaking nights during the month. That allowed places like Snowshoe Mountain to open up 30+ slopes and trails, including Cupp Run. The North Carolina resorts, especially Appalachain, Beech and Sugar mountains all got 7-10 trails open. The Virginia resorts had the most challenging weather to deal with and have fought to open with 4-5 slopes.

That’s what things looked like as of December 24 +/-. Since that time, the North Carolina ski mountains have had the best weather – in terms of less rain – and perhaps the best slope conditions are at Appalachian Ski Mountain and Beech Mountain Resort. One look at the LIVE SKI CAMS will show less in the way of thin coverage at those ski areas.

For the most part, the forecasted rains that were supposed to be hitting the WV ski resorts, didn’t really hit – but there’s no question that things are looking a bit rougher in WV as the light rain and heavy skier traffic have been taking a toll.

One look around the region, via the snow reports and LIVE SKI CAMS, all of the ski areas are fighting hard to weather these next five days. Simply put, I don’t think some will make it without ceasing ski & snowboarding ops for a day or two, or three over that span of days before cold temps (and some snow) are forecasted for Sunday night as lows are FINALLY meant to nosedive into the teens and 20s.

Right now, every ski mountain, snowmaking team is looking at the afternoon and evening of Sunday, January 2nd to begin the rebuilding of slopes. Until then, man it is going to be hit and miss as to which resort(s) can make it.

I had much of this post typed up when I saw the alert come in from Wolf Ridge Resort, that they were suspending operations – so they are the first to close. You could kind of see that coming as they had only gotten opened up this week after very limited snowmaking.

Massanutten Resort will be the next to cease ski & snowboarding operations as they announced this morning that they will remain open today until 5pm and then shut the slopes down until snowmaking returns Sunday evening.

As of 9am, Cataloochee Ski Area had not updated their report. General Manager, Chris Bates was out on the groomer doing his best to provide a good experience on the hill, and he JUST updated that they will close after 5pm today and then close until making snow Sunday.

So FOUR of the SIXTEEN Southeastern ski areas are closed for today and two will close after 5pm today. Of the rest, it is AMAZING that we even have slopes open. Here is the rundown – alphabetically:

APPALACHIAN SKI MOUNTAIN – dropped one slope from 24 hours ago, but are still looking pretty good with 6 slopes open on a base of 16-30″ and they are open for day and night sessions. Little in the way of bare spots or thin coverage.

BEECH MOUNTAIN RESORT – Down 1 slope to offer 7 open for day & night sessions – Upper & Lower Shawneehaw and Upper & Lower Robbins Run are all open! They have some thin coverage areas, but look pretty decent top to bottom.

BRYCE RESORT – Call ahead as they have not updated their report in three days. Reporting 5 slopes open. 10″ average base.

CANAAN VALLEY RESORT – Still offering 6 slopes with a reported base of 24″-36″. They posted, “We will continue to keep Upper Canaan Curve, Chute, Valley Vista, and Face open on the mountain, along with Sissy Schuss and Critter Crawl open in our beginner area. This is perfect variety of early season trails to have open while also providing you with a thrilling experience of skiing at Canaan. However, these trail openings are subject to change with the unseasonably warm weather we’ve been experiencing in the valley these past few days.”

CATALOOCHEE SKI AREA – They are open with 4 slopes from the mid-station down today until 5pm and then shut down until they can make snow.

OBER GATLINBURG – They have yet to be able to open for the season. Cold weather is headed our way. Tubing is open! Ice skating, Ice Bumper Cars and More. Opening for skiing & snowboarding weather dependent.

SNOWSHOE MOUNTAIN RESORTn- 32 slopes still open. As I have shared, they have plenty of good (to sometimes great) skiable terrain, and also a LOT of thin coverage areas and bare spots (clearly marked).

Our operations team continues to work their magic overnight, moving snow around and keeping the trails in the best shape possible. We are starting to see some thin cover here and there so ski/ride with caution and pay attention to all trail markings. We are sold out of all-access lift tickets for today. Silver Creek-only tickets are still available.

SUGAR MOUNTAIN RESORT – 8 slopes, ice skating and tubing all open for day & night sessions. 15-50″ reported base and they are the only ski area emphasizing Loose Granular, Frozen Granular & Thin Areas and Bare Spots

TIMBERLINE MOUNTAIN – 14 slopes open for day sessions. They shared:
Despite this week’s rainy weather, there’s still plenty of snow coverage here at Timberline Mountain. We remain at 70% of our trails open, and we don’t expect to loose much coverage until closer to the weekend. You’ll find soft and granduler machine groomed snow on the mountain today. Don’t let the rain scare you off! Skiers and snowboarders at Timberline Mountain can expect lower than average crowds, so this is a great time to visit to avoid long lift lines in get those laps in.

WINTERGREEN RESORT – dropped two slopes and are now operating for day and night sessions on a base of 8″ average with 3 slopes available. They posted:

Our snowmaking team is ready to make high quality snow every chance they get. It currently looks like snowmaking returns on Sunday evening.

WINTERPLACE RESORT – Offering a 12″-34″ base with 13 slopes open day and night session. They posted, “Snowtubing Operations have been suspended until snowmaking temperatures return later this week. You can get updates on our website and social media for snowmaking progress. Purchase your lift tickets in advance online for the best deals, as tickets may be limited.”

The photo of the day up top is of night skiing at Winterplace Resort.