On the Struggle Bus

The final weekend of 2021 is going out with a wimper…for snow lovers at least.  Snowbirds (what a weird term to describe someone anti-snow) will be in heaven this week as unseasonable and even record high temperatures are the name of the game.  Optimists need to look ahead to next week as the new year looks to bring the return of colder temps, once we make it through this week of course.

Man, what a crummy way to end the year.  Due to the weather and just overall busy-ness of life in general, this week is the first opportunity I’ve had to snowboard this season.  In my 16 years of riding this is the first time I’ve never gotten a day in before Christmas.  Just turrible.  As luck would have it, the first time I get out to ride for the year and of course I get a week of mild, dreary weather.  Yuck.  It is what it is though and we’re making the best of it here at Snowshoe this week as everyone else should be as well.  Today at Snowshoe was less than ideal, with misty rain throughout the day but I will say rope drop was pretty fun this morning.  Here’s the video evidence.  Doble can still point it!

It was pretty socked in up here in West Virginia yesterday as there was a bunch of fog and clouds throughout the day.  Looking at the cams around midday yesterday and I was a little jealous of the resorts in North Carolina as it looked bluebird.  One thing that the entire region has in common though are ridiculously warm temperatures.  As I was reading Ray Russell’s morning report yesterday he mentioned that the LOW temperatures in the North Carolina High Country this week are going to be 10 degrees warmer than the average HIGH temperature for late December.  Whoa.  Temps today are forecasted to get into the 40’s, 50’s and even 60’s for some resorts.  The good news is that it looks like the rain is going to mostly hold off today so there’s that little silver lining.

To say this week is going to be a struggle for the ski areas in the region is an understatement.  Mother Nature hasn’t been that great to us thus far this winter and she’s just piling on now.  Christmas Day was an odd one down in Charlotte where it was 70 degrees and felt like April.  My family was shocked when I told them I was still going to Snowshoe for a week.  “Is there still snow on the mountain?” was their response.  It still never ceases to amaze me when people I know think a handful of of days of warmth will completely wipe out all the snow on the mountains around here.  I don’t think most folks realize the absurd snowmaking capability that our ski areas have and I definitely don’t think they understand that manmade snow is the primary source of snow on our mountains.  Thank a snowmaker!

So yeah, it is and will continue to be a rough week.  Less than ideal you could say.  There’s still a ton of fun to be had on the mountain though and it really does come down to your mindset.  I was able to introduce one of my co-workers to the Western Territory today.  He was stoked and so was I! 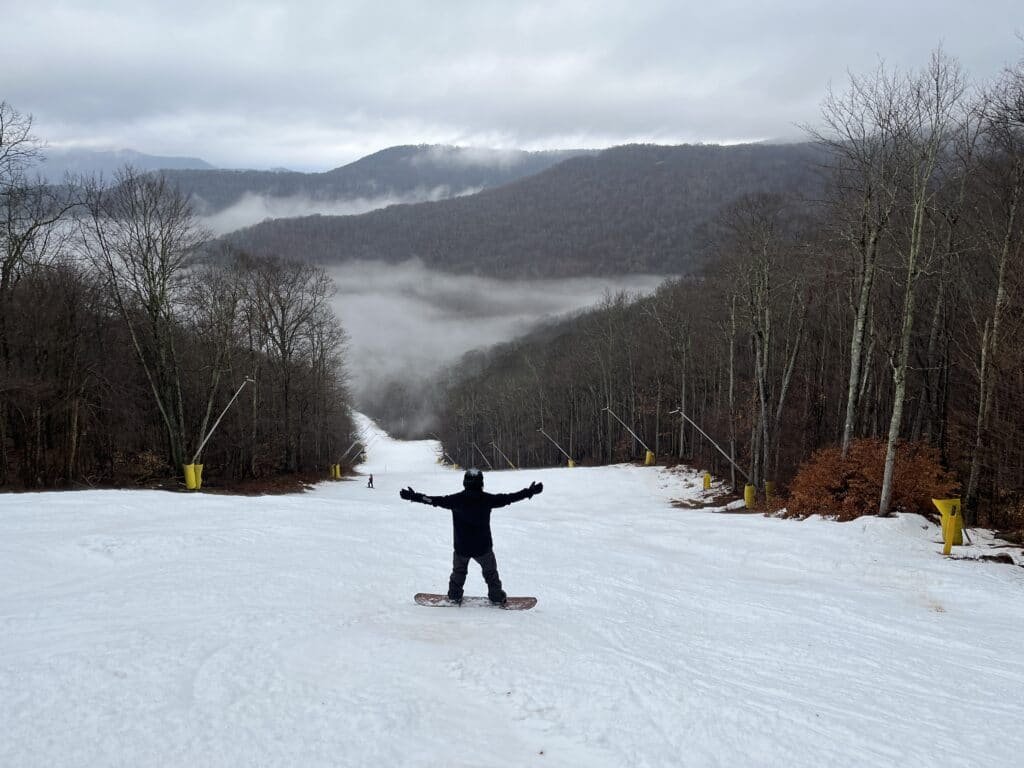 As a weather geek, I have a tendency to mention stats and what not whenever I get on here and do the morning reports.  Today is no different.  Not doing the morning reports everyday as I used to do in the past, I’ve kind of lost track of snowfall totals and open trail counts.  Don’t get me wrong, I know the general state of things, but I couldn’t believe how bad the natural snowfall totals have been this year when I saw a measly 5 inches of snow that Snowshoe was reporting for this year. Five inches!  I decided to take a look at things just to see how the start of this season ranks to previous years, and as expected it’s pretty poor.  The official Snowshoe weather station up here is reporting 9.3″ of snow since October 1st.  That’s the 8th lowest amount since the station began recording data in 1976 and might be in the top 5 as 3 other years ahead of it are lacking a significant amount of data.

Further south, the station atop Beech Mountain is having an even drier year.  That station shows a measly half inch of snow thus far this season.  That ranks as the fifth worst start to a winter since 1991 in terms of natural snowfall and is probably first or second in reality as the years ahead of it are missing almost all the data.  Woof!

When you consider those subpar natural snowfall numbers combined with the warm spells we’ve had this month, we should be pretty happy to have the terrain we have open right now. Once again, thank a snowmaker!

As I mentioned earlier in the post, we can look ahead to next week and a new year to see the return of more winter-like temperatures.  Panovich talks about this in his latest video.

The return of colder temps is visible on the latest 10 day temperature forecast for Boone, NC, which is close to Beech, Sugar, and App. 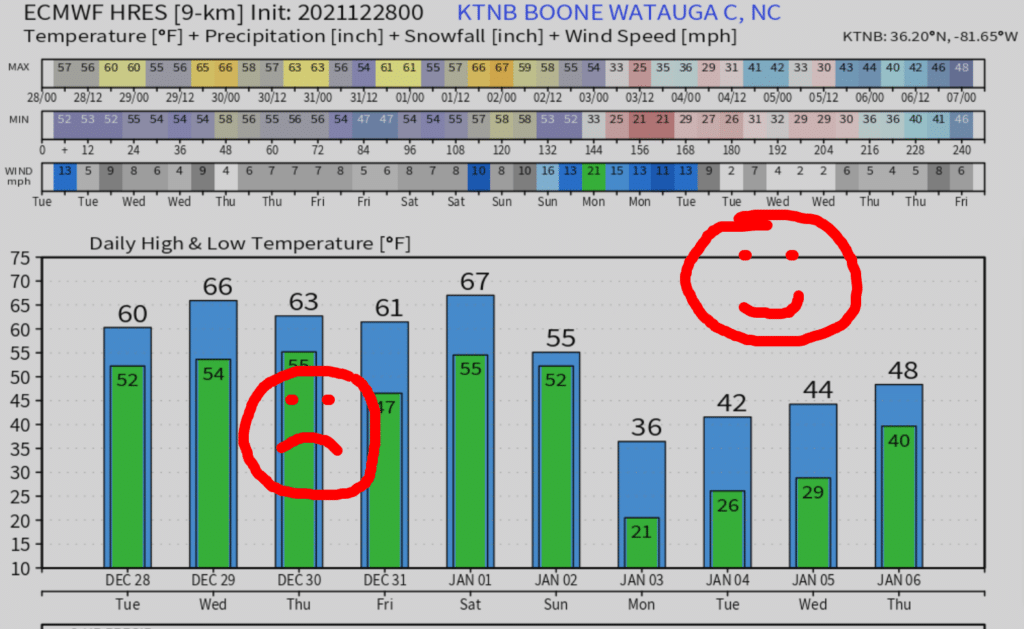 That change is still 5 or so days away and in between now and then it’s more warmth and underdeveloped snow.  If you do have plans this week, stay positive and have fun!  But also keep an eye on things like the SNOW REPORT as operating hours and open terrain could change due to the weather.