Is it Groundhog Day???

My alarm went off this morning to, believe it or not "I got you babe" by Sonny and Cher. It wasn’t 6am, but 6:20am but I had to smile. Things began like every morning lately – get up, get showered, get dressed – no school for the kids (okay at least today they’re on a two hour delay), but I had to chuckle a little as I rethought about the "I got you babe" start to the morning.

THEN I GOT TO THE OFFICE…

One of the first things I did was check my personal SkiSoutheast email and there was Meteorologist Brad Panovich’s Video Forecast email. I opened it, encoded it and uploaded it to the website and watched it.

There was Brad doing the very same darn forecast that he did LAST THURSDAY NIGHT, complete with 8-10" of forecasted snow for the North Carolina mountains and 10-20" of snow for the West Virginia and Maryland ski areas!

NOW THIS WAS GETTING WEIRD!

I’m bright enough that I didn’t actually THINK that I was experiencing my own "Groundhog Day" event, but I was tempted to check my calendar to make sure that I wasn’t reliving Friday morning, December 3rd. (Okay, I’ll admit that I THOUGHT about checking my calendar, but I didn’t.)

Brad’s forecast video which was composed late night was eerily similar to his of a week ago, right down to the same forecasted amounts of snow that (by the way) no other forecaster has called for as yet. Ray Russell of Boone Weather IS at least telling people to "get out the snow tires" this time as he forecasts 2-4" of sleet, snow and ice for the NC ski areas by Sunday AM. Ray is forecasting "Blizzard conditions" for the TN/NC line but falls short of forecasting anymore than 4" of snow and actually forecast less than 2" of snow for the Blue Ridge (lower elevations) Mountain locations.

I checked in on what the NWS is forecasting and here’s the latest as of 8am Friday morning:

Brad Panovich is calling for this next big storm to begin Saturday evening first as RAIN for the North Carolina mountains and then QUICKLY change over to snow and for Sunday into Monday and possibly Tuesday Brad is (again) calling for 8-10" of snow for the North Carolina ski areas and 10-20" (again) for the Snowshoe, Canaan, Timberline and Wisp ski areas. This time he things that Winterplace and western Virginia ski areas like Massanutten, Wintergreen and Bryce should get in on some of this event. He’s expecting Northwest Flow Snows on the back side of this event (like a week ago) to provide most of the white stuff.

We’ve already covered the fact that many long range forecasts include a bit of gloom and doom for January. We’ll wait and see about that, however if Brad’s forecast "Panovich’s out" (I kill myself) the ski areas of the Southeast and Mid Atlantic could be approaching 40-50% of their normal full season snowfall numbers and we’re only into mid December with three and half months to go!

Remember that most weather gurus did their Winter Forecasts back in October and November and nearly in unison they all forecasted 80-90% of normal snowfall for the Southeast and Mid Atlantic mountains. Of course there are a few ski areas in the region which have seen only a dusting so far, so they’ll probably hang their hats on those, but the majority of the resorts in the area have seen abundant snows so far and bear in mind that many ski resorts have yet to ski or ride their first turns of the season. That will change this weekend as several more celebrate their opening days. Check Sarah’s FirsTrax report and SkiSoutheast Announcements (on the front page) for more details.

I DID SUGAR LAST NIGHT AND IT WAS SWEET…

My daughter and I dropped by Alpine Ski Center to demo some new Atomics for the night. Hats of to Bryan McCutchen at Alpine who put his bootfitter talents to work to hot-form-fit some boots for my teenager. We hit Sugar Mountain for a couple of hours and did the top-to-bottom, Upper to Lower Flying Mile run four or five times. We did get a chance to check out the new Red Lift over on Big Red. Sugar had the right side (skiing down) of Big Red open and both the lift and the trail was fun as usual. The new lift is quiet and it was nice to ride up in nicely padded chairs. The conditions were great – no ice anywhere – and Sugar had groomed perfectly as always between sessions.

I mention the "no ice" comment because I read some emails proclaiming such. Not so on this night. The snow was perfect and the snow guns were blasting, but easily avoided all night. I was a little surprised at how busy it got around 8pm. Lift lines actually began to back up a little later in the evening. FYI, it still takes 15 minutes to ride the chair to the top of the mountain but we got in four or five runs before heading home. 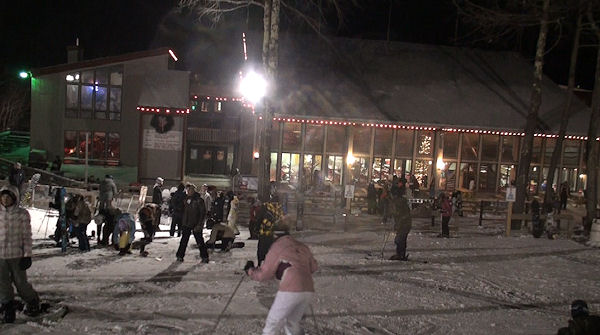 That’s it for now unless something else declares that I am, in fact, reliving last weekend.

Check back for more rants, raves and commentaries. Email me YOUR comments, questions, photos or videos to [email protected] and I’ll post you up!