I Have No Idea What to Title This Article. Conditions Are Great Right Now Though, Go Ride! 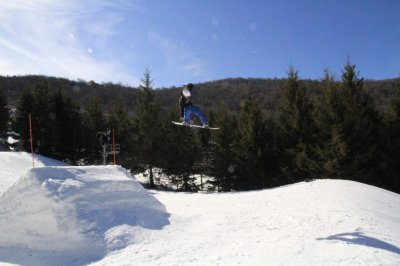 It's been a while but I'm back. I picked a pretty decent morning too as it's currently snowing across much of the region. It's not a huge snow by any means but I don't think anyone is complaining. Snow is snow!

As I said, it's not a big snow event and that is reflected in the snow report. Only a few places are showing anything. I'm pretty sure more than just Beech, Wolf, Sugar, and Timberline are seeing snow, but it's an early morning event so I'm thinking everyone else will be showing new snow on tomorrow morning's report.

You know, I hate to have to call someone out as it's not really my style. However, I feel it is necessary as Sugar's site is saying 3 inches while we are reporting a single inch. I live right across the street from there at an elevation that Google Earth shows as equivalent to that of the bottom of the main lift. We had maybe ¾ of an inch of snow on the ground. An inch might be stretching it. I'm going to leave it at that. Either way, Shug is 100% open today and conditions should be pretty sweet.

I haven't checked the snow report in over a week as I was swamped with the ad server stuff last week. However, I'm kind of/not really surprised to see 10 (counting Liberty Snowflex) ski areas that are 100% open. That is awesome! I know it's been really good but seeing the numbers gets me stoked. Only Wolf seems to be struggling to get anywhere close to 100% open. I'm not sure what's going on over there but I've heard rumors they might be done making snow for the year. Bummer. Everyone else is within 4 trails of being completely open. It looks like we'll have more opportunities for snowmaking this week so hopefully we can see more resorts 100% open by the weekend.

I think one of the last times I did this morning article I talked about it being peak season conditions. Obviously, I was wrong as things have only gotten better since then. We may not have had as much pow in the past couple of weeks, but the consistent cold and snowmaking has led to some solid bases. This is one of those times where some of the extreme base depths on the snow reports page might be legit. I still don't think some of those higher numbers are an AVERAGE, but I guarantee you there are numerous spots on Sugar, Cat, Beech, or App where the base depth is legitimately 7 feet.

I was at Beech last night and it's easily the best conditions I've seen there in two or three years. It's rather impressive how much snow they have on the mountain. I've seen more in the trees and off trail before (I love to explore out there), but as far as what's on the mapped runs it doesn't get much better than right now. I could be living in the moment. Go stand on the side of Upper Shawneehaw along the row of houses and tell me what you think.

I'll sum up conditions before I move on to other things. It's good right now, go ride!

So now it's on to some other news. I'll start with the bad. The Snowshoe Summit has been cancelled. For various reasons, it just didn't come together this year. We actually never announced anything except for the expected dates but I know there are a handful of people who had already made some plans. We might do an informal gathering at Beech that weekend. Nothing is planned yet though. Mike said he might have some comments on this later.

Now on to the good, rather awesome news that deals with Snowshoe. Today is the beginning of their Ridiculous Pass Sale. I think Tonette prematurely announced this last week but if you didn't hear, Snowshoe is selling an unlimited season pass for the 2013-2014 season for $199. You read that right, an unlimited season pass to Snowshoe for $199. Not only that, but it's valid for the remaining of this season as well. That's a cheaper pass than anyone else in the region offers to what is widely considered the best resort in the region. That's pretty sick! The only catch is that this price is only available through February 28th. That gives you 9 days to jump on this deal.

Finally, don't forget about Beech's 80's weekend coming up. There's all kind of events going on beginning Thursday night at Fast Eddie's. Live music, a Big Hair & Radical Air Competition, and the SkiNC.com 80's Apparel Contest are all slated to happen out there this weekend. Mike is actually juding the apparel contest and I'm pretty sure I'll be entering it. Here's a preview of my outfit. What do you think? 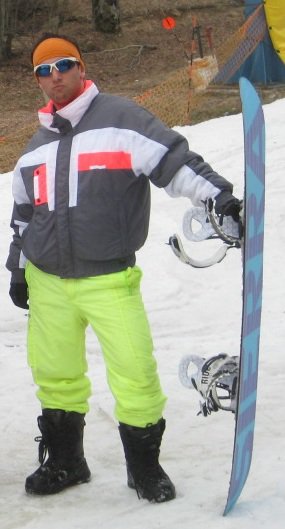 Enjoy that lasting image of me. That's it for today.

Previous Post
NO SKISOUTHEAST.COM SUMMIT THIS SEASON…
Next Post
GrizzlyEnton Hitting the Tree Gap at Beech Mountain on Monday