The Holiday Weekend Has Come and Gone But Mild Temps Remain 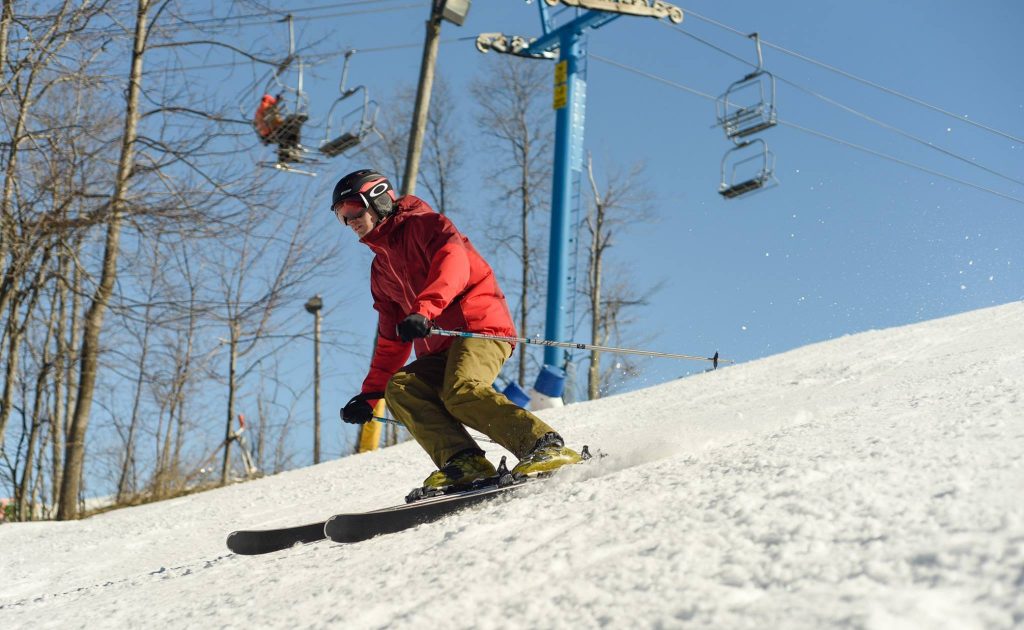 The always important holiday weekend has now passed us by and we’re heading into the latter parts of the ski season now.  Unfortunately, it looks like the week ahead is going to be a challenging one for resorts in the region.  One has already called it quits for the year and another has temporarily suspended operations for a few days.  The good news is that we should have a window of opportunity for snowmaking this weekend, for some ski areas at least.  The bad news, that’s 4 or 5 days away.

Let’s first start with this past weekend.  All in all, you’d have to say it was a successful weekend.  It more than likely won’t break any records for skier turnout, but conditions were good enough that numerous people showed up to the resorts.  Some more than others.  I was doing a scan on the webcams on Saturday and things looked fairly busy at most resorts.  Somebody over on the messageboard said Cataloochee was PACKED.  Another person said Wolf Ridge wasn’t that bad.  Here’s what the base cam at Beech looked like.  Good luck weaving through all those people! 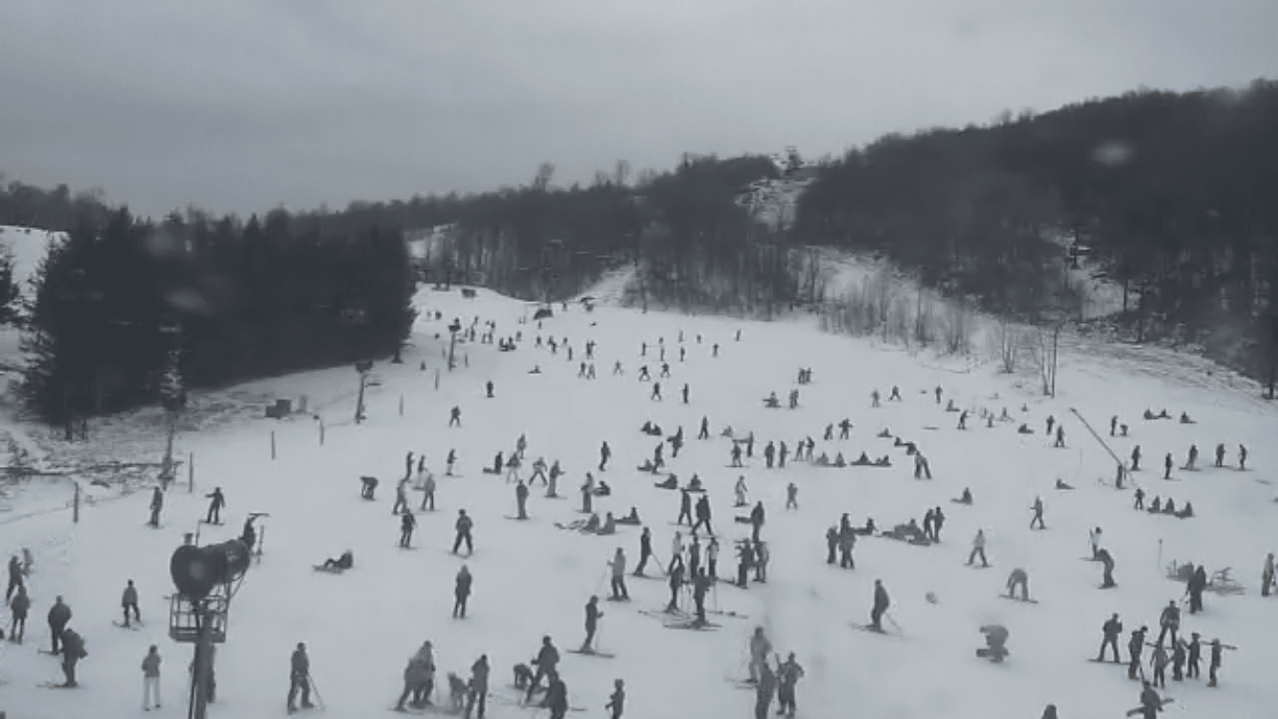 And here’s a view of the base area at Massanutten on Saturday.  The lift line doesn’t look too terrible.  I’ve seen worse. 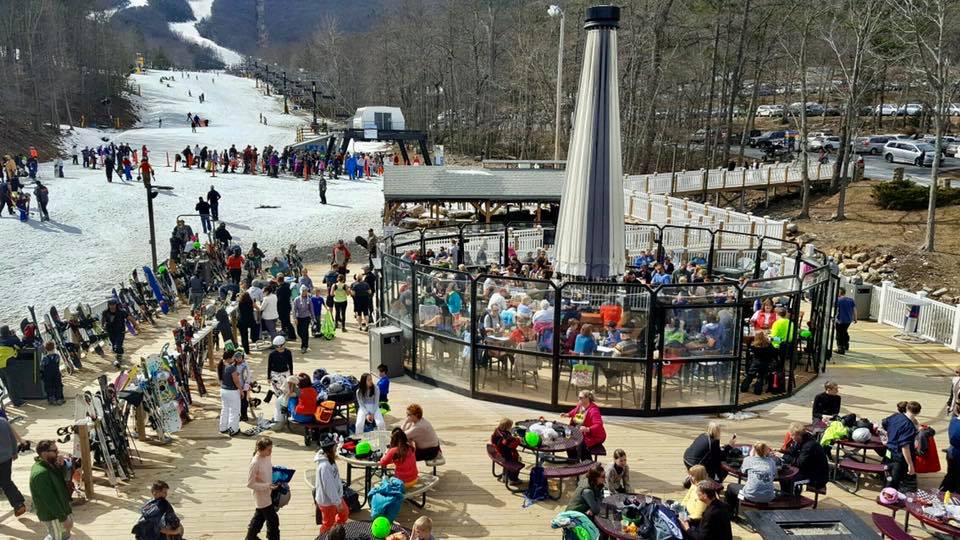 I was out at Appalachian Ski Mountain on Sunday and crowds were wayyyyy less than I was anticipating.  Snow coverage was good and plentiful, albeit slushy, and it ended up being much cooler and cloudier than anticipated.  I didn’t wait more than a minute to get on the lift until around 2pm when things got a little busier.  It was awesome.  I even learned a new trick!

Monday looked like the choice pick of the weekend (unless you rode on Friday) as widespread sunshine finally returned and the crowds were far less.  That’s usually the case with three day holiday weekends as most people pack up and head home on Monday.  Those who stick around are treated to smaller lift lines.

Mike just posted some pics and commentaries from others about this weekend and the upcoming weather as well.  Check that out by clicking the link below.

It was interesting, although not surprising, to read Mike’s post on Sunday where apparently a lot of people were complaining to him about the snow and our continued enthusiasm for it even though conditions were less than ideal for the holiday weekend.  Some people are just pessimists and others try to see the positives in situations.  Has this season been great?  Nope, not at all.  For the most part it’s been a challenging one.  That doesn’t mean it hasn’t been fun though.  I can’t tell you how many days in my snowboarding life I’ve gone expecting subpar conditions and it ended up being a great day.  As long as you have the right mindset (a bad day on snow is better than a good day at the office) and the right group of people to ride with, you’ll always have a good time.  Skiing and snowboarding is completely weather dependent and sometimes you just have to go for it.  If you are a fair weather skier and only go when conditions are pristine, you’re going to miss out on a lot of fun days.

Perhaps I shouldn’t have talked about not being a Negative Nancy right before I talk about the weather for the week ahead, which looks crummy to say the least.  So much so that Sapphire Valley in southwestern NC has called it quits for the season.  They are usually the first to close up for the year but this is definitely the earliest I can remember them doing so.  Other than a good snow back in early January, it was a tough winter for those guys as the cold air rarely made it to them.

Timberline Resort in Davis, WV hasn’t closed for the season, but they have temporarily suspended operations for the next few days in hopes of preserving the snow for the weekend.  Bummer.

I also noticed that Bryce Resort has shortened their hours for at least today and tomorrow as they are only open from 10am-2pm.

Mild temperatures and chances for rain are the name of the game for the next 4 or 5 days.  As Massanutten stated on their snow report, “April in February continues”. Temps in the 50’s and even 60’s for some resorts combined with underdeveloped snow is going to put a dent in base depths.  The mild temps and high skier traffic over the weekend already did a number on some trails, so expect to see a drop in trail counts over the next few days and be prepared for some thin spots if you are getting some turns in this week.

Snowmaking potential returns this weekend for some ski areas on Saturday and Sunday nights.  Sub-freezing temps won’t be widespread though so not everyone will be able to make snow.  A couple nights of snowmaking will be very much welcomed by that point and can hopefully patch things up.

Beyond that snowmaking window this weekend, right now it looks like more mild temps for next week.  To be completely honest, the weather outlook sucks.  There is no sugar coating it.  I was texting Mike the other day and I mentioned how I think it’s going to be an early season this year.  Generally, we see a majority of the resorts close up shop in mid to late March.  I have a feeling we’re going to see a lot of closures in the EARLY part of March this year though.  A few will undoubtedly make it into the latter portion of March such as Snowshoe (100% open with all 57 trails right now) and Winterplace (100% open with all 27 trails right now).  However, I don’t think the same can be said for some others.

Most years, the ski areas have to close up due to reduced skier traffic.  Once it gets warm off the mountain, people forget about snow.  And it’s already warm off the mountain for sure.  Down here in Charlotte, it’s been in the 70’s and the forecast calls for more of the same.  According to Brad Panovich, the average temperature for this February thus far is already warmer than the average temperature for March.  I have been walking around in shorts and sandals and I mowed my grass yesterday.  I was at a marina on Lake Norman on Saturday and my buddy who is the general manager there was shocked that there was still snow in the mountains.  I guess it was easy to see why he would think that when we were sitting on sand on the side of a lake in 70 degree weather.

Once that spring mentality kicks in for folks, snow is the last thing on their mind and traffic at the ski areas plummets.  This year though, it might be a combo of that AND a lack of snow.  Things look DECENT right now.  We’ll just have to wait and see how the snow holds up over the next few weeks.  There is some hope in the 3-4 week range as the Climate Prediction Center shows cooler temps….

…but by then it might be too little too late.  Cross your fingers!

Don’t mistake all of that as me telling you to cancel a trip or hang up the skis for the winter.  I’m just being honest here.  As I said earlier though, don’t be a Negative Nancy!  There’s still lots of fun to be had this season.  I’m already stoked looking ahead to the Snowshoe Summit next weekend and spring park laps at App.  Get out there while you can!

Previous Post
Our Readers Provide Input Into the Current Conditions at the Ski Resorts
Next Post
Ober Gatlinburg to Close Ski & Snowboard Slopes as of Wednesday, 2/22/17 at 10pm