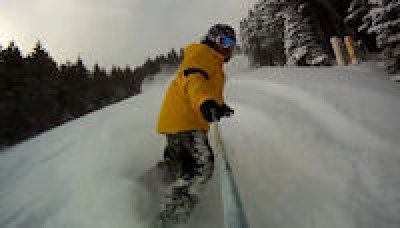 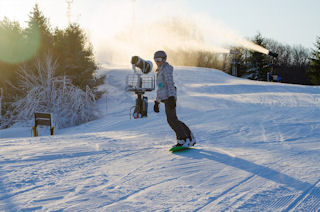 This photo is from Travis Roberts at Winterplace on Saturday!

We've previously reported – but it deserves repeating – that this past mid week saw torrential rains that dumped 5" of RAIN on Beech, Sugar and Appalachian ski resorts, but since that time it has done nothing but SNOW bringing 13" at Beech Mountain since Thursday. Timberline and Canaan Valley get the top "honors" for snow since Thursday with 18.6" of POWDER! Snowshoe has seen 15".

Seems Brad Panovich's forecast for 15" or more was dead on. Others around the area – not so much!

Snowshoe has ANOTHER 7" of SNOW in the forecast for today and tonight and SOME measure of snow is in their forecast through Wednesday! Ditto that forecast for Davis, WV and Wisp's Garrett County.

Beech Mountain and much of the WNC mountains looks to be getting another 2-3" of SNOW today and tonight.

I think it's safe to share that EVERY ski area in the Southeast and Mid Atlantic will be AWESOME today! You can check the snow report for all the details. I don't know if you guys noticed but SkiSoutheast.com is THE ONLY source for ACCURATE 24, 48, 72 hour snowfall totals AS WELL AS the fact that we are THE ONLY resource that shows you the seasonal snowfall for every ski resort in the region! You can see that on the snow report page as well as each of the ski resort marketing pages. You can click on the MEMBER RESORT link at the top of the page and select your ski resort and we cover all that information and more. In fact you can see how much snow fell in several previous seasons. We've archived that data and tens of thousands of PHOTOS from every ski area in the region.

Sometimes I just HAVE TO BRAG 😉

PLAY IN THE SNOW!

Yesterday was the second day in a row that I got to use my old-school snowmobiles. With 7" of snow overnight and HEAVY snow falling at 9am, I think I will be doing that again today!

Here are the numbers at each ski area in the last 24 hours, since Thursday and on the season to date.

MASSANUTTEN: Trace of new Snow; 1/2: since Thursday; 6" on the Season

Beech, Sugar, App and Cat are ALL about 100% open (App IS) and all have nice powder conditions for today.

Wolf Ridge has 10 trails open (of 22) now for day sessions only on Sunday. That's the most terrain they've had open all season. Conditions should be awesome for Sunday sessions.

The Homestead is making snow but only until mid morning. They have 6 of 10 trails open and snowmobiles are open as well.

Snowshoe Mountain adjusted their season snowtotal. We agree with what they are now showing however earlier in the last week or so they had inadvertently added one day twice and were showing 108" which would have taken them to 111" today. Hats off to them for the self-correction.

Here's some other Snowshoe notables: All across the 202 acres of terrain full of packed powder, another 3 INCHES of snow has fallen and made conditions great for hittin' the slopes this morning. Widowmaker continues hosting a race event today, with Knot Bumper calling those looking for some bumps and a little challenge. The snowmaking crews are out now building on several trails across the mountain. They also have been on Spur and Slaymaker that are open for riding and skiing.

There's plenty of park action waiting this morning with hips, jumps and rails beckoning from Progression Session, Mountaineer, Robertson's Run and Timberjack. Skill Builder Park, formerly Cubb Run, is set up and ready for beginners to do some skill building today. Please be aware of variable conditions across the mountain.

TIMBERLINE: 36 of 40 trails open today which is the most of the season to date! Great conditions to boot!

Thanks to all of you who shared the "Southeast Si" Groundhog Day Video. That was cool to see. Speaking of VIDEOS, check out www.SkiSoutheast.com/videos.php as Travis Roberts of Winterplace Resort posted his typical awesome video update of "This week at Winterplace". Also Ed Schneider of Snowshoe showed me what I missed by not finding lodging at Snowshoe this weekend! He posted a crazy POW video riding Snowshoe yesterday.

Be sure to check those out and send me YOURS!