Heading into the Home Stretch Now 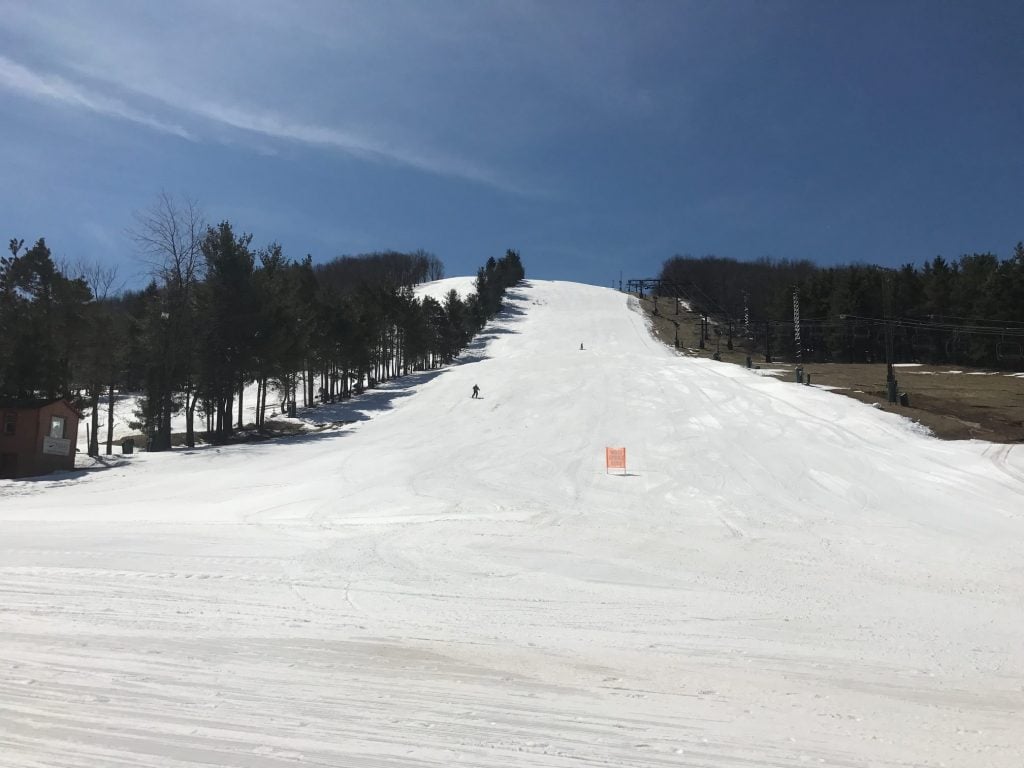 Well, only a few more days remain in the 2016/2017 season.  The end is near.  It’s been a challenging season to say the least and we’ve sure seen our fair share of ups and downs and more downs.  As always though, the ski areas fought the good fight and managed to come through and provide many a turns and good times this winter.

Another somewhat of a cold morning is going to give way to the return of spring temps today.  The open ski areas are mainly in the 30’s today but will see temperatures rise into the 50’s today for the most part, with Bryce Resort in Virginia seeing things get even a little warmer than that.  Unfortunately, it looks like the last several days of the season won’t see much in the way of sunshine.  Today and tomorrow will see partly to mostly cloud skies before Sunday sees widespread rain.  Womp womp.

That forecasted rain for Sunday caused Cataloochee to make the decision to move up their closing date to Saturday.  I figured this would be the case and mentioned it yesterday morning.

Appalachian Ski Mountain and Beech Mountain Resort also close for the season after tomorrow’s day session, so come Sunday morning only Snowshoe, Bryce, and Wisp Resort will be open.  That’s going to be one easy snow report for Mike.

There was hope that Wintergreen and Winterplace would open back up for the weekend after being closed all week, but that isn’t the case.  I mentioned yesterday how Wintergreen announced that they were done, and Winterplace followed suit this morning.  Well, they didn’t make an announcement but the comments on their snow report page now reads “The Winterplace Team wants to thank You for a great season!”.  Bummer.  It looks like they have enough snow but I can’t imagine it makes sense financially as many folks have already forgotten about winter and snow.

So you’ll have six ski areas in the region to choose from today and tomorrow and three on Sunday.  If you’re itching to ski or snowboard make sure and get out on the snow while you can.  I know I’m usually jonesin’ for snow as early as May.

I’m struggling to find stuff to talk about this morning.  I think it’s because I’m so bummed about the season being over.  It definitely was a down year for me in terms of powder days and overall days riding, but it was fun (as it always is) nonetheless.  It was also a first in that I spent more days riding outside of North Carolina than in it.

So instead of rambling on, let’s wrap this baby up.  Thanks to everybody for coming to the site on a daily basis and reading our stuff.  This was my seventh season with Ski Southeast, and each offseason I’ve looked forward to winter and getting to share all the snow news and my random thoughts with everyone.  It’s pretty cool to be involved in something that you are passionate about.  I remember being in college and reading this site every morning.  I never thought I’d be the one writing this stuff on a daily basis.  Hopefully you all have enjoyed what I have to say and I look forward to doing this again next year!

A big thanks to Joe Stevens, David McCue, and Brad Panovich for contributing all season long.  Their contributions to the site have been fantastic.  A big shout out to all of the ski areas and general managers as well.  It’s been a tough year and I can’t imagine how stressful it has been for them.  And finally, a big thanks to Mr. Ski Southeast himself, Mike Doble, for making all of this stuff possible!

That’s it for me this season.  Mike will be with you all for the final few days of the year and he’ll do a wrap up of everything.  Also, be on the lookout for Joe Stevens’ final article of the season on Sunday.  It will be his annual “Snowies” column.  Always a good read.

Enjoy the final weekend of the season!

Previous Post
One Final Night of Snowmaking for a Couple Resorts
Next Post
Ski Resort of the Year Award Goes to…read on to see where!