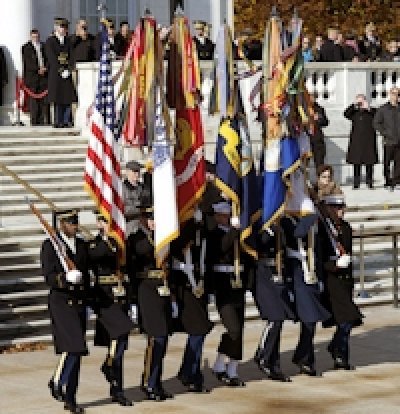 Thank you – THANK YOU – thank you to all of you who have served and who currently serve within any of our branches of the military. As we all know freedom might include the word "free" within it, but freedom itself is never free. We want to express our thanks to all those who serve, and remember those who died to preserve those freedoms.

On to our news of the day… 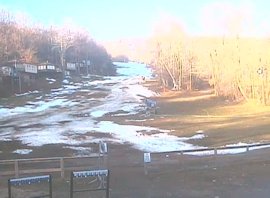 <Sugar this morning – yes they are open.

Today is Sunday and all I can say is that snow doesn’t melt that much at 70° so far this early in the new ski and snowboarding season. That’s great news for the rest of the ski areas that haven’t attempted to open yet. They’ll be excited to know that when they make snow this season, that this new variety of manmade snow simply stands up to 70° temperatures better than last year’s version.

Since sarcasm is hard to detect within the printed word, please…

Without question I know that Cat and Sugar are not r-e-a-l-l-y in "ski season mood" (or mode) quite yet and they’re probably just not all that stoked to go and post the fact that their bases are melting away as fast as the wicked witch of the west did in the old Wizard of Oz movie. Come to think of it, didn’t she melt after Dorothy threw some water in her face?

I wonder if WATER will make this new, manmade snow melt?

The bottom line is that Cataloochee hasn’t downward adjusted their base depth in the last three days as they are still reporting 4-12" this morning – and have done so since Friday. Sugar dropped theirs 1" in that same period. One look at the base cams will tell you that snow does indeed melt at 70°. 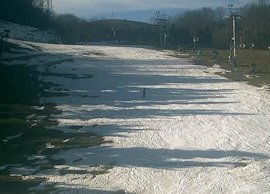 Cataloochee this morning – Give ME some of that!>>>

Things don’t look all that worth hitting the snow at Sugar Mountain today, but we’ll leave that for you guys to decide. Cataloochee’s two open trails actually look pretty decent – considering – and I LOVE Cataloochee’s decision to allow skiers and snowboarders to make a decision as to whether or not their conditions are worth the $30 lift ticket for today AFTER TRYING A RUN. They posted:

"Guests unhappy with conditions will receive a full refund after one run. Refunds will not be given after that."

DAMN! That is VERY COOL!

I would not suggest that anywhere else!

Cataloochee also advised us, "We will make a decision regarding Monday operations on Sunday by 5pm. Persons planning on skiing on Monday, should call and check with us for an update prior to coming. We will resume snowmaking tonight, temperatures permitting and we will be operating on 2 slopes and one lift with a base of 4-12 inches and a loose granular surface with some thin spots – Intermediate Lower Omigosh, serviced by the Omigosh Double Chairlift and Beginners Rabbit Hill on Sunday. Pricing will be a special $30 lift ticket rate for everyone. Regular rental rates will apply.  THINK COLD! Snowmaking will resume as quickly as the temperatures permit."

Unfortunately "temperatures won’t permit" tonight as highs will be in the mid 60s for today and only dip to around 48° tonight. Looking at the long range forecast over around Maggie Valley, we’re seeing highs in the mid 50s to mid 60s every day through November 20th and through that same period there are only a couple of nights where overnight temps dip into the upper 20s that MIGHT allow for some scattered snowmaking.

Again – that is the forecast through November 20th for both of our currently OPEN RESORTS.

Things look a notch colder up around Snowshoe Mountain in West Virginia with Tuesday through Friday nights of this week dipping down to 23-26° each night. That certainly could make Snowshoe’s mountain ops kick on the snowmaking system.

LET’S LOOK FORWARD TO THANKSGIVING AND BEYOND

We’ve got a lot of work still to do as we are installing and implementing SEVERAL new HD streaming webcams at The Homestead, and THREE at Snowshoe and we can use the milder temps to get that work down before the finger-numbing temps that come with winter at the highest elevations.

I can tell you that when 10° temps combine with the winds at the top of Snowshoe’s 4848′ elevations – I would NOT want to be installing metal equipment!

We hope to be able to announce some new cameras and weather equipment being installed at MANY MORE of the ski areas of the Southeast and Mid Atlantic at the end of this week. We have a dedicated campaign that we will be working on this week to speak with every ski resort management crew. We’ll let you know how those conversations go later in the week.

ARE YOU GETTING READY FOR SKI AND SNOWBOARDING SEASON?

I’m getting ready for ski and snowboarding season, but not the way you guys are thinking. Okay, maybe some of you who know me might speculate that I’ve begun to punish myself a little by beginning a workout regime. That’s partly true only because I haven’t buckled down to hitting the treadmill, bike and weights everyday just yet. Maybe 11/11/12 will be that day. So if you guessed that I’m getting ready for the season by getting in some semblance of skier shape, you’d only be partially correct.

No, I’ve been getting ready for this season by seemingly having to replace every computer in my personal, ski network arsenal. This past week my office desktop started displaying weird and I figured since my computer was the oldest one in the office, that I’d reward myself with a new one. A new HEX CORE, super-computer now imposes itself on my desk.

Then as I was preparing to go out of town Friday to attend the SC/Arkansas game I plugged up my trusty, skiSE laptop to setup a couple of things so that I could handle the early-season "snow report" remotely and it decided that it was done serving my remote computer needs.

I really like the laptop that I purchased for my wife for Christmas a couple of seasons ago, but I wouldn’t dare try taking that bad boy over! Soooo, I was at Best Buy for the third time in less than a week. This time I was looking for a super-laptop to replace my formerly reliable "SkiSE" laptop.

I am using it this morning to post today’s news and I have to admit that I am not missing my "old buddy" one bit as this new one is cranking out the same kind of daily ‘word overload" that my old laptop did.

Look for more news and I also want to THANK ALL OF YOU who have followed us on Twitter lately. Our Director of Communications, Tonette Fisk, Kenny (theKenDog) Griffin and myself will be coordinating our efforts this week to include Joe Stevens’, Herb Stevens’ and Brad Panovich’s content within those tweets to keep you guys quickly informed as things happen this season.

We are also working on a plan this season to feature our most dependable and reliable readers by posting their trip reports to the front page of the site. Twitter will be a common tool within that process to notify all of our readers with what the conditions are like on the mountain day-to-day.

Also Twitter and our Messageboard members WILL BE THE FIRST TO KNOW about FREE LIFT TICKETS and FREE VACATION GIVEAWAYS this season. Many of these contests will go to those who reacte the fastest to many of those giveaways! By following us on Twitter and Facebook YOU WILL BE AMONG THE FIRST to see when we are giving stuff away!

Click here or on the bird to the left 😉 and allow us to keep you up to date on all that’s happening this season!

Previous Post
Haters Gonna Hate. What can you do?
Next Post
Cataloochee Ski Area AND Sugar Mountain Close Until Snowmaking Resumes