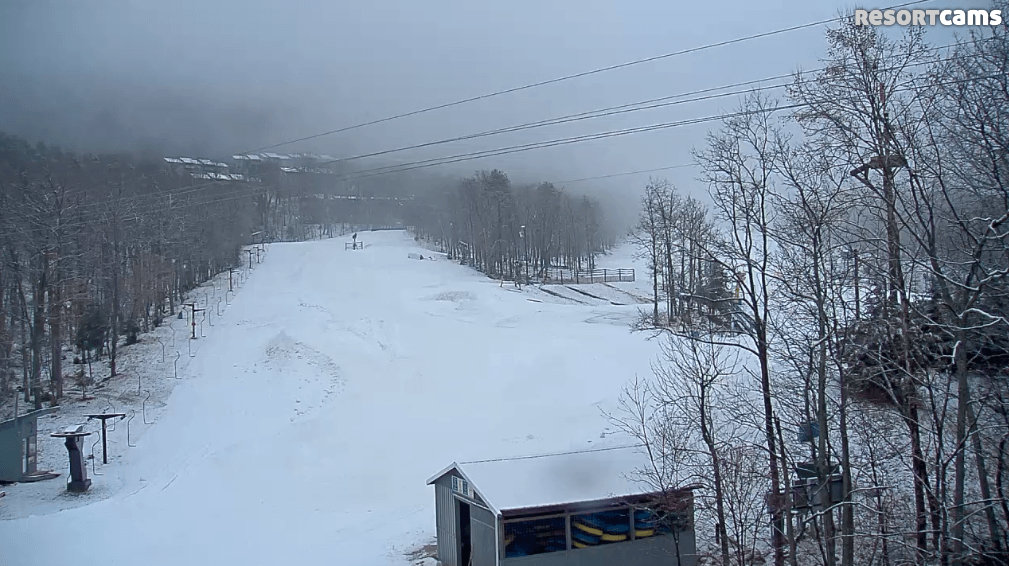 Happy Vernal Equinox!  Welcome to Spring!  Well, not yet actually.  We still have several hours to go as Spring doesn’t officially start until 6:45pm tonight.  Mother Nature must have gotten confused as earlier this week it looked like spring and today it looks like anything but.  We have some snow in the region to talk about.  Just a teeny bit anyways.  But it’s still snow.

Here’s some knowledge for you…

Why is it Called “Equinox”?

On the equinox, night and day are nearly exactly the same length – 12 hours – all over the world. This is the reason it’s called an “equinox”, derived from Latin, meaning “equal night”. However, in reality equinoxes don’t have exactly 12 hours of daylight.

What Happens on the Equinox?

As I mentioned, we do have a bit of snow that fell overnight and this morning.  Massanutten is reporting an inch this morning and I saw a trace or so on the Wintergreen cams.  Additionally, Canaan Valley and Timberline received 0.7″ according to the reporting site.  That puts them up and over 140 inch mark for the year.

It’s nothing to go crazy about, but it makes the views a little better when the landscape has a layer of white.

The Massanutten cam this AM.

Unfortunately, it looks like light showers and fog will be the status quo for the rest of the day at the resorts.  Clouds should be decreasing throughout the day though and tomorrow, the first full day of Spring, looks like a dandy.  Sunshine and warmer temps.  I’m looking forward to a day of hotlapping Appalachian Ski Mountain!

Sunday looks pleasant as well and the weekend overall looks really nice.  I’m pumped that the weather is going to be so nice as this is the final weekend for many resorts.  Here’s a recap of who is closing this weekend.  There’s an update in there as well.

These are all of the resorts who are for sure closing this weekend.

– Beech Mountain Resort is done after tomorrow.  From their site…

Beech Mountain Resort is scheduled to close for the 2014-2015 season on Saturday, March 21st at 5 pm.   Join us to celebrate a fantastic season and enjoy this beautiful spring weather!  Festivities will be held at the View Haus cafeteria!  As always, we value our loyal customers and we can’t thank you enough for the continued support.

– Massanutten Resort is calling it quits after Sunday.  They’re open for day sessions only all weekend with tubing as well.

– Canaan Valley just announced that this is their final weekend of the 2014/2015 season.  They’ll be done after Sunday.  They had originally planned on being open through next Sunday, but the warmer weather has pushed up that closing date a week.

– Timberline will close up shop after Sunday.  This is Local’s Cup Weekend out there and they’ll have some events and what not going on.  They also have $1 lift tickets for the Sunday afternoon session.  Check out their Facebook page to see some of this info.

– Wisp Resort up in Maryland is done after this weekend as well.

These are the ski areas who might be done after this weekend, but are leaving themselves open to the possibility of extending their season into next week.

– Wintergreen might be done after Sunday, or they might not.  If they do extend their season, they’ll more than likely be closed next Monday-Friday and then re-opening for one final day on Saturday.  Regardless, this weekend should be fun up there as they have their Slide and Splash Weekend event going on.

– Cataloochee could call it quits after Sunday.  They say they’ll be operating through at least March 22nd on their site, but haven’t announced anything for next week yet.

– Winterplace could possibly end their season after Sunday as well.  I called up there this morning to try and get some information regarding next week but nobody answered.  They haven’t announced anything yet.

I’ll update this report today if these three resorts announce anything and Mike will have you all covered tomorrow and Sunday as well.

I saw a cool quote from someone on Cataloochee’s Facebook page.  He said “I heard if your the last person off the slope on closing day you get a season pass for next year”.  While that may not be true, I think it’s a fantastic idea!  I think every resort should do that for it’s patrons.  You couldn’t announce it though as you’d probably have some hardcore people out there through the night. 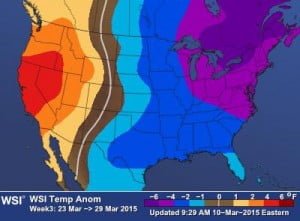 So after this weekend there’s the possibility that only a handful of ski resorts in the Southeast are going to be open.  Such a bummer!  Even more so when you look at the forecast for next week and it looks on the cool side for the most part.  The image to the right was tweeted out by Jim Cantore this morning.  It shows temperature anamolies for next week and you can see it’s going to be much cooler here in the Southeast, and the entire East Coast for that matter.  So much for spring!

Everyone enjoy your weekend and get out and ski and/or snowboard if you can!  We only have a few more weeks left and I know I’m usually feening to get back on a board by the end of April.  It’s a long 7 months without it.