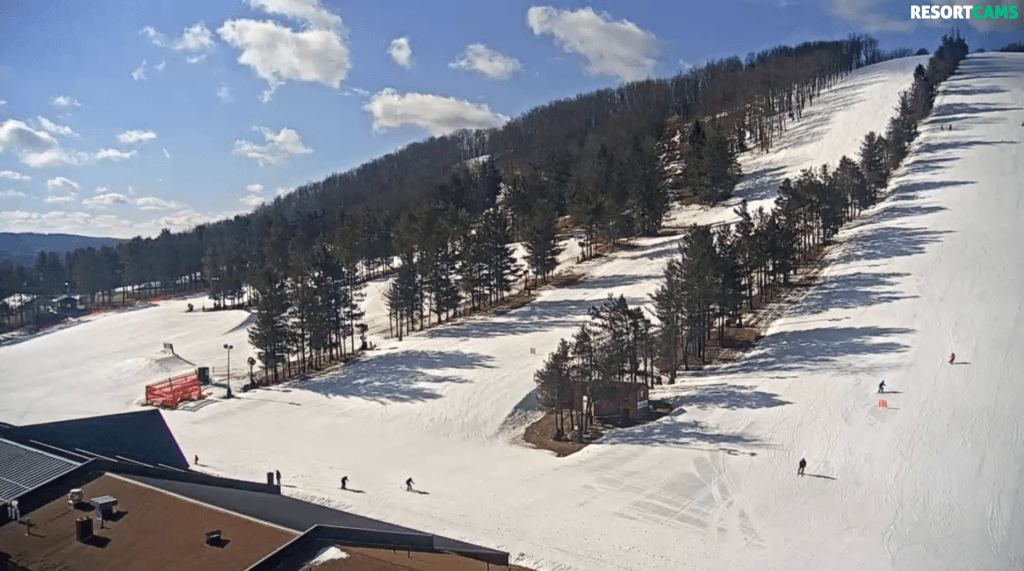 I can tell we are nearing the end…of the 2018-2019 ski and snowboarding season here in the Southeast and mid-Atlantic. It is always a bittersweet time for me…more bitter than sweet for a week or two. I always look forward to “lake season”, but this time on the calendar is one that gets me thinking about how the season went and how few days I ended up on the snow.

We’ve long reported that ski areas don’t close for a lack of snow, but for a lack of skier visits. That is a fact that was not lost on at least one of our Facebook followers when he was responding to someone pointing out how vacant the slopes were on various resort webcams.

I am rambling today…so let’s begin  with Snow Reporting…and we’re providing a lot of intel on closing dates, etc.

Appalachian Ski Mountain – 25° and they were making snow overnight and as of 9am this morning. (In fact, I think they were the only ski area that made snow!)

They are 100% open with all 12 slopes and terrain parks. They are open with ice skating as well. Day sessions only the rest of the season, which (unless they pull a surprise) will end NEXT Sunday, March 24th.

Beech Mountain Resort – 22° – The slopes look great and they are operating with 9 of 17 slopes for day sessions only. Ice skating and tubing are closed for the season. Beech will close for the season next Saturday, March 23rd.

Cataloochee Ski Area – 29° – Cat has had a great season and from what we are hearing, they don’t plan on allowing the fun on the snow to end until March 31st…at least. They are doing day sessions only the rest of the way and TODAY they offer 13 of 18 slopes and trails. Snow tubing is closed for the season.

Bryce Resort – 30° – Bryce has been hard to get intel out of via their website all season long. They are still open with 7 of 8 slopes and looking good in fact. I called and spoke with Michelle in the Ski Boutique and she helped a bunch. Right now the plan is to be open this week, Monday-Friday from 10am-3pm. Then next weekend, March 23rd-24th they will be operating from 9am-4pm.

There is an outside chance that Sunday, the 24th will be their last day of the season. However, there is also a chance that they would CLOSE for the week of Mar 25-29th and reopen for one more, bonus weekend. So keep checking back.

Massanutten Resort – 26° – Kenny Hess, Steve Showalter and the crew at ‘The Nut’ have had a really strong season. They are looking great for day sessions only the rest of the way. Today they play on 12 of 14 slopes and 10 lanes of snow tubing. According to the intel out of Massanutten, they will be open today and tomorrow and the closed March 19-21st and reopen for one more weekend of fun March 22-24th.

Omni Homestead Resort – 26° – They are playing on 3 of 9 slopes today until 4:30pm. No word yet on a closing date, but we are kind of thinking that announcement will come soon…and probable closing dates are either at the end of day today or next Sunday, March 24th.

Snowshoe Mountain – 18° – I watched as from 9am-9:45am only a couple of people were making laps over on the Silvercreek side of the mountain and the snow looked AWESOME! They are enjoying Ballhooter Festivities today and 58 of 60 slopes and trails, snow tubing and more. Snowshoe Mountain has previously announced they will ski and ride until March 31st.

Winterplace Resort – 21° – Joe Stevens and his crew will be at Winterplace today. They are open with 23 of 27 slopes and trails. Winterplace has shared that they will be open for day sessions through Saturday, March 23rd AND some bonus days may be added.

Canaan Valley Resort – 23° – They will end their ski and snowboarding season TODAY, March 17th at 4:30pm. They will do it in style with 23 of 47 trails open and tubing as well. This season has certainly been a very special and great one for the Davis, WV ski resort. Justin Harris shared:

“We want to give a special thanks to everyone who helped make this season successful, and we are already looking forward to seeing you all next season. However, don’t forget that Canaan Valley Resort is a premiere spring, summer, and fall destination, so if you have never visited us in these seasons, this year is the time to do so. Again, thank you to all guests for such a great year! We look forward to seeing you on the slopes today. It’s been a pleasure bringing you the trail report.

Ober Gatlinburg – 32° – they will end their season for skiing and snowboarding today at 7pm. Ober is open year round though for all sorts of scenic amusement including Snow Tubing for a while yet and ice skating, mountain coastering, the Alpine Slide, Amusement park, bear habitat and Aerial Tram. If you have never been to Gatlinburg…you should make plans to do so, Gatlinburg is a special place.

Today Ober will end their season with 4 of 10 slopes open.

Wisp Resort – 25° – They will operate for day sessions with 20 of 34 slopes and trails open. Of course they have tubing, ice skating, mountain coastering and terrain parks open as well!

No word just yet on a closing date.

Saturday was a BLAST!!!

Saturday was a busy day for me and some family and friends who made a day of it in downtown Boone beginning with lunch at The Local (a great eatery a block off King Street). We then hung around for the 2nd Annual Boone St. Patrick’s Day parade and after a short break we ended up spending a few hours at the 5th Annual Daniel Boone Rail Jam (or ‘rail ham’ as I finger fumbled typing it into my phone via a LIVE broadcast).

The events were well-represented online as SkiSoutheast and Appalachian Mountain Brewery were both viewed by around 5500 or so followers. Add in however many Jordan Nelson was pushing via his “flying cameras” and I think social media did the events justice.

I have to report that the St. Patrick’s Day parade had a distinctly “pretty small town” flavor to it, but that IS what we love about living in the mountains. However, small town flavor aside, both sides of King Street were lined four to five deep with people in attendance. So it was a huge success.

The Daniel Boone Rail Jam was simply “off the charts” successful. The event began at 6pm and I thought I was there plenty early at 5:15 or so and the entire parking area was nearly full when I arrived. As we entered the Horn in the West grounds, it was obvious that Danny Wilcox and his promotional staff had pulled out all the stops to ramp this year’s event up a HUGE peg. The crowds were already out in force and by 6:30 or so, the place was rocking.

Danny Wilcox and snowboarding superstar Louie Vito stoked the crowd up to begin things and then Blowing Rock’s own (and Appalachian Ski Mountain kid) Luke Winkelmann, who is NOW one of America’s best snowboarders, got things going by being the first down the ramp, christening the event if you will. Winkelmann was not competing (obviously) but it was a great way to start the event.

We have so much video footage to share that I think I will just point you guys to our Facebook page instead of embedding several clips on today’s FirsTrax.

The BEST of the BEST riders (and the video we have) took place when the sun went down and the place lit up…and I will compile that video and post some in a separate story later today or Monday for those interested. It was really REALLY a great time and you guys and gals should mark it on your calendar for next year.

I want to extend another special thanks to Danny Wilcox for the awesome hookup. 9-10 of us hung out in the VIP section; had way to many free drinks and the food was great as well. It was awesome to get some photo ops with Louie Vito as well.

It was also great to see Drew Stanley and Tommy Miller there…as well as numerous friends that I ran into.

Email me anything that comes to mind… [email protected]

Previous Post
Happy St Paddy’s Day Eve! A Fun Day on Tap
Next Post
NO SUCH THING AS LAST TURNS by Joe Stevens