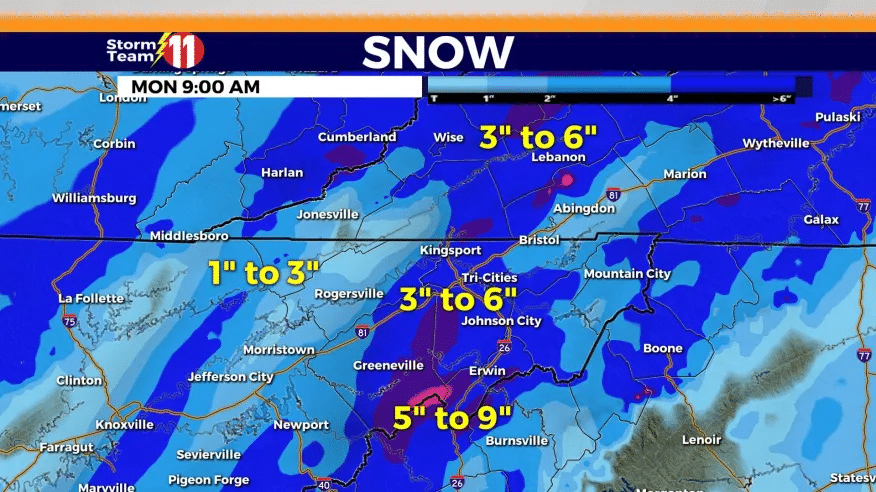 Only ONE or TWO ski resorts are open in the Southeast and mid-Atlantic. In reality only ONE that we can be certain of. Snowshoe Mountain, with 15 slopes available is open for skiing or snowboarding on Sunday. Bryce Resort is reportedly open, but truthfully they have not been updating their own website and getting someone on the phone is a challenge. Our buddy, Bill Nabers who serves on ski patrol there provides us the best intel and he posted this yesterday:

Bryce is open. They even had the fireworks and torch parade at midnight New Year’s Eve.

I can’t fault them too much as it has been a real challenge for a lot of the ski areas to keep sufficient staff working.

However, not one ski area is open in North Carolina or Tennessee and Maryland. If Bryce Resort is open for skiing & snowboarding today, they are the only Virginia ski area to remain open. That leaves Snowshoe Mountain in West Virginia as the only place to ski or ride today in the region.

Snowshoe Mountain posted that they had to close down Silver Creek, and a few trails on the main portion of the mountain due to significant rains over the previous 24-36 hours.

That’s it for your Sunday Ski & Snowboarding “offerings”.

CHECK THE SNOW REPORT FOR REOPENING SCHEDULES as most ski areas are already “cocked and loaded” with their snowmaking equipment the MOMENT that the temperatures drop to appropriate readings this afternoon.

As of this report, most ski areas are planning to make a ton of snow beginning tonight and some are planning to reopen Monday, January 3rd, and a few are reopening Tuesday, January 4th. A couple of resorts are just advising to stay connected and that they will reopen ASAP.

GLORIOUS SNOW AND COLD TEMPS ARE HEADED OUR WAY

The BEST news of this entire ski and snowboarding season (to date) is that consistent cold temperatures and some significant snow is expected late this evening and overnight. Here is a quick-glance summary per location.

SNOWSHOE MOUNTAIN
Sunday night lows drop to 18° with 2-4″ of snow expected. The temperatures look to allow for AROUND-THE-CLOCK snowmaking from this evening ALL THE WAY THROUGH AT LEAST SATURDAY!!! Highs in the 20s to low 30s and lows in the teens and low 20s all week! Snow could be HEAVY at times Monday morning, so we think they will pick up more than the 2-4″ being forecasted. SNOW is in the forecast again Thursday night and Friday! Some of the mountaintops could see somewhat more moderate highs to near 40° and cause snowmaking to stop at times. For the most part, this week will be awesome for snowmaking…

CANAAN & TIMBERLINE
Ditto the forecast above with slightly less snow from this storm. The current path projected looks to be delivering just a bit less snowfall, however, as we all know about Tucker County, WV – they tend to get a bit more snowfall than often predicted.

WINTERPLACE RESORT
If the NWS forecast holds, the path of the moisture and timing of the cold temps tonight – COULD make for 3″ to 7″ of snow! Snow is in the forecast for Thursday into Friday at this time. Snowmaking temperatures are in the forecast every night and several days as well. Lows tonight are in the 20° range and Tuesday night around 15°.

MASSANUTTEN RESORT
Snowmaking could be a challenge Sunday night with expected lows of around 29°. With 2-4″ of snow also in the forecast, we’re thinking the snowguns will fire up as well. Snow could be heavy at times Monday morning. It looks like great snowmaking temperatures each night through the week!

WINTERGREEN RESORT
If the forecast holds, Wintergreen could pick up as much as 2″-4″ of snow Sunday night and another 1″-3″ on Monday with snow heavy at times. Great snowmaking temps occur every night through the week.

OMNI HOMESTEAD RESORT
As with the forecast for Wintergreen, the weather service office out of Blacksburg, VA is currently forecasting a bit more snow for this area. 3″-5″ possible Sunday night and then 1″-3″ on Monday. Snowmaking temps are in the forecast every night through this week!

BEECH AND SUGAR MOUNTAINS
3″-5″ of snow is in the forecast after midnight on Sunday night. Another 1″-3″ is expected on Monday. Both Beech and Sugar have only seen JUST UNDER 1″ of snow on the season, so this will be THE FIRST real, measurable snow of the season. Temperatures crash after midnight changing precipitation to snow around 3-4 AM. Snow and snow showers continue into Monday morning. Most of our region will pick up 4″-7″ with higher totals at highest elevations. Overnight lows and some daytime highs will allow for snowmaking all week long.

CATALOOCHEE SKI AREA
Snow will hit the Maggie Valley ski area around 1am Monday morning and the current forecast track for this system (and the timing of the cold air) is predicting around 3″-5″ of snow overnight with perhaps another 1″ of snow on Monday. There should be around-the-clock snowmaking overnight tonight and Monday…and most every night this week!

OBER GATLINBURG
The good news is that the popular, Smoky Mountain ski area should get from 2″-4″ of snow overnight Sunday night and they SHOULD be able to make snow MAYBE tonight and certainly Monday night. However, other than that, it is going to be a “toss up” as to whether they will see snowmaking temps again until Thursday and Friday nights as those look like awesome nighttime temps for snowmaking as lows are expected each of those nights around 19°

Saturday was my travel day to return home from our Holiday ski getaway and I can tell you that it rained pretty good most of the trip until we hit the tunnel on I81 at the West Virginia / Virginia state line. The moment we exited the tunnel, the skies were much less cloudy and the rain stopped. When I pulled into my driveway in beautiful Sleepy Hollow the temperature was 70°!

I don’t know about you guys and gals, but I’m pretty happy to put 2021 behind us. Anywhere from 2.5″ to 4″ of rain fell in December across all of the ski mountains of our region. Almost NONE of that was in the form of snow. As I have already reported, most of the North Carolina, Tennessee and Virginia ski resorts have only seen a TRACE of natural snow all season. Only Beech and Sugar have recorded close to 1″ of snow so far and THAT was back on November 4th – so NO SNOW in December for the North Carolina, Tennessee and Virginia ski resorts.

We have also previously shared that Canaan Valley and Timberline have seen 13.1″ of snow on the season, but only 2″ of that total fell in December! In fact, David Lesher of Canaan Valley Weather shared this bit of news this morning:

The steady rain, sometimes heavy, yesterday and last night that measured 1.64 in. is the fourth largest single-day January precip amount on record here.

Let’s HOPE that this next snow event is the first of MANY for the rest of the season.

THANKS FOR ALL OF YOUR NICE COMMENTS!

I suppose it is because this season has been SO challenging that our reporting has had to be a bit more detailed, but we have been receiving more feedback from our readers and we are very appreciative of it. Here are some recent comments and shares:

David P. (who describes himself as an ‘avid SkiSoutheast’er’ and weather guru) shared:

A game-changing cold front moved through early this morning. Rain ends early but a stray shower is possible during the day. However, a fast-moving but vigorous trailing disturbance is the news maker today. It’s stronger than previously thought and will give us our first significant snow of the season–late tonight into Monday morning. Most of our region will pick up 4″-7″ with higher totals at highest elevations.

Teresa Connelly posted, “It might be new New Year’s but it is also a New Ski Season. Let’s hope January will be more like winter! BTW, your news has been spot on lately, and much appreciated.”

I have been a huge fan of this website for the last four seasons. I’m always impressed with the amount of detail that goes into the daily news. This year that amount of detail has been off the charts and very helpful. Thank you so much. My husband and I have made three trips up to ski only because of your news. It gives us a lot of confidence to know when and where to go to get the most out of our trip. Your website has saved us time and money. Again, thanks! – Dana E., Cayce, S.C. (Btw. I know you’re a Gamecock fan. How about that bowl game!)

Dana – thanks for those nice comments and yes, How ABOUT those Gamecocks?!?! What a dominate win over a very good North Carolina Tarheel football team.

Big fan of this website since the ’01-02′ season. I really enjoy all of the cams and frankly I use them more than anything else to determine where I take my family on ski trips. Your news is contagious and has prompted us to make more trips each year than usual. Wish you guys would think about covering the PA and NY ski resorts. Also, my girlfriend and I made a trip to Timberline last year for the first time since the new owners came in and really enjoyed it. – Stephen

That will do it for me today. COLD TEMPS and SNOW is in the forecast. As it hits and the snowguns crank up, we will try to get some video and post again.

The photo of the day up top is compliments of WJHL Television in Johnson City, TN