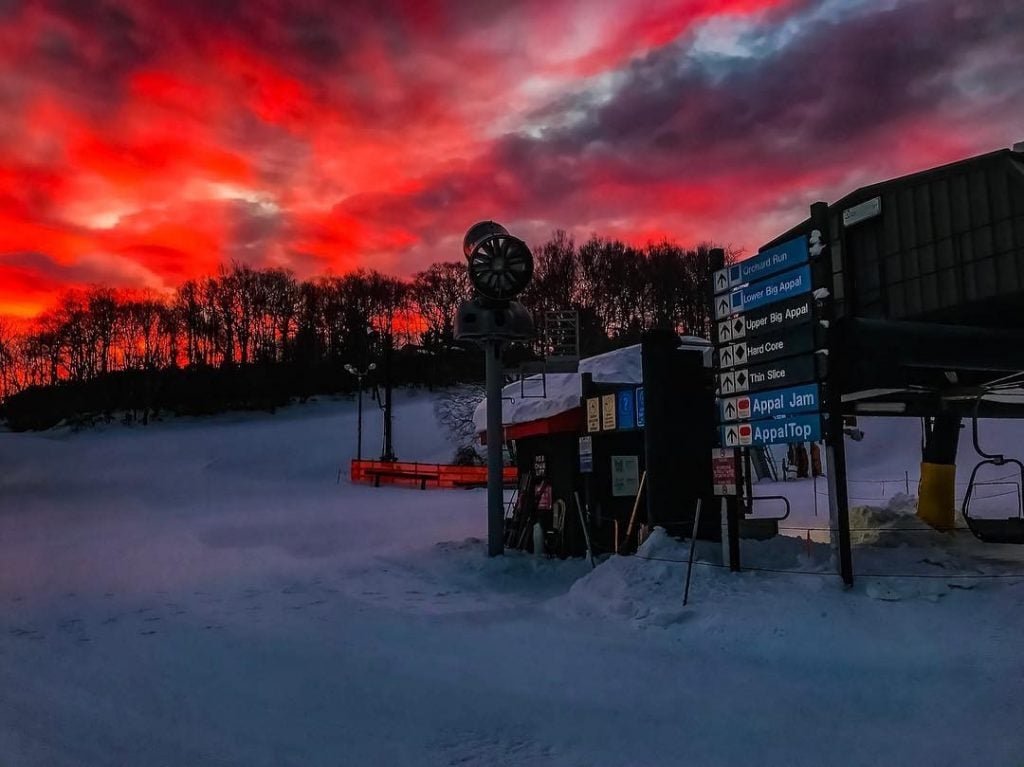 I will direct you guys right to our full SNOW REPORT for all of the slope openings and conditions. A quick summary is that conditions are great everywhere and all ski areas are open.

The Photo of the Day was taken THIS MORNING by Appalachian Ski Mountain’s crew. I don’t think it was doctored, but I can’t swear to it. Red sky in the morning…eeeep!

The best video provided lately HAS to be the one featured in our Featured Video Gallery and now shown below from Snowshoe Mountain from this week. The slow-mo and music is unique and the conditions are POW!

Great to see these kind of conditions this early, right?!?!

While we are on videos…I also really like the one from Winterplace Resort from Friday. Check it out.

Our own David McCue was in Virginia making the rounds to a few of the resorts. I know that he’s got plans for WV today and Monday and we’ll share more photos. His quick comment was, “Virginia set the bar high for an opening weekend; I’m so glad I was there.”

Thanks to Bryce Resort’s Bill Nabor for another resort opening photo op.

I worked (Ski Patrol) for Bryce’s ‘soft opening’ (open for member/owners only) today in advance of Saturday’s opening to the public. It was a good trial run. Two slopes are open from the top: Bootlegger (picture here) and Redeye. Teaching areas off of the three carpet lifts are open as well. Tubing was not open today but should be more than ready for Saturday. Skiing was good and Bootlegger was very, very, nice. (Good coverage. No need for ‘rock skis’. 😊) Snow was also made on Revenuer’s Run, but not enough to open, yet. Snowmaking is underway at this time in the meadow (open area at the bottom) as well as Revenuer’s and Redeye. Tomorrow should be a blast.

Saturday night at Bryce there is a special event honor a century of service at Bryce Resort for brothers Horst and Manfred Locher who both came to Bryce 50 years ago. Prost!

A friend of mine went to Massanutten today and indicated that he had a good time there. With all four resorts open (Wintergreen and The Homestead also opened today) the Shenandoah Valley and environs in Virginia are into the ski season. – Bill

Editor’s Note: I love it when crews from one ski area promote others. Nice job Bill!

I received a number of emails from people talking about how much nicer conditions are here in the Southeast and mid-Atlantic than in some places west of the Mississippi. I won’t get into ANY measure of “gloating” because God doesn’t like ugly…but I will say that we’re been blessed with nice, natural snow and cold temps so far. Most Tahoe resorts are struggling to provide open terrain compared to normal conditions for this time of year and they are worried about the upcoming Christmas to New Year conditions. We all know how tough things are out west right now with California residents describing neighborhoods as a war zone with all of the wildfires. (Prayers up for those guys.)

I have also received a fair number of emails from people watching the weather forecasts that seem to be talking about a “warm up”. Boy you guys are spoiled! Sure, temperatures are forecasted to rise just a bit to around NORMAL for this time of year and yes, we may even see a day or so of some “under-developed snow” (rain) but nothing slope condition destructive…and THEN COLD, COLD, COLD as we get to Christmas week.

Let me just say that conditions at YOUR FAVORITE ski resort for the week of Christmas-to-New-Year will be the best they’ve been in a few years. MAKE THOSE RESERVATIONS if you haven’t already! (SOME ski areas are already 100% booked!) 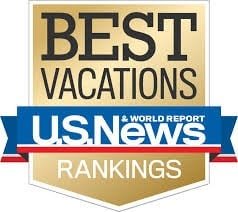 US News & World Report released their 50 Charming Small Towns to Visit if You Love Winter and Blowing Rock, North Carolina made the list.

I will also say that you could also include most any of our ski resort towns on that list. There is something magical about snow, the sparkle of lights and Christmas in the mountains.

You guys should always bookmark and visit the many webcams at our resorts….

It is amazing what some very nice, early snow and great snowmaking weather can do to put everyone in a great mood at resorts everywhere. We are just getting started, but coming out of the gates so quickly across the region is really nice to say the least.

Watching Ober Gatlinburg, Cataloochee, Wolf Ridge and Sapphire get some LOVE from ma nature has been awesome. Seems like the last couple of years has been especially tough on those ski areas. Lack of snow, water shortages, fires, milder temps…you name it…it has been a challenge for some ski areas over the last 2-3 seasons. So it has been awesome to see much more equitable conditions across the entire region. 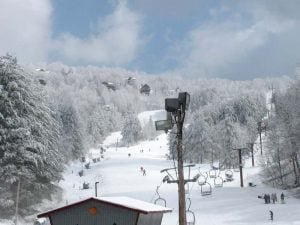 Speaking of Wolf Ridge Resort – I hinted last week that there would be some HUGE news about a ski area being purchased. A LOT of you emailed me, immediately assuming that I was alluding to Wolf, which has had a few purchase attempts over the last few years. I can confirm that you guys are correct. An offer has been made and accepted and a deal is in place to purchase the resort. I can also share that I know the buying partners really well. I have been in communication with several of the players and I can tell you that everyone is excited about what this new team will do to take Wolf to another level. However, as these things tend to do…there will be a waiting period to “get to a closing” so we have agreed to keep “mum” on things until that happens. However, I have spoken with two of the principal partners/visionaries and they are stoked about where Wolf could be very shortly.

If everything works out, a closing is expected in late February, early March which will allow Wolf to work through this season and then hand off the baton to the new people. I’m excited to be able to share what their vision is…and you guys will be stoked as well!

While on Wolf, they have 11 runs open today; including the infamous double black diamond run “THE BOWL”.

Timberline Resort – they got a couple more slopes open for today. They also shared, “The Mid-Station will be open today, December 17th with Timberline and Whiteout open. On or by Christmas Week we will have Upper and Lower Salamander, Upper White Lightning, Flag Spruce, The Ceiling, Bear Stroll, Timberline and Lower Heaven in addition to current trails that are open including Woods Hole and Cross Roads.”

Looking for a ski job?

Still on Timberline – ResortCams.com is hosting/sponsoring the Timberline Resort LIVE CAMERA this season to provide a dedicated connection to make that camera better and more responsive. Our Kenny Griffin did a great job of configuring that camera to do some special panning to show off more of the mountain. Great snow there too! Check it out at: http://www.resortcams.com/webcams/timberline/

THE FIRST TO GET TO 100%! Drum roll….Cataloochee Ski Area in Maggie Valley! They are open with 18 of 18 trails! Snow tubing is also open!

Canaan Valley opened a ton more terrain and are open today with 17 trails. That is CLOSE to 100%!

Snowshoe Mountain – 34 of 60 trails open, 134 acres open for day sessions and Silver Creek is open for night sessions. (We are aware that all of Snowshoe’s cams are down. We’re certain they are working on connectivity.)

CAN OUR RESORTS MAKE THE MOST SNOW…?

Wintergreen Resort is home to one of the world’s most sophisticated snowmaking systems. First installed during the 2002-2003 winter season and continuously upgraded, this state-of-the-art York® computerized snowmaking system gives Wintergreen the SNOWPOWER to consistently offer the Mid-Atlantic’s best skiing and snowboarding surfaces. Wintergreen is the only ski area on the East Coast to have 100 percent of its terrain covered by automated snowmaking.

Theoretically with optimal conditions, Wintergreen Resort’s snowmaking system could cover a football field with 37 feet of snow in just 24 hours!

Joe Stevens’ Thinking the Same as Moi This Morning…

Joe and I tend to do that a lot. Be sure to check out his Snow News is Good News Column…DON’T WORRY, BE HAPPY