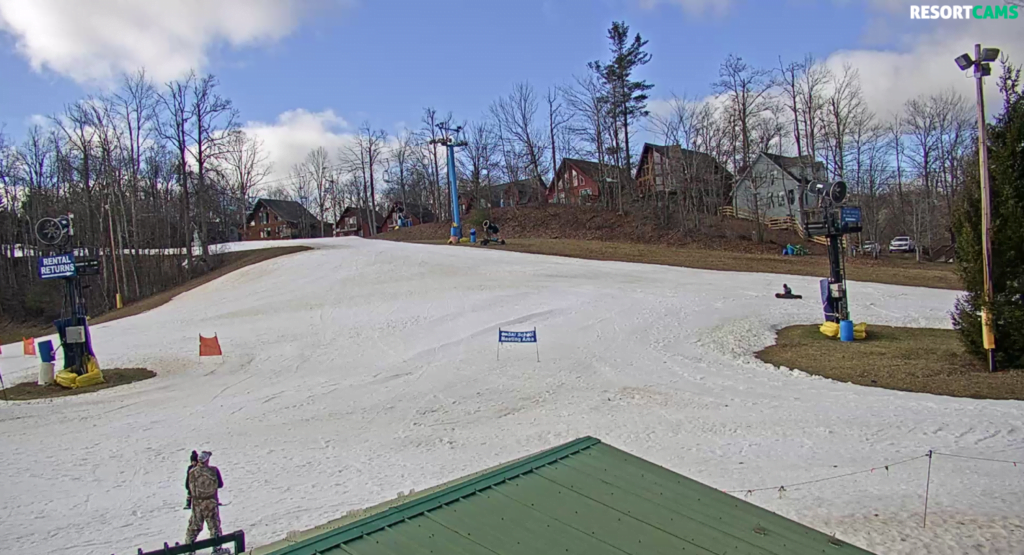 For those of you who know me or have been faithful readers of this column for over a decade, you know or realize that I try to live my life with the glass half full, not half empty. With that in mind, I shall provide everyone my thoughts for this week’s column.

This past Friday I was able to join a group of middle and high schoolers from Hurricane, West Virginia on the slopes of Winterplace Ski Resort in Raleigh County, West Virginia.

Prior to the visit to the resort, there was a lot of apprehension of both the groups’ chaperones and students that it was going to be too warm to ski and snowboard or it was going to be raining. This information gotten from the various weather apps that are available to smart phone users.

Through mid-day Thursday, the various weather services were calling for rain and daytime temperatures in the 60’s. I tried my best to calm some of those fears, with a “let’s wait and see” attitude, but for the most part, the doom and gloomers were strong in number.

This is the fifth year I have helped out the young skiers and snowboarders and know that they usually start arriving at the resort around 5 pm. Taking that into consideration, I try to get to the resort around 2 pm, which enables me to get in a number of runs, prior to the anticipated onslaught by the young outdoor lovers.

After arriving, the first thing I do is to send a message to the lead chaperones and let them know what the current weather conditions were at the resort, so they can prepare the students for what to expect upon their arrival. This time around and with my glass half full, I was able to inform the leaders that the 2:15 pm temperature was 52 degrees, with partly cloudy skies. I provided additional information that there was still snow in the trees from the natural snowfall that had occurred earlier in the week. When I noticed that not all of the natural snow had melted, I knew conditions were going to be, for the most part, not bad at all.

I got out on the slopes with Tom Wagner, Winterplace’s Executive Vice President for a few runs with my longtime outdoor adventure friend. There was a time a few years ago when Tom and I actually set up a mini-terrain park on the grounds of the West Virginia State Capitol, with 20-tons of show we trucked in from Snowshoe Mountain. So, you can see, we are a couple of guys, that again, have glasses that are half full.

During our first lift ride, I was pleasantly surprised with the amount of cover on the slopes that were open at the southern West Virginia ski resort. What I didn’t see from my chair were thin areas or bare spots. More on just why that was the situation in a moment, so read on, please.

To tell you the truth I was expecting, soft snow on the trails, something that skiers and snowboarders find during spring skiing periods. What I pleasantly found was a firm surface that allow my snowboard to glide across the top layer and make some nice turns, without digging in and slowing down.

A good way to know just how much snow cover is on a slope is to check out the cover on the steeps of any trail. It takes a good deal of snow to provide the proper cover on steeps and what I found at Winterplace was more snow on the steeps than on some of the flats. Not to say to flats were suffering, I am just saying there was a whole bunch of snow out there on the trails.

I learned from Wagner that this was the first time that he had gotten out on the hill in a few days and he was also pleased with how the snow was holding up during this warm period facing resorts in the southeast region.

This is when he brought me up to speed on how Winterplace’s Mountain Ops folks decided to cover the slopes this season. What he told me was that it was about the quality of snow cover this year, instead of quantity of trails. What this meant is that, Winterplace’s snowmakers hit the resort’s most popular trails hard, and I mean really hard, whenever snowmaking conditions were available.

I witnessed firsthand the snowmakers efforts as there was tons, upon tons of snow on the trails that were open for skiers and snowboarders. On top of that, the resort was providing six lanes for snowtubing, which that in itself blew me away because I also know that snowtubing areas take, again, a whole bunch of snow. Looking around the region I see that a number of resorts are still providing snowtubing, so hats off to those mountain operations.

Wagner and I made a number of runs and enjoyed everything that was open on that day. Again, what we found was a pretty firm surface that forced us to get up on our edges. The long and short of it, we had fun and that’s what it is all about, isn’t it?

I sent a couple of messages to my son Christian who was beginning his fifth year as a member of the schools’ ski clubs, letting him know what they were going to find and what trails were in good shape. A number of the open trails were some of his favorite that Winterplace provides, and he was able to spread the word to his fellow ski clubbers.

I guess the moral of this week’s column is, make sure to keep your glass half full, as you just never know what is going to happen, if you don’t try it out yourself.