FOUR BILLION POUNDS OF SNOW ON OUR SLOPES!?!?! What!

How much snow IS Four Billion Pounds of Snow? If my elementary math skills are accurate that would put an average of 62" of snow across the 1302 acres of skiable terrain that make up the ski areas of the Southeast and Mid Atlantic. We talk more about that in a second. Read on!

I have to admit that I’m looking forward to a couple of days of not having to fight near zero degree temps in the morning or 15° temperatures in the afternoon. I can’t tell you how many times over the last few weeks that I’ve had to pull my gloves off to do something that required some finger dexterity and had my fingertip go numb. It will be kind of nice to see a few days with highs in the normal or average range. After that, bring on another round of frigid and snowy weather…but a break will be well received by many.

On Tuesday I was preoccupied with some growth plans that we are implementing around here and I didn’t pay close attention to the weather forecast – particularly after it was bombing snow for the first part of the day and then again late in the afternoon around here. I THOUGHT that today was supposed to be return to mild temps (and it is…but later today – not this morning) and I walked out to my truck this morning with no coat on and when I cranked up I couldn’t believe that it was 5°!

I was driving back from Beech Mountain late on Tuesday around 7pm and the roads were clear and it wasn’t snowing. I drove down Hwy 105, down the steep grade near Smoketree and still no snow. About the time I hit the foot of Seven Devils where it intersects Hwy 105 the road was snow covered and it was bombing snow and that continued into the typical "no-snow Foscoe" area. Typically the reverse is true and that was kind of strange.

We received reports that Boone was getting good snowfall as well. As it turns out most of the North Carolina mountains picked up from a dusting to 1.3" of new snow. The Virginia and Tennessee ski areas were skipped – again – no natural snow. The West Virginia ski areas picked up another 1" to 3.8".

For you who are keeping score, that is now 26 straight days with snow on the ground and 17 of those days with snowfall for the North Carolina ski resort communities. The West Virginia Ski resort communities (and let’s throw Wisp in there with them) have now had natural snow on the ground for 47 straight days and they’ve seen snowfall on 33 of those 47 days.

SOMEONE THOUGHT I DIDN’T HAVE ENOUGH TO DO TODAY!

Cynthia Marquette of Richmond, Virginia wrote, "I read your website daily and as a math major I have been amazed by the volume of snow that has been on the ground for some time now even though not so much here in Richmond! I don’t know how many acres each state has but it would be cool to calculate the weight of all the snow in the region! Wouldn’t it?" 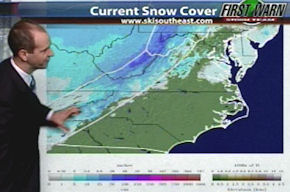 <Snowcover Map as of this morning! Yep, that’s my buddy, Brad Panovich!

Okay, okay she got my brain kickstarted and my first thought is that only a small portion of each state has received natural snow depth or snow cover and that would be hard to even estimate. However, it might be kind of cool to determine approximately how much snow was AT every ski area in each state…I think.

Since we know the skiable acreage of each ski area and the reported base depth, I THINK I remember my math to determine cubic feet. One quick Google search tells me that there’s 43,560 square feet in an acre. Popping the snow depth into the math gives you the cubic measurement. Another quick search provided the approximate weight of a cubic foot of snow. With that in mind I THINK the calculation would go like this:

Let’s apply that across each resort:

Total = 2,038,057 tons of snow at ski areas of the Southeast and Mid Atlantic! That’s more than FOUR BILLION pounds of snow!

Knowing our readership, I’ll probably get a couple emails either advising me that I’m an idiot and that my math skills are ludicrous OR maybe my math skills are correct but someone will email me that I’m off on how much a cubic foot of snow weighs. Actually, I used 15 lbs but the condensed nature of the snow base on our ski areas probably weighs more. Hmmm, maybe I need to recalculate. Naw. My brain already hurts! 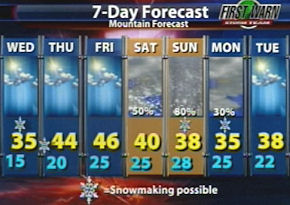 He is forecasting a mild weekend compared to the Arctic Outbreak we’ve had over the last few weeks, however what will feel like Spring to many of us here will only be temperatures that are AT or only slightly above average for this time of year. A mild weekend will be phenomenal to experience as skiers and snowboarders can shed a few layers and ski for prolonged periods without having to run in to thaw out frozen fingers and toes.

Brad is hinting that we’ll see some milder days over the MLK weekend but temps at night that should allow for some more snowmaking although honestly the ski areas COULD opt to simply NOT make any snow and allow the huge crowds a full weekend of perfect conditions and no snowguns bombing the slopes which are already buried under feet of natural and manmade snow base.

Panovich is calling for highs in the mid to upper 40s for the North Carolina, Tennessee and Virginia ski mountains for Thursday into Friday and then a bit cooler on Saturday and Sunday. The weekend is still looking like we could see a wintry mix of underdeveloped snow (freezing rain, etc) and we’ll provide another update on that Friday AM.

Brad provides us with a nice forecast that averages temps for our coverage area and with that in mind here is a little more regionalized forecast for the weekend according to the NWS.

Saturday – High 43° Lo 33° – Daytime sessions should be nice with some cloudiness to hold the snow in great shape. We should see some light rain moving in at NIGHT with some freezing rain at higher elevations.

Sunday – High 43° Lo 31° – Early Sunday should be a bit wet but ending later in the day with more of a misty drizzle or some freezing rain.

Monday – High 43° Lo 23° – Normal temps but still some leftover drizzle and fog clearing later in the day. May see some sun as the day goes on.

Friday: Mostly sunny, with a high near 52. West wind between 3 and 7 mph. Friday Night: Partly cloudy, with a low around 29.

Saturday: Partly sunny, with a high near 48. Saturday Night: A chance of snow. Mostly cloudy, with a low around 30. Chance of precipitation is 40%.

M.L.King Day: A chance of rain and snow. Mostly cloudy, with a high near 45. Chance of precipitation is 30%.

Saturday: Partly sunny, with a high near 40. Saturday Night: A chance of snow. Mostly cloudy, with a low around 26. Chance of precipitation is 40%.

M.L.King Day: A chance of snow showers. Mostly cloudy, with a high near 35. Chance of precipitation is 30%.

Saturday: Partly sunny, with a high near 39. Saturday Night: A chance of snow. Mostly cloudy, with a low around 26. Chance of precipitation is 30%.

That’s it for today. Enjoy the milder temps today and check back within the next 24/48 hours to see the latest weather news.

Check out the Snow Report at https://www.skisoutheast.com/skireports.php  and please send us your favorite ski photos, ski videos, trip reports and comments to [email protected]