Election Day to Bring in Storm 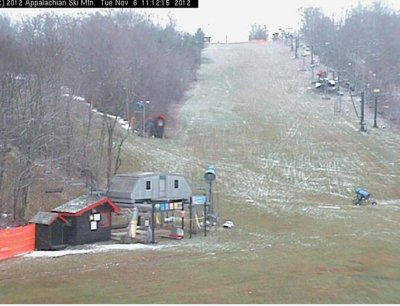 …an actual storm, that is! Meteorologists have been tracking a Nor’easter since late last week that’s expected to peak tomorrow. If any of you are wondering what this means for our ski resorts, don’t get too excited (it’s worth a cheesy nod, but no cheer). A few slopes may gain an inch or so of natural snowfall, but the real benefit will come from the colder temperatures.

According to local weather reports from Ray’s Weather, The Weather Channel, Weather Underground, and High Country Weather, this storm will be a breeze compared to last week’s Frankenstorm. By breeze, I mean on its own. Unfortunately, those who are still recovering and are in the path yet again may not think so little of it.

The resorts, however, should be in good shape, or at the least, no worse shape. Here’s a look at what each area can expect:

Sugar is starting to see a dusting >>

App, Beech, & Sugar – There’s a chance their snow totals could increase slightly. Ray reports the details, "Election Day features lots of gray, but little/if any precipitation around the High Country. It will be unseasonably chilly today, and this colder weather will carry over into Wednesday. Tomorrow will have snow showers, mixing with rain once you get lower than about 3,500 feet in elevation. Some light snow accumulation will be possible across the higher elevations. Early Thursday cloudiness will give way to clearing, followed by a significant moderation in temperatures starting on Friday."

High Country Weather gives the following comprehensive account, "It’ll begin it’s trek up the east coast tomorrow. This Nor’easter will be much weaker than what we saw last week and the effects will be much less significant. Tuesday sees scattered showers and chilly temperatures. The worst effects with this system will be seen on Wednesday as scattered rain and snow showers combined with blustery winds will make for a less than ideal day. No real snow accumulations are expected at this point but the higher elevations could see a dusting to an inch or so. By Thursday, the area of low pressure will be up into New England and we’ll see a transition back to pleasant weather. High pressure will begin to build back in and Thursday through the end of the weekend sees a return to mild weather. Temperatures moderate each day and by the weekend a lot of locations will be nearing the 60 degree mark. It’s going to be a really nice weekend, unless you’re already in ski mode."

Sapphire – It’s a toss up. There’s a 50% chance of rain and snow today, which drops down to 40% tonight and tomorrow. By Thursday, the weather will be clear.

Wolf Ridge – They won’t see anything until tonight. Rain and snow will start tonight and continue into tomorrow, with less than one inch of accumulation. Temps will remain in the low 40s until Thursday, when they’ll start to rise.

Wisp – It’ll be clear to partly cloudy all week, with temperatures in high 30s, but by the end of the week, they’ll raise to the low 50s.

Ober – Rain and snow will come and go today with a high of 49. Rain showers tomorrow, with temps in the mid 40s, and by Thursday, it’ll be cloudy with temps on the rise.

Winterplace – There isn’t any significant amount of snow expected, but will receive some shower tonight and into tomorrow. A high of 50 will remain until Friday, when it’ll raise a few degrees.

Bryce, Mass, & Wintergreen – All three will see a similar trend. Today will be mostly sunny and partly cloudy tonight. The rest of the week shows high 40s even up to high 50s, working its way to a clear and warmer weekend.

Homestead – Today’s clouds lead way to PM showers, but by tomorrow, it’ll clear up with temps in the high 40s for the rest of the week. 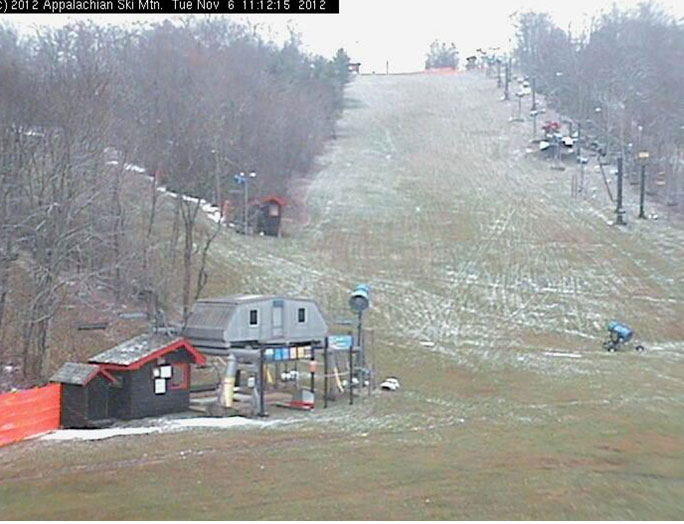 That’s it, folks. For those who missed it, or dozed off the past few lines, we’re looking at 5 resorts with the potential to pump up their bases – App, Sugar, Beech, Cat, and Wolf Ridge. The colder temperatures are where the advantages come in. With a few more resorts planning to open over the next few weeks, they could use some lower numbers to help with snow making.

Stay tuned to see how it all pans out. And don’t forget to follow us on Twitter >>

Email me at [email protected]!