A Few Days of Some Great March Skiing and Snowboarding 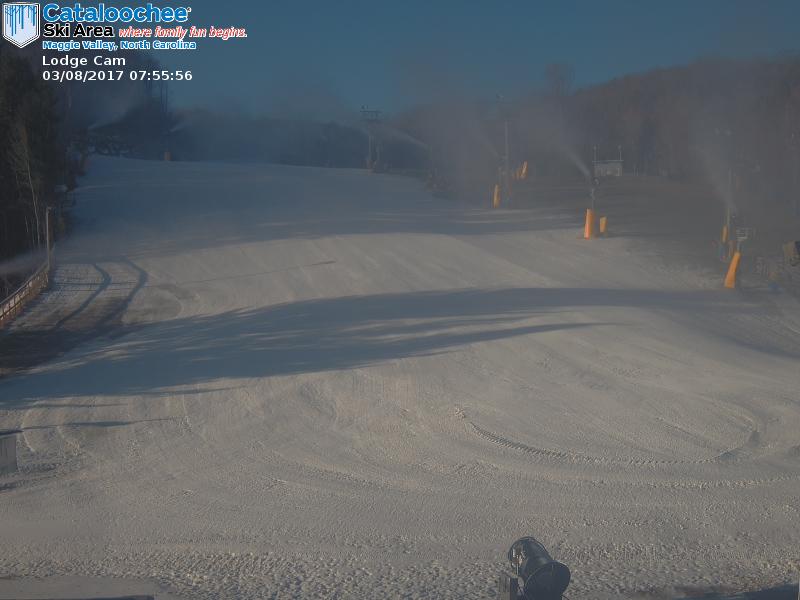 The rain of yesterday is a distant memory this morning as sunshine has enveloped the region.  It is an absolutely gorgeous morning and the next few days will see much of the same, providing some pretty good spring skiing conditions.  There’s still the potential for snow this weekend, although where it falls remains the big question.

First, a big shout out to Cataloochee this morning as they are the only ski area in the region to be making snow this morning.  Temperatures there just barely got cold enough.  Cat said they would make snow at every opportunity through March 11th and as promised they turned the snow guns back on overnight.  It is a beautiful scene out there this morning.

A few other resorts dipped below freezing overnight, but it happened so late that they must have decided to just hold off for now.

Today and tomorrow look like a perfect opportunity to go skiing and riding if spring skiing is your thing.  Today will generally be cooler than tomorrow, but both days will see bluebird conditions with some decent snow.  Even with the rain yesterday, we’re still only a few days removed from a multi-day and night snowmaking stretch, so the snow should still be holding up nicely.  I was just looking at the Winterplace base cam and it’s showing those blue skies I was talking about.  It also shows some impressive base depths on a few trails.  You can see just how thick the slab of snow is. 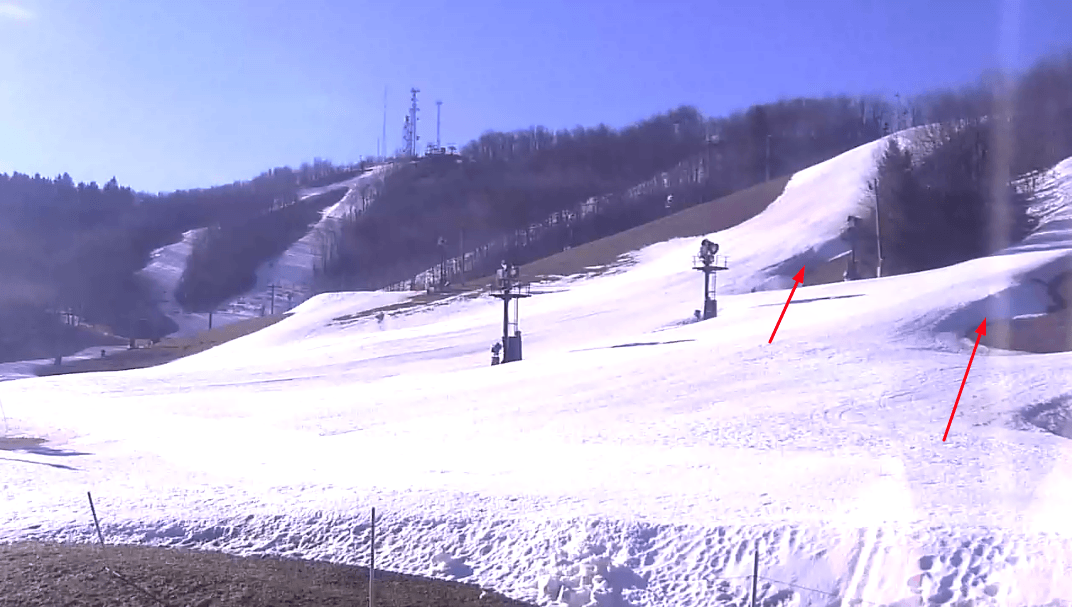 Friday continues to look like a transition day as it will be more cloudy than not.  Some light snow is possible up into West Virginia for Snowshoe, Canaan, and Timberline but right now it doesn’t look like anything crazy.

Saturday and Sunday is what everyone continues to look at.  Yesterday I talked about how the models and forecast would fluctuate, and sure enough that happened.  The trend yesterday and so far today is to keep bringing the snow band further south.  Right now, the North Carolina ski areas would be the winners in terms of snow.  That is quite a difference from 2 days ago when the bullseye was directly over Snowshoe.  I will say the totals have been taken down some as well though.

We’re still 3+ days out from the event and I’m sure things will continue to change, so just keep an eye on things if you are in the mood for some possible powder this Sunday.  Nobody has put out any forecast totals yet, and rightfully so as that would just be dumb.  I was surprised though to see that the local forecaster for the NC High Country mentioned “plowable accumulations”.  It’s going to be a long few days of model watching for weather geeks like me!

A Look Back at Winter

As I’ve done a few times this winter, I wanted to take a look back at the weather stats.  January and February were undoubtedly mild, and the numbers I found and shared definitely proved that.  Now that we are into March, I wanted to look at winter as a whole.  I know winter doesn’t officially start for a few more weeks, but meteorological winter runs from December to January.  Those are the months that are used for seasonal averages, thus that is what I will use.

Let’s start in North Carolina.  Once again I am going to use both the Beech Mountain and the Banner Elk weather stations due to the fact that the Beech station only goes back to 1991.  The Banner Elk station is close by and gives us a much larger data set as it goes back to 1907.  We all knew this winter has been subpar, and the numbers reiterate that.  The average temperature for Beech Mountain this winter was 34.4 degrees, which is 1.3 degrees warmer than any other year since 1991.

The average temperature for nearby Banner Elk was 37.7 degrees, which ranks as the 9th warmest winter season since 1907.  Impressive.  The charts showing the rankings are below.  Beech is on the left and Banner Elk is on the right. 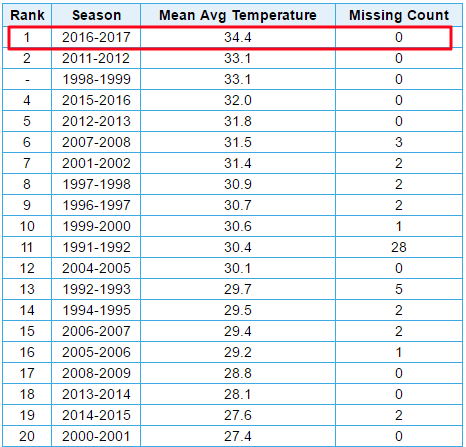 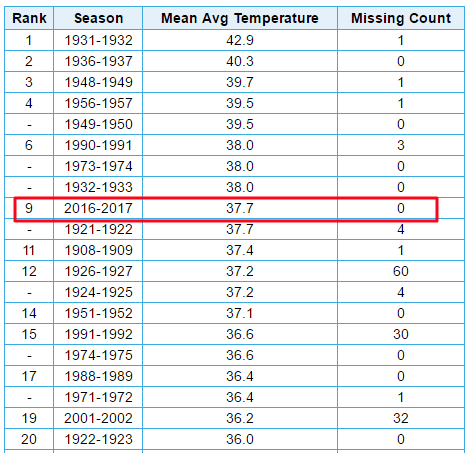 Funny enough, I was showing Mike some of these figures last week and he told me that some of his friends had been around the High Country for 30 years and many proclaimed that this was the warmest winter they could remember.  I then also showed the Boone, NC stats that go back to 1980 (more than 30 years).  Sure enough, this winter was the warmest during that time period by more than 3 degrees!  So yeah, if you live in the Boone, Banner Elk, or Beech Mountain area then this has been the warmest winter that you can probably remember.

Looking at Snowshoe in West Virginia where stats go back to 1976, we can see that this winter ranks as the fourth warmest during that time period.  Last year was the fifth warmest.  Two bad years in a row! 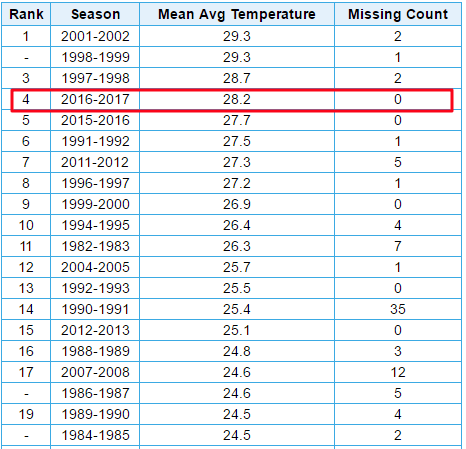 What’s crazy to think about is the fact that this is the fourth warmest winter in the last 40 years for them yet they’ve somehow managed to have 50+ trails open since early to mid January.  That goes to show just how good the snowmaking infrastructure is there, and everywhere for that matter.  Joe Stevens was praising snowmakers several times this past weekend at the Summit and we should all join him in celebrating the job they have done.  Mike mentioned a month or so ago that this might be the most impressive season for snowmaking, and I don’t think anybody can argue with that.