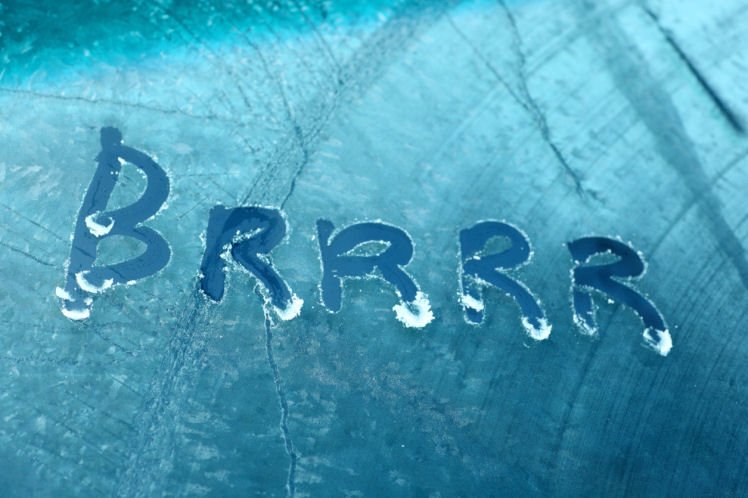 The first thing I noticed when I got in my truck this morning was that the windshield was lightly iced over and my thermometer read 34°. That was a bit of a surprise because I didn’t think it was going to dip quite that low last night or this morning. I was encouraged and thought that I’d see some snowmaking happening around the region.

According to two Beech Mountain weather stations it is 31.9° up there and the guns are not running. To be fair, Beech Mountain Resort’s website is reporting 39°. Kind of hard to make snow at 39°.

I just wonder if Beech’s resort weather pull is down because our own www.BeechMountainWeather.com is pulling from a station ON THE MOUNTAIN and we are seeing 29.7° which is ALSO close to what Sugar Mountain Resort is reporting this morning. I’ve often questioned whether that station isn’t tweaked to reflect a degree or two colder but regardless SUGAR IS MAKING SNOW from around their old mid-station and UP. We didn’t see any snowmaking happening there on the BASE or SUMMIT webcams…except around that middle part of the mountain. It happens that way sometimes and you have to hand it to Gunther and his people – they will make snow WHEREVER and WHENEVER they can.

So effectively speaking – there’s been no snowmaking at the North Carolina ski areas over the last couple of days AND none of those resorts are open at this time.

I was peeking in at Wolf Ridge’s LIVE STREAM and a week or so ago they had some pretty good coverage but it is all but gone now. Again – that is the “riverboat gambler” life of the ski area owner/manager. 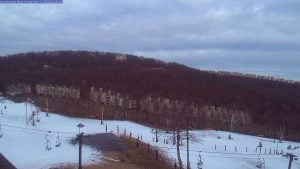 Capture from Wintergreen’s STATIC camera this morning! Click to Enlarge!

DITTO THAT SAME REPORT for the Virginia ski resorts with the lone exception of Wintergreen Resort which ACTUALLY looks like they COULD be open if they wanted to. They have not made snow in the last couple of days either…but that will change when all of the ski areas get back in the business of making snow Thursday. 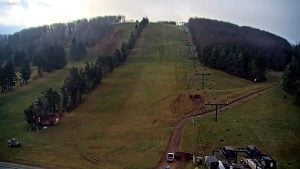 Waiting on the cold to hit tomorrow! Click to Enlarge!

Wisp Resort in Maryland is reflecting 31° but no snowmaking as yet…to the continued frustration of many of their fans. It’s hard to make people realize that NO COLD = NO SNOWMAKING.

Obviously that will change sometime tomorrow and I’ve asked Kenny Griffin to setup another set of timelapse captures at various ski resorts to show you guys JUST HOW QUICKLY these resort snowmaking crews can turn a mountain around.

WILD AND WONDERFUL (AND COLD) WEST VIRGINIA – BY GOD….

Canaan Valley’s David Lesher is showing a TRACE of natural snow and 27° this morning at Davis, West Virginia – home to both Canaan Valley Resort and Timberline Four Season Resort. Despite that temp we are not seeing any snowmaking.  Canaan Valley has some nice “whales of snow” ready to push around once they are ready to do that.

We spoke with Tom Blanzy of Timberline Resort late on Tuesday and he was going to check on the LIVE CAMERA (that isn’t live) but so far – nothing happening there. We tried calling in on the mountain to get in touch with anyone and they’re not answering their phones yet. They are still a week or so away from opening so things are still – preseason…which could be considered odd for a four season resort. They’re still struggling but taking every step that they can to get things “turned around” financially. There are 16 “players” at this “ski resort card table” and seemingly Timberline keeps drawing tough cards to play.

We posted an announcement on Tuesday that Timberline brought in Colonel Al Tomson as their new COO/CFO and you can read that at: https://www.skisoutheast.com/timberline-welcomes-colonel-al-tomson-management-team/

The bottom line is the owners of Timberline…as well as all of their longtime staffers are making every move they can make to succeed at stabilizing things at the Tucker County resort.

WinterPLACE Resort is reporting 32° but no snowmaking THIS MORNING but if things play out the way the weather is supposed to – they MAY start making snow tonight. Certainly by sometime on Thursday.

…and Snowshoe is…Snowshoe. It’s 29° there this morning according to Shawn Cassell, although their website is reflecting 25° at 9am. They are NOT making snow anywhere on the mountain HOWEVER they ARE the only ski resort open in the Southeast or mid-Atlantic and they are playing on 9 slopes and trails.

With yesterday’s rain behind us and some cool temperatures today, it should be a great day to get out there and shred. All the slopes are freshly groomed, and the rain had minimal effect our base. The mercury drops a bit more this evening, and our snowmakers are keen to keep expanding terrain over the next few days.

Progression Park is open with 9 features, including 1 jump, and our new Never Summer Pontoon.

Looking to save on your next trip to the Mountain? Check out our Early Season Pass that lets you ski or ride as much as you want until Christmas! Not what you’re looking for? Take a look at our other Deals & Packages at snowshoemtn.com.

THE LULL BEFORE THE COLD…

We are now hearing about some forecasted snow flurries to come into the region on Thursday evening to accompany the cold temps. If you stick your head out the window sometime on Thursday you will hear the “twin roar” of both ALL of the snowmaking equipment cranking up AND the roar of ski and snowboarding fans across the region as temps dive in the afternoon and evening hours tomorrow to around 14° around Beech and Sugar. Things will be a degree or two higher or lower depending where you look around the ski mountains.

I am certain that we’ll get another update from Meteorologist Brad Panovich in the next day or so, but the consensus of most weather gurus that we are hearing from seem to be saying that TODAY is the most pleasant day that we’ll have for a while. Of course for most weather peeps, their idea of pleasant isn’t what ours is. We think pleasant is 23° and snowy.  However, according the consensus forecasts out there we should see THE COLDER AIR WE’VE FELT SINCE FEBRUARY Thursday night through Friday.

Then we took a look at the forecasts for most of our ski areas and they are all forecasting highs in the 20s and 30s (with 4-5 40° days out of the next 15 days through December 21st).

We often use Snowshoe, Beech or another highest elevation ski area for reporting, and today we will use Cataloochee Ski Area as a snapshot of what to expect between now and the week leading up to the all-important Christmas-to-New-Year week.

We’re seeing the prospects of some natural snow on two of those days AND more importantly we are seeing snowmaking chances on 14 of the next 15 nights.

According to weather peeps across the region, we are looking at a VERY favorable weather pattern for the ski areas and those of us who want to ride their mountains!

With those kinds of temps and the prospect of little in the way of under-developed snow (rain) we should see MANY slopes and trails open up at YOUR favorite ski area.

Our Network of Ski and Resort Cam content ALSO includes weather content across ALL of your favorite ski communities. These “mother ship” weather content can be seen at www.HighCountryWeather.com. There you can find up-to-date weather content along with some stories. We’re still working the kinks out of making it even more resource-filled but all of the temps are pulled from stations on or as close to the ski areas as possible.

No matter which ski resort you call your favorite we have you covered with the following network.